Sunlight filtered through the green canopy as we stepped around the winter gate into the upper canyon. Because the road is closed to cars from November to July, dozens of people strolled up the lane. So many people in fact, the cute couple joining us for their engagement photos wondered how we’d get any shots without a crowd in the background. It was one of those magical summer evenings Utahns don’t take for granted and the canyon was full of families and couples, every parking spot taken, cars lining the lower road.

As my unofficial assistant, Mary is remarkably helpful on photo shoots– she knows how to hold a reflector just right, remove and replace lens caps and and elicit smiles from the most timid subjects. Skipping along in her gold sparkle shoes and twirly skirt, she carried her backpack and toy camera so she could take photos too. We’d just reached the bridge and set down our bags when a large crowd caught up with us.

The group laughed and smiled at each other as they noted the engaged couple (love fascinates everyone and seems to evoke a certain respect) and I think, maybe someone asked me a question…? At that moment a cyclist streaked around the blind corner at 30-35 mph and ran directly into Mary.

His tire struck her side, she flew into the air (she’s just a little thing– not yet fifty pounds), hit the ground and rolled several times. I was immediately on the ground cradling her, while a dozen people pulled out cell phones to dial 911 (no reception).

For a moment she stopped breathing and lay perfectly still, her body began to convulse and she revived in desperate gasps. I think, I’m not sure, she first asked about her shoes which had flown off in the accident.

I scarcely looked up as numerous people offered bandages and sympathy and “I’ll run down the canyon to call an ambulance.” But as the minutes passed, Incredible Hulk bandaids marking her numerous cuts and scrapes, it became evident nothing was broken, no serious injuries, her head never hit the road.

“I think you were caught by an angel,” I whispered in her ear, “I think it was Grandma Zoe.”

My cute engaged couple, Max & Michelle, could not have been sweeter or more solicitous. They repeated over and over (as did I), “I can’t believe she’s OK.” Let’s not even talk about the fact the cyclist didn’t apologize or even ask about Mary (last night I was just worried about Mary but now I’m furious with him).

I scarcely slept last night as I replayed the scene in my mind. Tiptoeing upstairs to check on my little angel, I found her wide awake, uncomplaining but simply stating, “I keep waking up because I hurt, but I think I found a comfortable position now.” 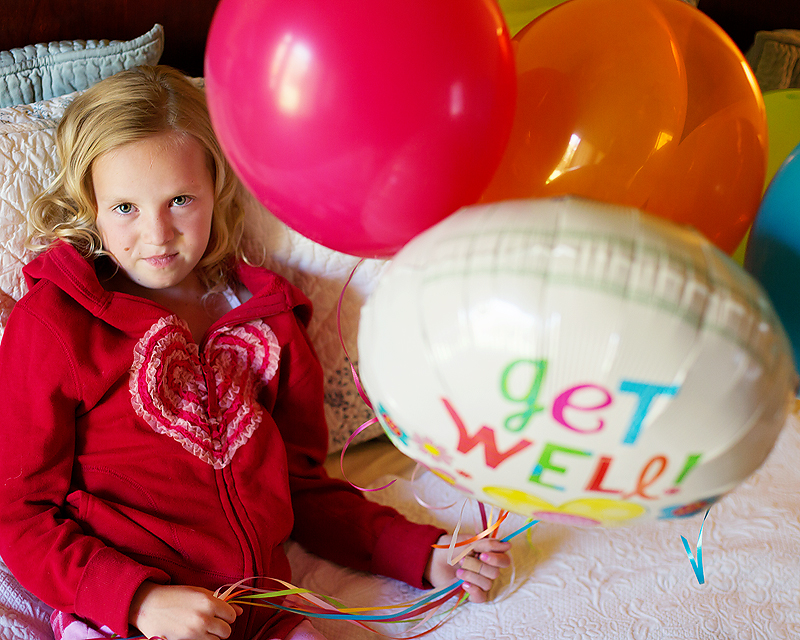 This morning, she’s sore, with an impressive collection of scrapes and bruises, but wondrously, miraculously well. And today, is the anniversary of my mother’s death three years ago.

I don’t feel bad for myself that my mother is dead (well, except for when I do). Losing a parent to death is part of the natural order of life. Oh yes, she died too soon and I’d give away my home and hearth to spend one more Thanksgiving with her, but a parent’s death is not a tragedy like the funeral Erik attended yesterday of an 11-year old boy.

And I am not motherless.

I can feel her joy when I use her Venetian goblets or her fancy sewing machine, I can hear her effusive praise at my children’s accomplishments and sometimes I feel her laughing in pure joy at their silliness. I know she approves of Mary’s fabulous collection of dresses and delights in my parties. My mother often said, “I might not be as smart as you, but I’m creative.” I think she was both and I find myself embracing my creative side as I grow older.

And most of all, I feel her watching over us, caring for my family, sending little messages. I’ve read in many books, and I truly believe, our loved ones on the other side devote most of their time to our benefit. Oh, you can say what you will, but this thought brings me a great deal of comfort. I don’t have a parent on earth; I desperately need one in heaven. When my grandma died last winter, some of the family joked, “Wait till Grandma gets to heaven and tells Zoe what’s been happening on earth!”

My thought was, “No, my mom will probably be the one explaining it all to Grandma. Mom knows more about this mess than anyone.” And don’t give me that garbage people are all happiness and light and ‘it doesn’t matter’ on the other side. I feel her anger over evil actions and her true sympathy for earthly troubles.

Last night was a miracle. I feel sure my mother caught Mary in her arms and perhaps whispered comfort in her ear. Mary remembers nothing of the accident, nothing until later when someone placed glittery shoes on her little feet. And I don’t know why the angels step in some moments and hold back at others– surely an angel could have saved Hunter last Friday or Jocie on the ski hill?

Do you have time for one more story? A friend, our old stake president, lost his son and daughter-in-law in a car accident. They left two babies behind who Lorin and his wife are raising beautifully. He knows pain, he knows loss. In stake conference he told this experience (I might have a few details wrong): On a trip to Hawaii, they were hiking with a niece who carried her newborn baby in a front pack. It had been a rainy fall and the rivers were raging, overflowing their banks. As the niece crossed a bridge she lost her footing and her baby fell into the turbulence. Can you imagine?

The young mother jumped into the water for her baby and the family watched in horror as the mother and baby moved rapidly out of sight. They ran down the banks, sliding on the wet vegetation, mud on their knees, fear in every muscle. And there was the mother clutching a branch, holding her living breathing baby boy.

Baby’s hooded sweatshirt had snagged on a twig just long enough for his mother to catch and hold him. As they stripped off that sweatshirt to wrap him in a warm blanket, on his little back was a man’s handprint. Too large to belong to the young mother, too recent to come from elsewhere, they knew he’d been caught by an angel.

Every time I recall that story, a shiver travels from my head to my toes, and I know, I know it’s true. I don’t know why at times angels step in as they did for Lorin’s niece or stand back as they did for his son and daughter, but I do know angels are among us. We are never alone. 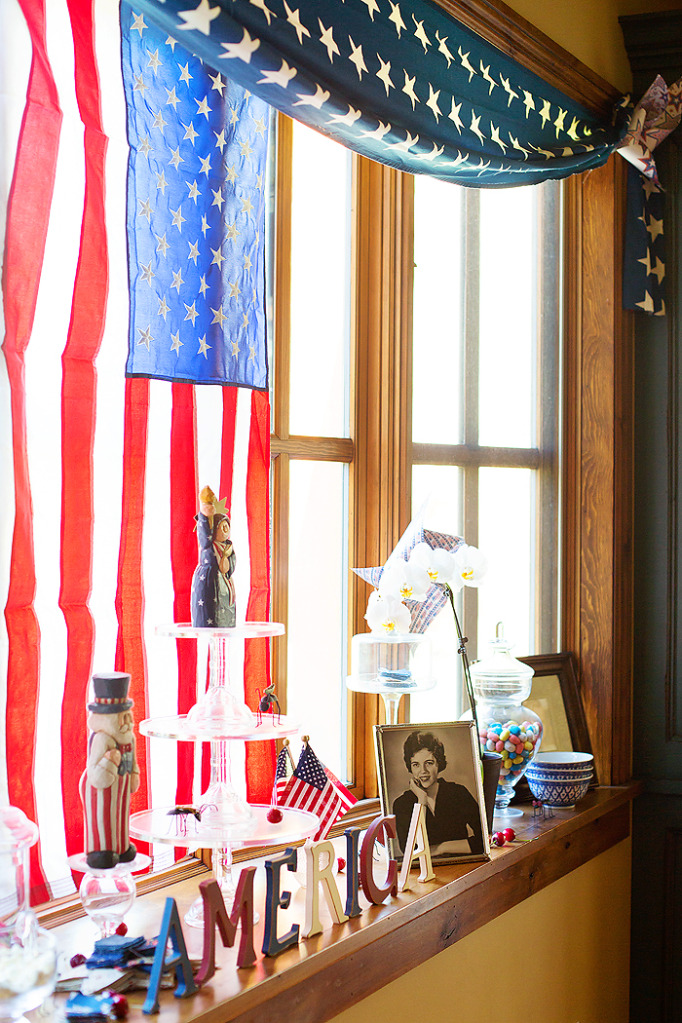 Since my mother died on flag day, I make a point of decorating with a mix of her things and mine–
I meant to have a flag quilt done by today… you can see the cut pieces on the windowsill.

the boys’ best video yet