back to school– the road well traveled

Our summer’s been filled with a lot of awkward conversations about where Gabe and Mary are going to school this fall. 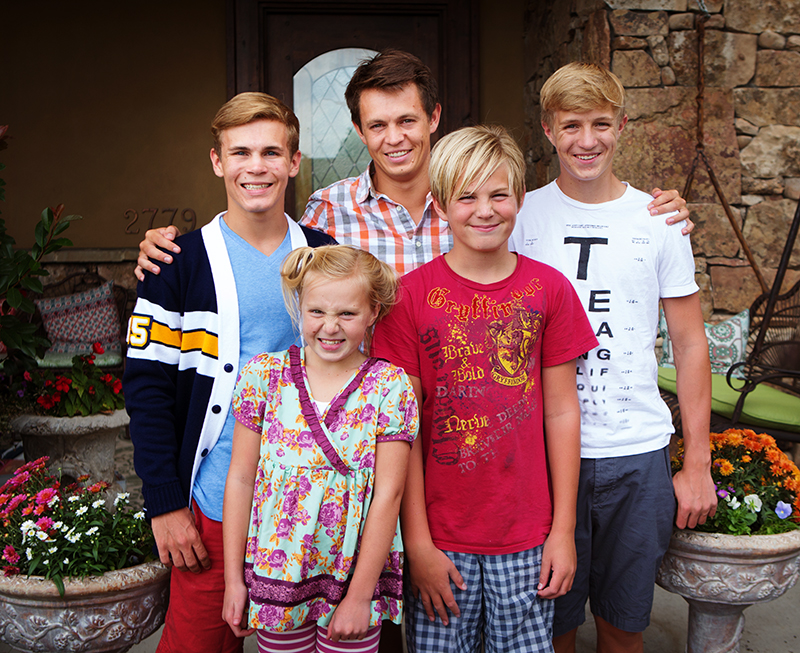 Last winter, Ben excitedly told us about a new charter school where some of his friends would be teaching this fall. Maybe you’ve heard about it? AISU: The American International School of Utah.

And if you know Ben, he can sell you on about anything. Ben exudes enthusiasm like the sun radiates light. He outlined every advantage: personalized learning, a shorter school day, an incredible arts program and a staff full of superstars. The staff… oh my. Just go and read those profiles. They’ve used every bit of new research to create the “perfect learning environment. After our conversation with Ben, we began hearing about AISU from several different sources, but when my friend Erica Glenn (just go read her profile. It’s OK if you feel intimidated by her jawdropping accomplishments. I do.) was hired straight out of Harvard to direct the arts department we took the plunge and signed Gabriel up for the middle school. Mary followed suit a few days later. She’s an independent soul who loves to direct her own learning.

So, all summer long, when people asked what teacher Mary’d been assigned to at our local school, or if Gabe was going to take orchestra, we had to explain over and over about AISU. It was hard to express why we’d leave our beloved neighborhood schools especially since we moved here expressly to attend these schools.

But we felt good about it. And when the rest of the neighborhood went back to school Monday, I took Gabe and Mary to the assembly at Skyline (more on that in a minute) and then to orientation at AISU. And we were even more impressed. We meet the counselors, teachers, success coaches, lots of other wonderful students and toured the beautiful facility. Everyone felt happy and confident.

And then, I woke up in the small hours Tuesday morning and KNEW it was the wrong decision.

Crawling out of bed, I made the familiar pro/con lists, weighed the options, woke up Erik to talk… but none of the lists mattered. I KNEW.

I’ve learned to trust that mommy intuition. The last time I felt it that strongly was the night after I signed Hans up for a competitive soccer team. He’d tried out for the team with all his friends, attended the meetings and I wrote the rather hefty check for team dues. And then, I woke up in the middle of the night knowing it was wrong. The next morning I drove to the coach’s house, tore up the check and sorrowfully informed Hans of my decision. For YEARS I worried I’d done the wrong thing. The soccer boys (and they were and are really lovely boys) dropped Hans from their group (not out of malice, just proximity) and he had a couple very lonely years. But when I apologized to him about it years later, he interrupted me, “Don’t apologize! That was one of the best decisions you ever made.”

So, on Tuesday morning I woke up Gabe and Mary saying, “You’re going to school.” They protested at first, but obeyed. Gabe arrived to orchestra almost an hour late but to a very sweet chorus of, “GABE!” when he walked in the door. He missed all the orientation and instructions on when to go to lunch or how to open his locker, but he also missed all the “Oh no, you’re starting junior high!” angst.

Mary had a similar reception in her fifth grade classroom with all the kids crying, “Mary! We missed you yesterday.”

A sense of peace trickled from my head to my toes.

And that afternoon, when everyone gathered at the counter sorting out all the release forms, pencils, folders, glue sticks and first night of homework a sense of peace hovered over all the chaos. A blanket of stress that I didn’t even know existed was lifted from our family. Mary hugged me around the waist, “This morning I thought you were wrong. But you weren’t. And I feel really happy.”

Still, I think AISU looks amazing. And if you’re unsatisfied with your local schools or just want to be part of something wonderful, you should go check them out. 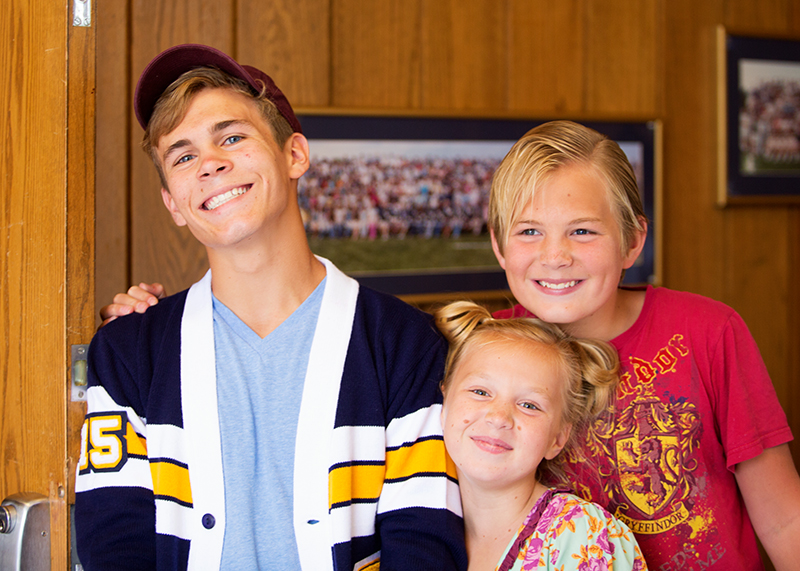 On a lighter note, because Gabe and Mary didn’t start on Monday, we were all able to attend the HELLO Assembly at Skyline. This won’t happen every time around, but both Hans and Xander were in some of the videos, Hans was dancing on the stage and one video was all about Hans…. 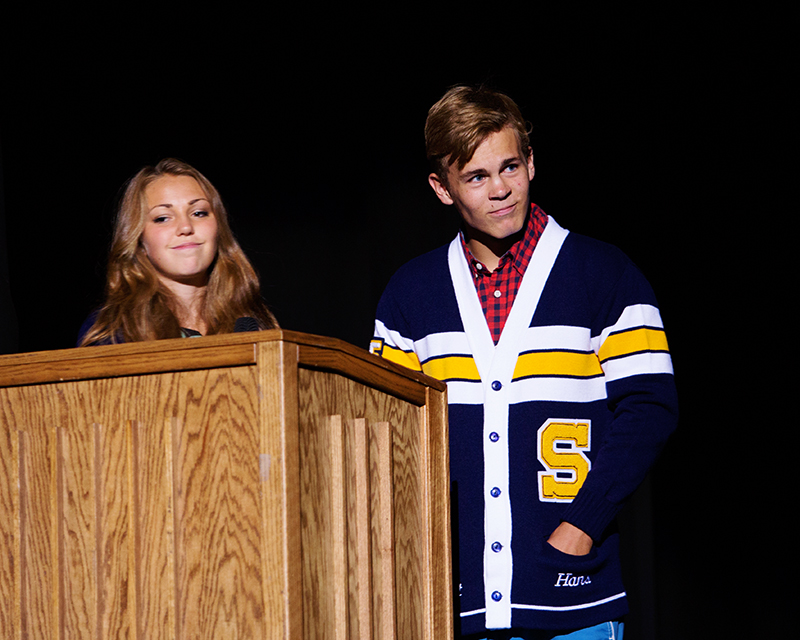 In an effort to encourage boys to ask girls to the Homecoming Dance on Sept. 20th, they made a video about Hans’ failed attempts to ask a girl to homecoming.

This is the moment when Sarah said, “Hans do you want to tell us about it?”

And I promise I won’t share every single thing Hans does this year, but my awesome neighbor Ezra created this video and I so admire his talents (you should check out his sports video too— it’s a work of art).

and his sixth attempt: Honey, ‘wood’ you go to homecoming with me? 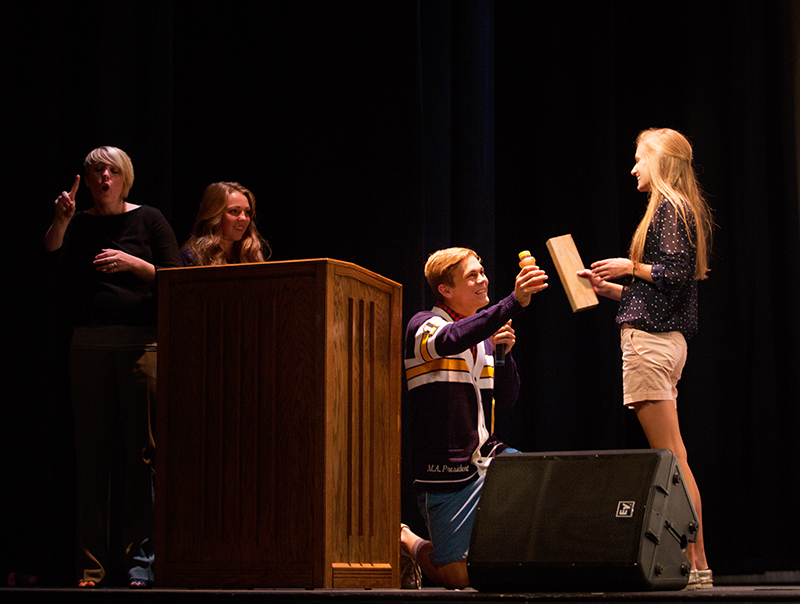 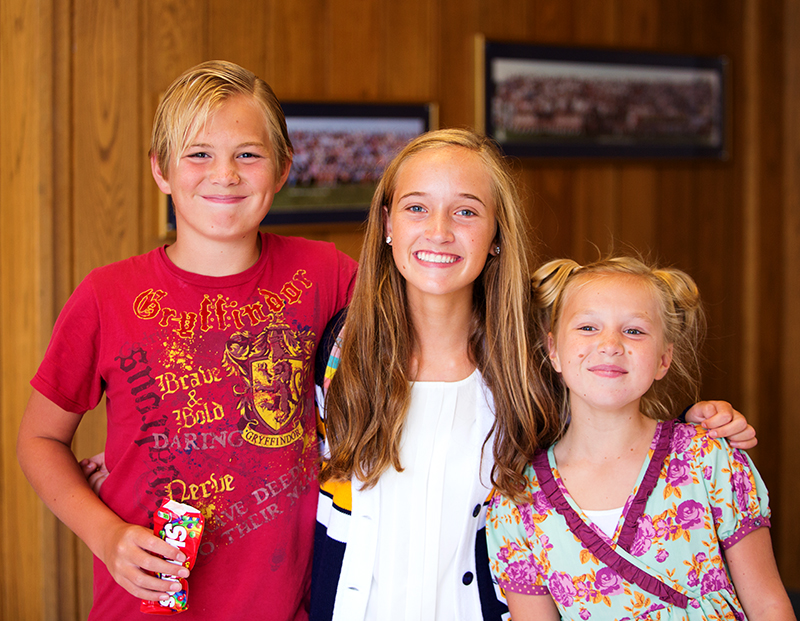 With our darling friend Annie after the assembly (everyone got a free pack of Skittles– I think Gabe and Mary are looking forward to high school already). 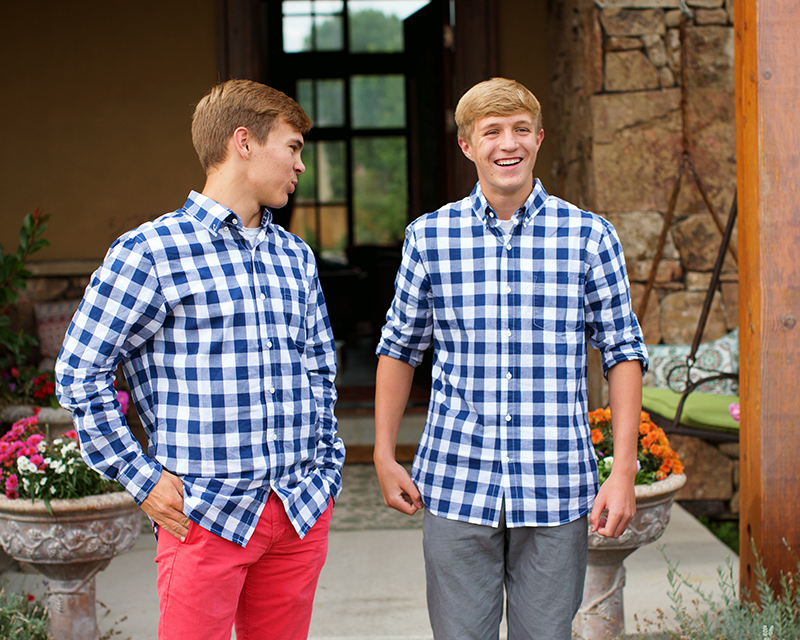 All last year, Xander walked up from the jr. high to take two classes at Skyline, so although it’s his first year of high school, he’s feeling pretty comfortable. But most of the credit goes to Hans. A lot of siblings don’t want their little brother around, but Hans has included Xander in everything: skiing with friends, hiking, swimming. Whenever people invite Hans to a party they usually extend an invitation to Xander as well. So much so, that even when Hans was in the Philippines this summer, Hans’ friends still included Xander. And for that (and a million other things) I’ll be eternally grateful to Hans. He knows Xander doesn’t diminish his own status, but rather increases it. 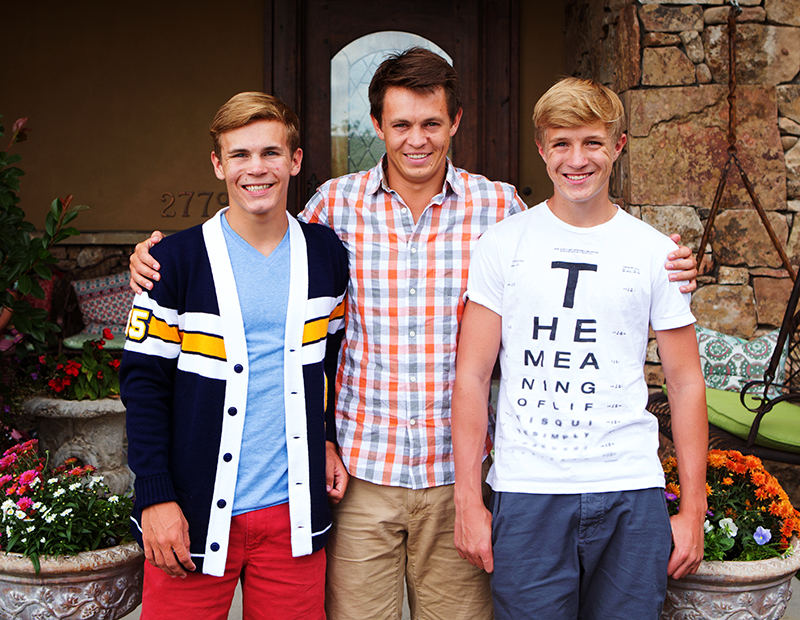 My beautiful boy moved down to Provo yesterday after a fantastic summer (if you want to see what it’s like to take to someone who speaks with a thousand exclamation points just ask Ben about Jerusalem). He’ll be teaching Italian 101 at BYU and taking all kinds of interesting classes. And I’m not one bit worried about missing him. Because I have a car, and I know my way to BYU. 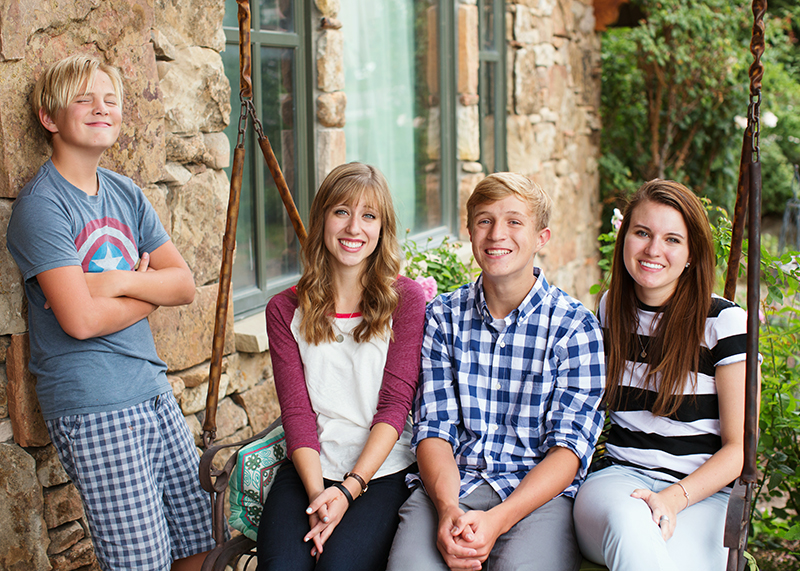 And as if this school year wasn’t fabulous enough, our friend Abby White (on the right) moved from Massachusetts to Jessi’s house (on the left) to spend her senior year at Skyline. It’s like gaining a sister, daughter, best friend for our entire family. 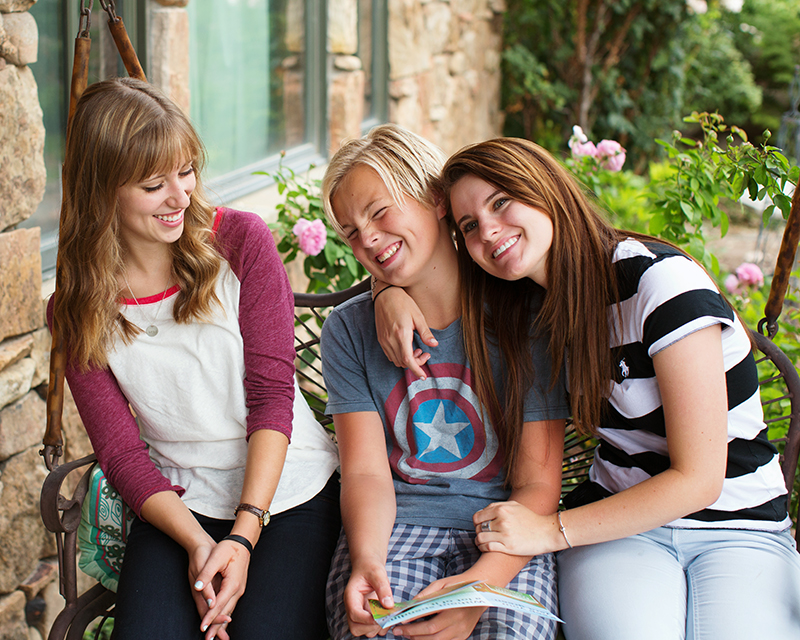 Here’s to a happy school year for everyone.

Oh and just for fun, The Skyline Lingeries Dance Team (the senior boys squad who every so slightly mock the girls’ cheerleading and dance clubs).

indulgences– the back to school edition