Undoubtedly, the highlight was Erik running into the field, hands waving above his head, stripping off his hat and jacket and finally mooning the entire cemetery.

But if you had three bees at your neck and two down your pants, you might do the same thing. 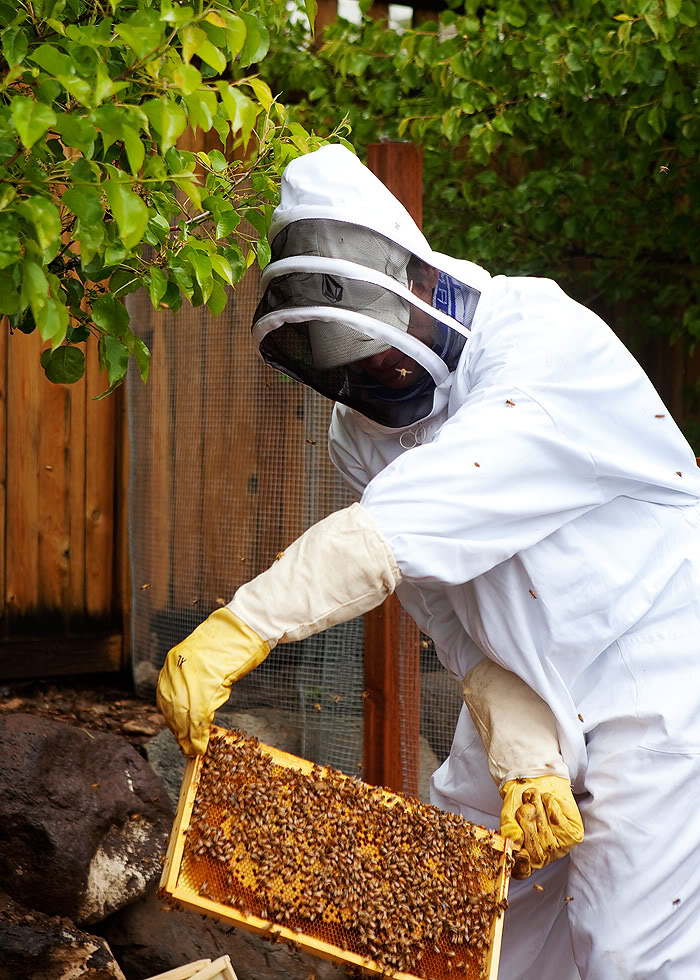 When our fabulous and adorable friends, the Garlicks visited for Ben’s farewell, Dean looked into our backyard and declared, “You need bees.” He then strolled around our chicken coop and mused, “I think we need chickens.”

On Dean’s suggestion, we ordered Beekeeping for Dummies (an awesome book which I highly recommend even if you don’t want bees) and by page 20 we were hooked; the order of the hive, the bee nursery, building comb, harvesting honey, ahh! the bliss! Xander and I went around the house spouting beefacts nonstop– “Did you know the queen only mates once in her life?” “Did you know she lays 2,000 eggs a day?” “Did you know the breed of honeybees in America are called ‘Italians’?” “Did you know most bees are girls?”

I’m convinced a beehive is the ultimate science experiment. Really, they are essential to my children’s education. 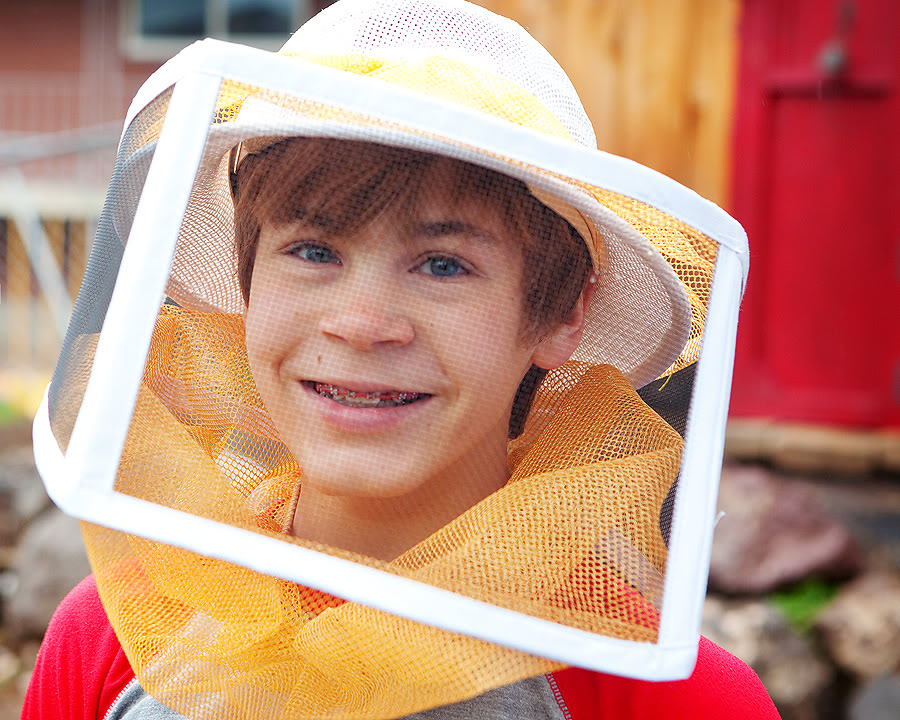 In a similar matter, the Garlicks bought Chickens for Dummies and also fell in love. Chickens are much simpler than bees (so we’ve been pestering the Garlicks with a lot more questions)– and also easier to name, we’ve really been struggling to come up with 68,000 names for our new little honeybees.

It’s been a great meeting of the minds as we text, call and email back and forth, trading beekeeping supply lists for chicken coop measurements; exchanging ideas on chicken breeds and discussing hive construction. 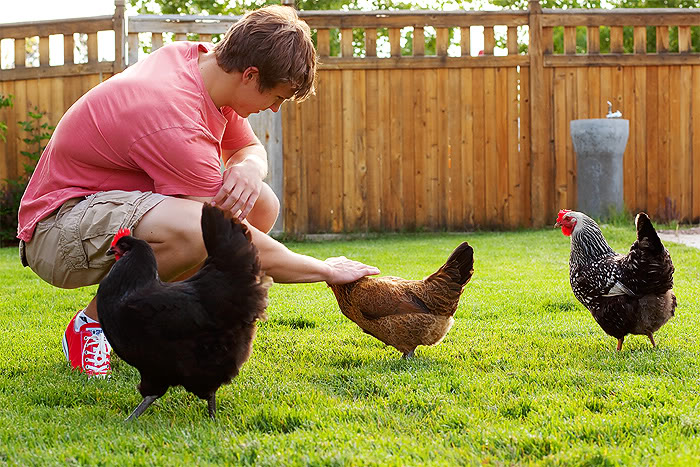 If anything, we are even more enamored of our chickens this year than last (maybe because we aren’t spending every spare minute building the coop?). Our older chickens are sleek, beautiful and each lay an egg almost every day. They cluck and run to our feet as we approach the coop and just generally make us feel cool. 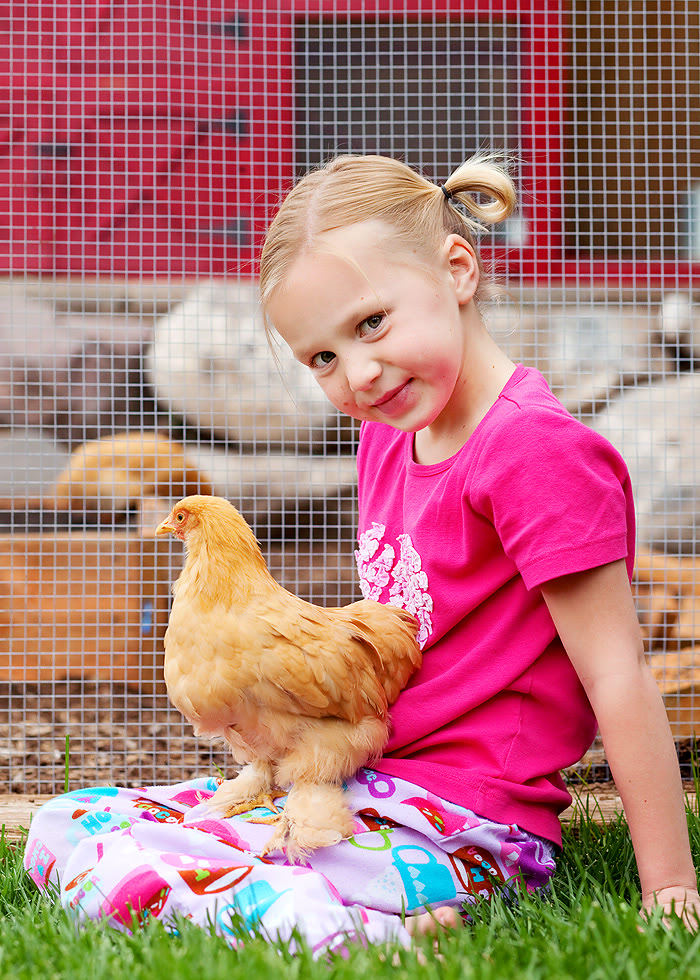 After moving the chicks into the yard a few weeks ago we discovered that the chickens form cliques just like teenage girls. The hens want nothing to do with the newcomers and refuse to associate with them. Our poor little babies huddled in a corner of the yard (in the rain, of course, because we’ve had nothing but rain this spring in Utah), until we placed them in the coop each night. I imagine time will make friend of all our chicks, but I love both groups. Their simple presence in the yard makes me feel happy and alive. 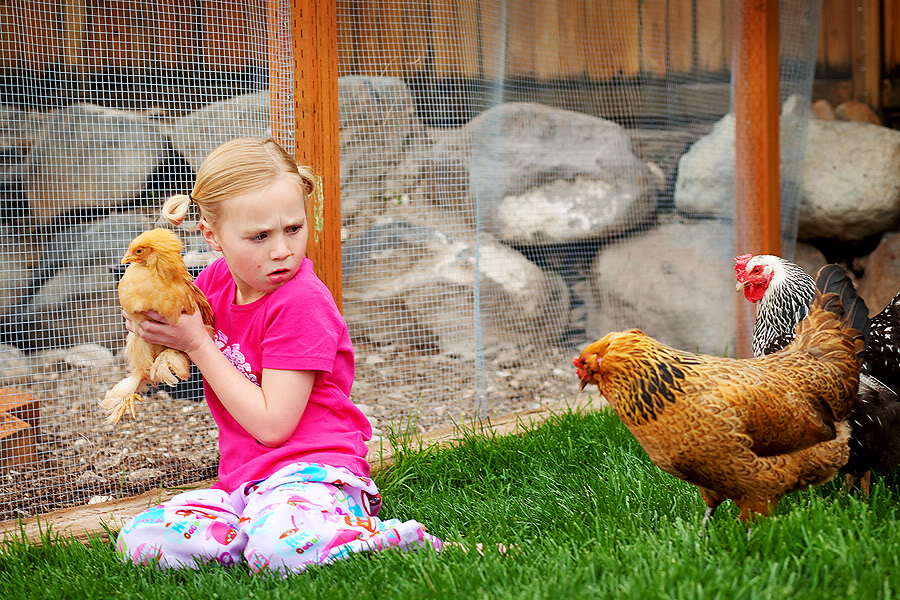 Three weeks ago, our gracious mentors hosted us in Logan as we moved a queen and brood into our two freshly stained hives. Mary basked in Lisa’s loveliness, while the boys tortured Dean with stupid puns.

The bees had to acclimate to their new home, so we drove back to Salt Lake and readied the yard for our baby bumblebees.

Finally beeday arrived. Dusk was falling and rain (yes, rain, again) streaked the windshield as we navigated the snaking road behind the old cemetery. Nestled behind the last gravestone is the beeyard where one hundred hives swarm with activity. Emerging from the car, Erik took pity on shorts-clad Stefan and offered him the bee suit– Erik would be fine in just a jacket. 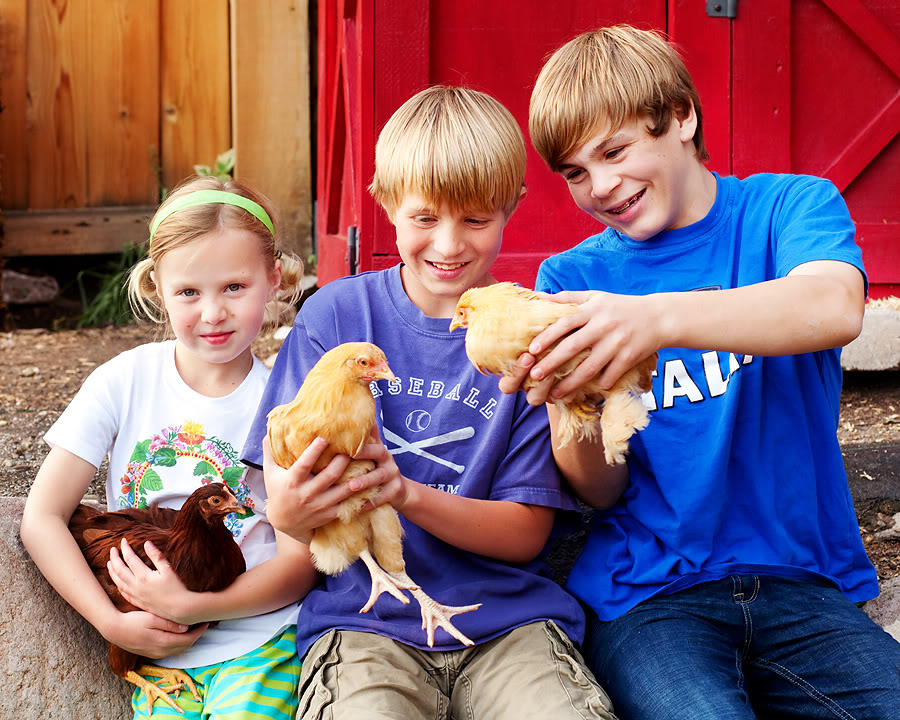 Honeybees don’t bother you unless you bother them, they are not like wasps or yellow jackets who invade your picnic or scavenge through your garbage cans. Bees love blossoms and pollen, raising baby bees, working in the hive; suicide is pretty low on their happy list.

But picking up their hive and transferring it to a trailer? That would qualify as bothering them. Angry bees sought every available bit of Erik’s flesh, sneaking up his shirt, circling his neck and yes, flying up his pantlegs. Holes in Stefan’s Converse did result in one sting on his toe, but he was otherwise unscathed. After consuming masses of Benadryl and swelling like a balloon, Erik announced that he didn’t care if Stefan was in a Speedo next time– he’d be wearing the bee suit. 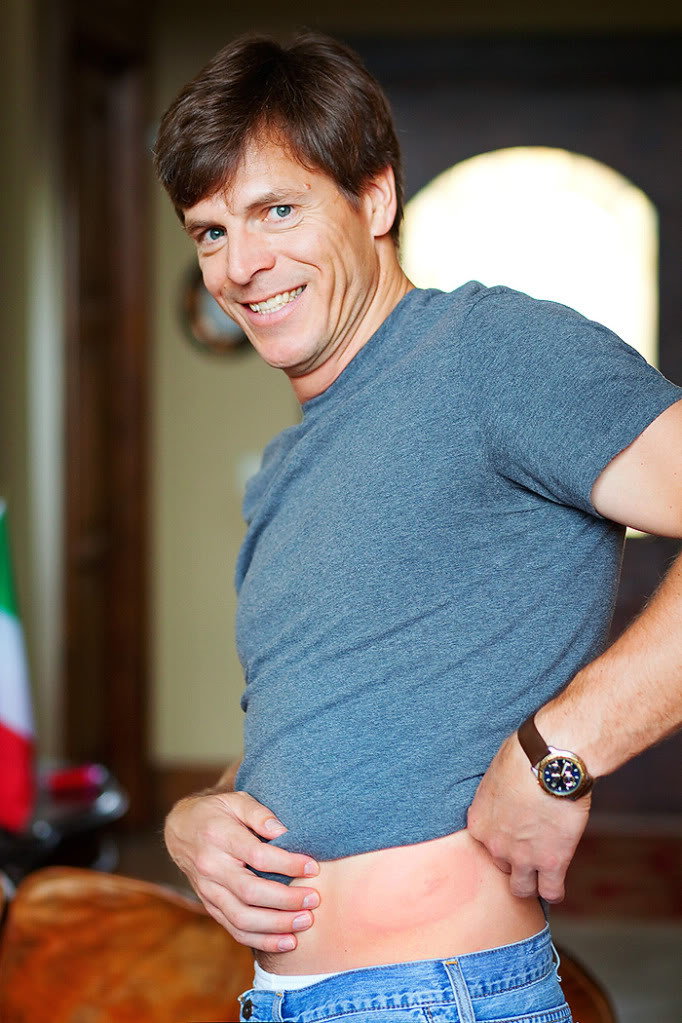 Why is he smiling in the photo? Really, that’s an awful welt. I think I’ve trained him too well to just smile when I pull out the camera. 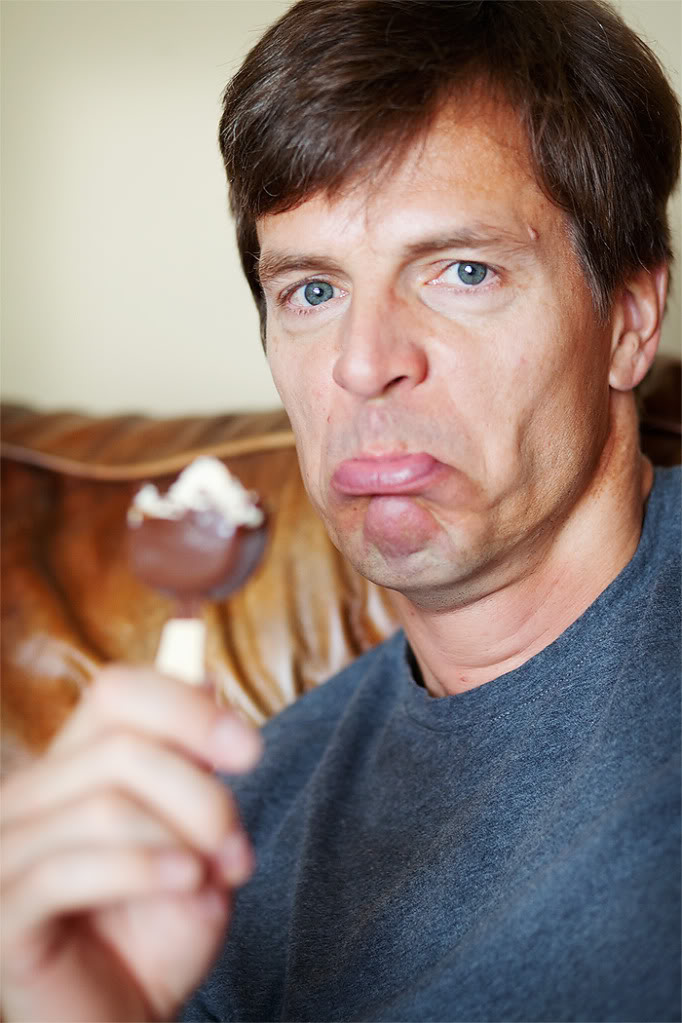 I bought him lollipops (really, really good lollipops) to make him feel better.
To Erik’s credit (I think he must be allergic) he rallied by the next day to build stands and rearrange the hive. But he dressed a little more carefully. 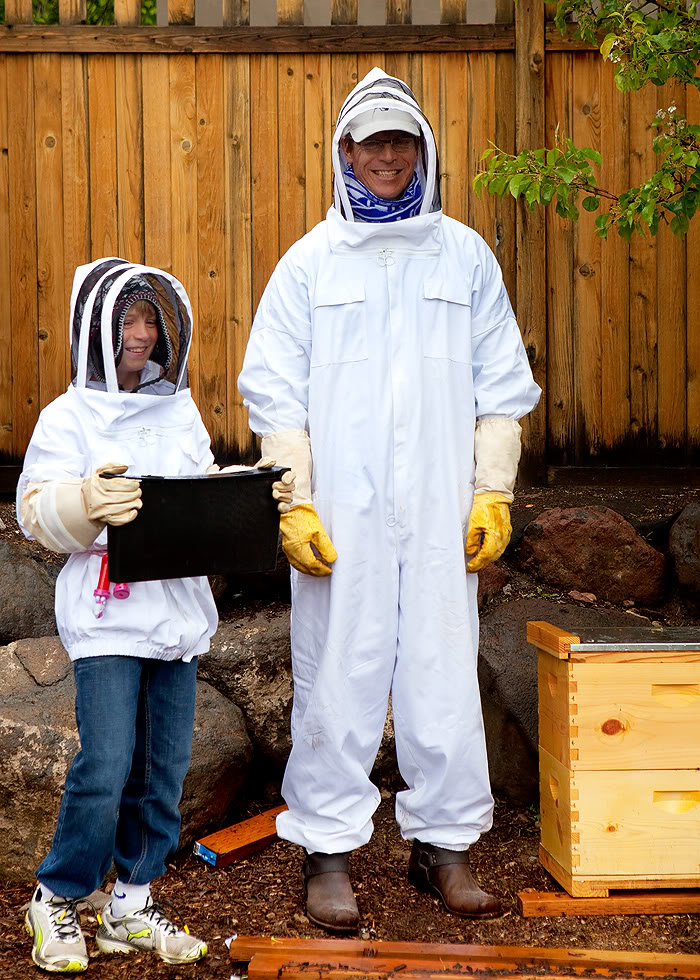 Note the scarf and winter hat. 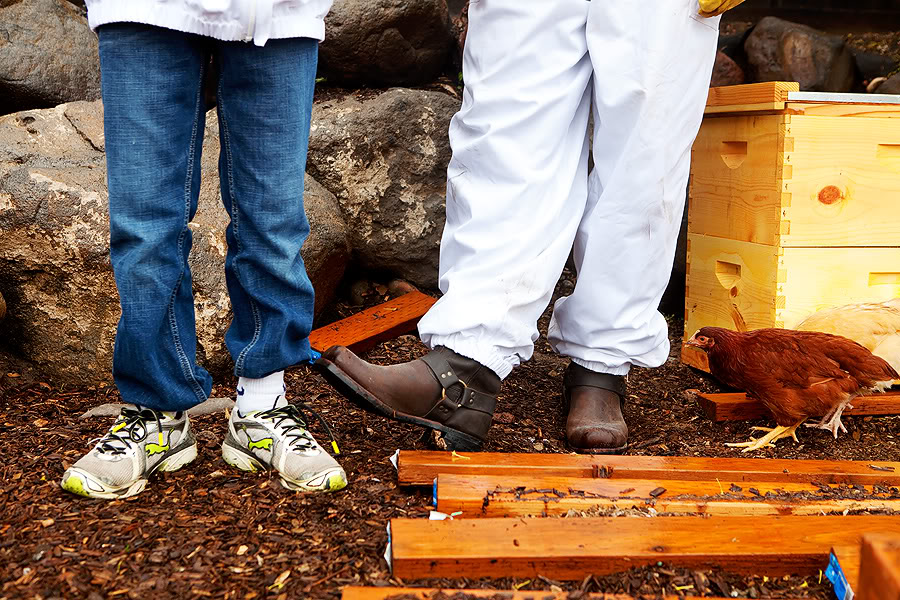 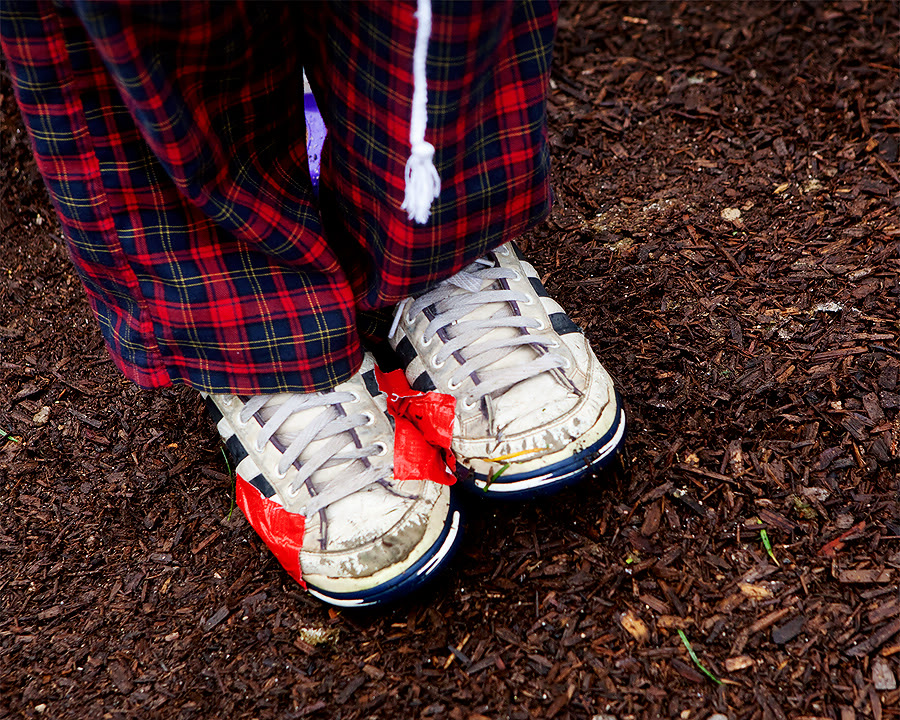 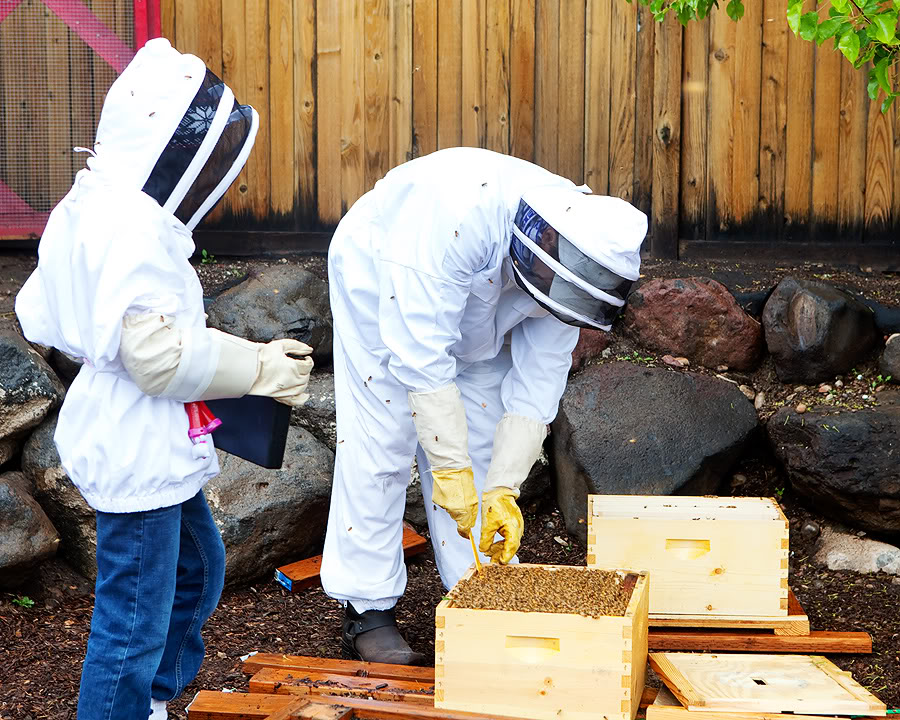 that’s lot of bees! don’t they look cool? ’cause they really are. 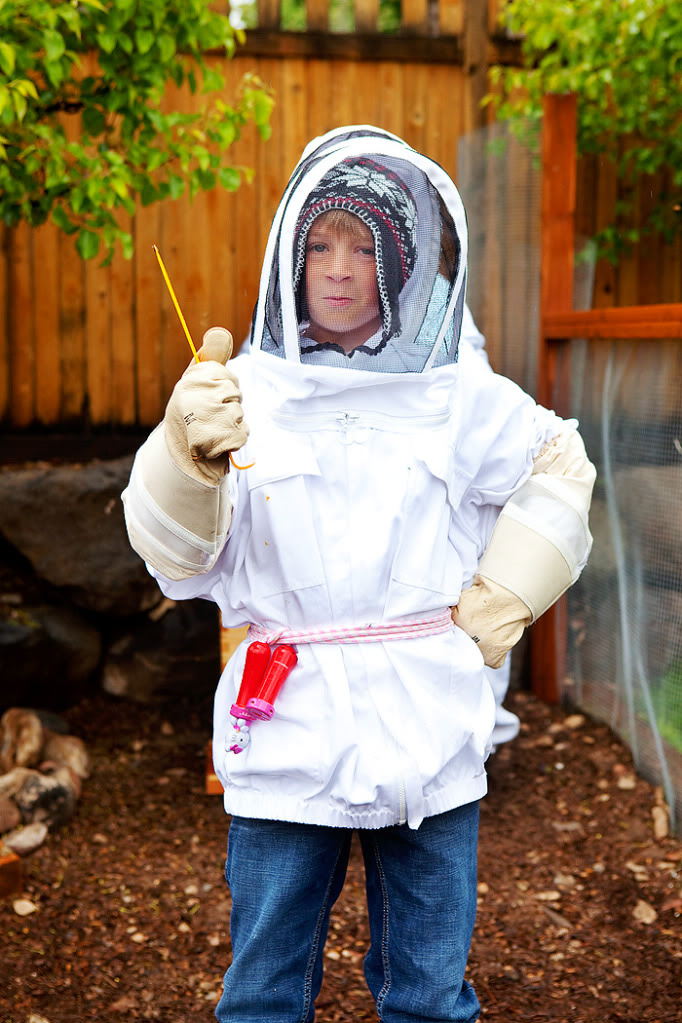 Doesn’t Xander look imposing with his hive tool and Hello Kitty jumprope belt?
Happily, no one has been stung since we moved the bees into our yard. Obviously, the fence doesn’t contain the bees or the chickens– they are all good fliers. But it does protect our neighboring toddlers from wandering too close to the hives. 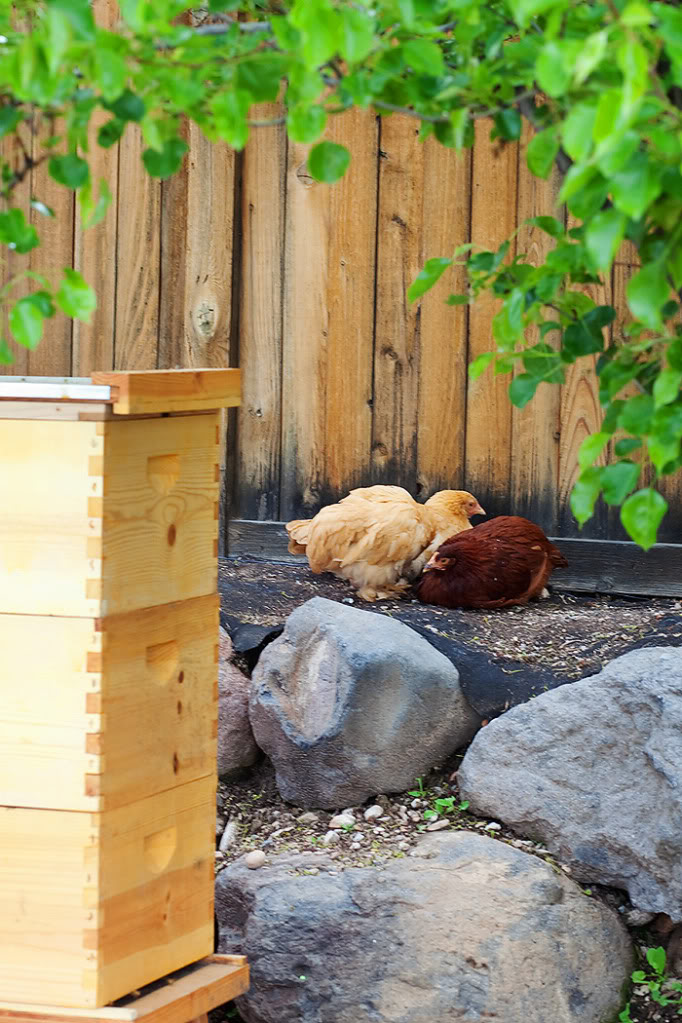 And it’s amazing that both the birds and the bees choose to stay in our little corner of paradise. The chicks actually seem to enjoy lying next to the hive and enjoying the buzz of activity. The bees fly up and out and aren’t visible in the rest of the yard.

All this life outside my window, the buzzing and clucking, tomatoes flowering, children chasing the chickens and placing their ears against the hive– it heals me. It feel like hope. 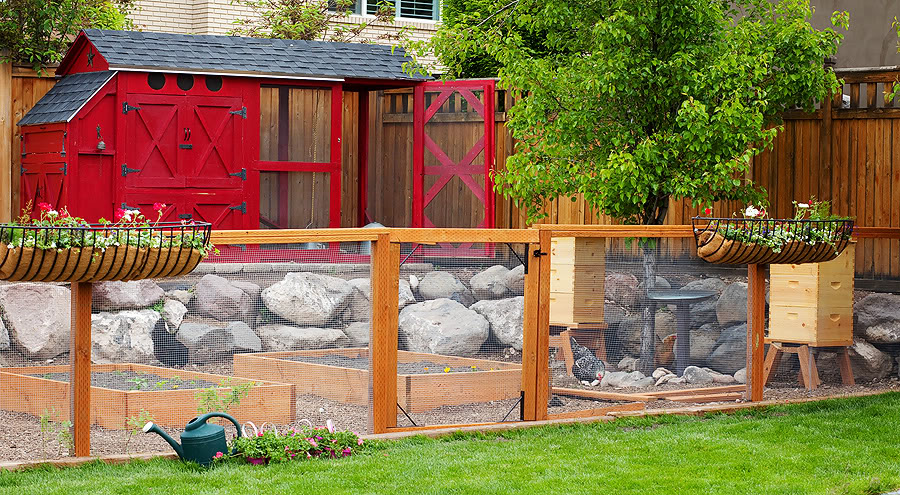 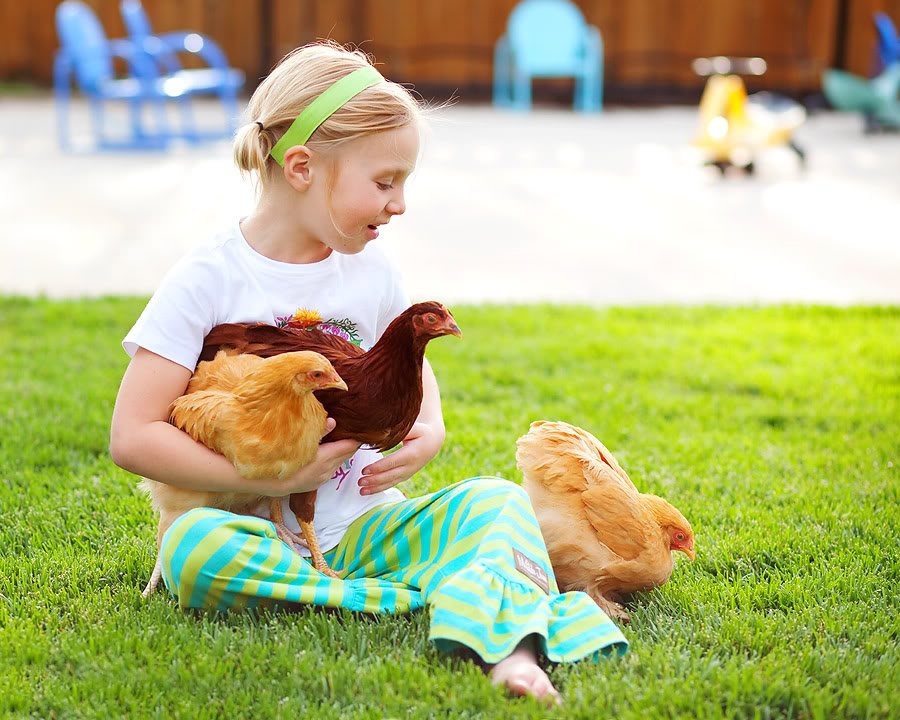 p.s. we do have a back-up plan in case the neighbors get stung– a blissful little orchard where the bees could drink from blossoms all day long.