I know so many people born on Feb 3rd: a little girl I baby sat, a college boyfriend, Sammy Strong, Katie Christensen and more. But the little baby who turned my world upside down was born 8 years ago today.

I had seen Zaila at church and around the neighborhood. Stunningly beautiful with long dark hair, beautiful features and an incredible smile(she’s NEVER had a cavity!) I found her a bit intimidating. More than a little overwhelmed with my four little boys I had only talked to her in passing.

One Sunday after church when she was 8 months pregnant Zaila approached me and asked where I found baby Xander’s clothes. I always love to talk clothes and began telling her about my favorite stores and when they had sales, blah, blah, blah.

Zaila listened quietly, then replied, “Well, I really only need to buy one thing. Something to bury this baby in.”

My heart stopped for a moment as Zaila explained that her in utero baby boy had hypoplastic left heart syndrome and would live for only hours, days at best.

Baby Britton’s heart defect had shown up in a routine 19 week ultrasound. The technician smilingly told them they were having another baby boy to join 18 month old Mason at home. But as she came to the heart she stopped, smiled again and asked them to please come back the next day.

Zaila and Bruce were wholely unprepared for the diagnosis the next day. Even with several surgeries and medications Britton’s chance of survival was less than 3%. They were strongly encouraged to abort.

After praying, fasting and carefully weighing the options they decided that the series of operations, the tortuous medications and the miniscule odds of these methods prolonging Britton’s life for even a few months would only give him a life of agony. They had rejected the first option—abortion —but they weren’t going to give him life only to prolong his pain; they decided to let him die with dignity(I believe medical technology has advanced in the past few years but I know this decision still faces parents. I am sure it is a difficult and very personal decision no matter the choice made.).

I got to know Zaila a bit in the last month of her pregnancy. It was a strange waiting period: no eager preparations, no crib set up in anticipation but the simple assurance that as long as baby remained in the womb Zaila’s heart pumped his blood for him.

We had a ward fast and she confided to me that her mother fasted every week, praying for a miracle. We all thought there might be a miracle; that his little heart would heal itself.

A few days before her due date I spotted Zaila with a short new haircut. When asked she replied casually, “Oh, I donated my hair to cancer patients. They need it more than I do.”

Early on February 3, 2000 I was running along a canyon road and had the clear impression that Zaila had delivered her baby and I should go visit her in the hospital.

I argued with myself– she had plenty of family and friends and wouldn’t want a mere acquaintance to barge in on what may be her baby’s only day of life. But the impression persisted and I decided to go.

Zaila was truly happy to see me. “I want people to see him. I want people to know him.” I had expected a sickly looking baby but Britton was a stunningly beautiful, dark-haired 8lb. 9oz. baby. He appeared perfectly healthy. Holding him was like touching heaven.

The nurses at University Hospital carefully made castings of Britton’s hands and feet- perfect little concrete replicas. I noticed Bruce taking photos with a boy scout camera. “I have a good camera.” I bragged. “May I come and take pictures?”

Thus began our real friendship. Baby Britton came home the very next day; his parents wanted memories of him in their little apartment. And I came over to take photos.

My skills were pretty limited but if you take rolls and rolls of exposures you are likely to capture something beautiful. We photographed every angle of his angelic face,his feet, his hands, mom rocking him, dad snuggling him under his chin, big brother Mason admiring him.

Recognizing my limitations I called a professional photographer who lived in the neighborhood. This man was truly the pariah of the neighborhood. A stickler for rules he got the first grade zoo field trip cancelled because they asked for a $2 donation from each student; he turned in old ladies for failing to water their lawn.

But I knew he was really a softie. Within minutes of calling Doug, he arrived with his super-duper camera, lights and usual gruff manner.

“Mom sit here, dad there. Don’t you have a clean white sheet? Get that lamp out of the way.” 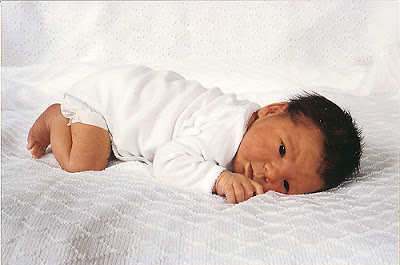 I visited Britton every day for the next week, filling in between her family and friends. Zaila and I found we had so much in common– we loved the same books(even now our bookshelves are eerily similar)and had many of the same interests and hobbies. Between caring for Mason and Xander and admiring beautiful baby Britton we found plenty to talk about.

Britton’s short life was a perfect one. He was held every moment. His grandparents spent hours rocking him. Cousins, uncles, aunts, friends and neighbors visited. Britton’s beauty overwhelmed everyone who saw him. Bruce and Zaila opened their home and shared their joy in this new little life and their grief that he wouldn’t be able to stay. They easily could have shut the door and turned people away but they opened their hearts and let us all in.

As the days stretched on baby Britton became increasingly uncomfortable. Zaila spent much of her time holding him and doing the familiar mother’s sway that miraculously comforts little babies. As he approached his one week birthday we knew his time was almost gone. My friend Katy and I surprised Zaila with a one-week birthday cake early in the morning. Already he was having small heart attacks.

As the day progressed I was busy with my own children but thought constantly of Bruce and Zaila at home with their dying baby. I felt sure I would know of his passing, but the hours stretched on.

When Erik came home from work I rushed over to Zaila’s apartment. Unwilling to intrude I stood on her front porch and simply waited. Within moments Zalia opened the door. “I knew you were here.”

Sweet baby Britton was miserable. Bruce lay with him on the bed cradling his little head and talking softly. Zalia had called her mother but she was not home. “I can’t stand to see him in pain anymore.” she cried.

And then, as clearly as someone walking out of a room, Britton was gone. A doctor friend came over and confirmed his passing and urged Bruce to call the mortuary as soon as possible. “You want to remember him as he is– don’t let death settle in too much before they arrive.”

Soon, too soon, the mortician arrived. He was kind and polite but he was a mortician– he was a little creepy. Watching Zaila hand her precious baby to this strange man was the saddest and cruelest moment I have ever witnessed.

This story continues, but I’ve written enough today. Suffice it to say that over the next few days I clearly and distinctly knew that I needed to have another baby. And on the day of Britton’s funeral Erik had the same impression. I feel sure that Britton sent that message to us.

And even still when I have a really bad day, when I feel like God doesn’t love me and I have no value in the world, I remember that God led me to Zaila. That she let me be a part of her life that I was able to hear the word of God just for a moment.

Bruce and Zaila are doing beautifully. They have since had three more sons(putting them in the coveted five boys club) and Bruce works with Erik.

Zaila never answers her phone and rarely returns messages, but I know she reads my blog. Zaila, I love you, thank you for letting me in and changing my life.

a funeral, a baby, a birthday and lots of weddings