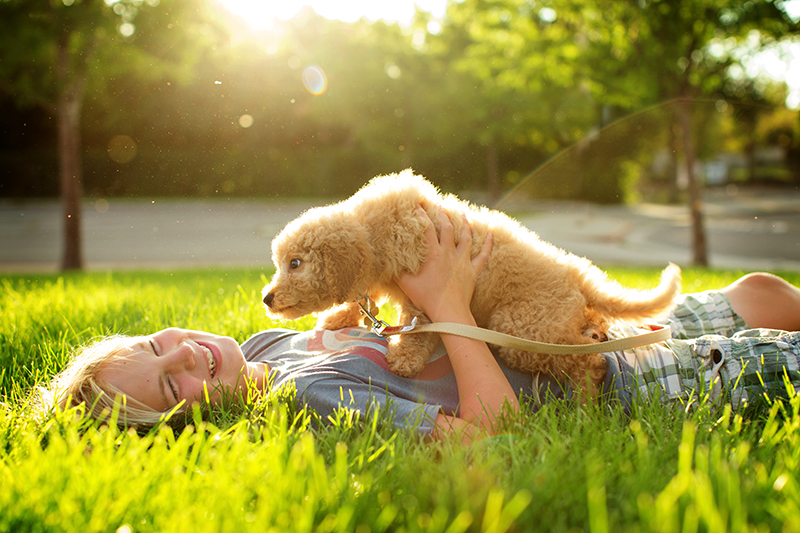 My darling boys–it’s been an eventful week. 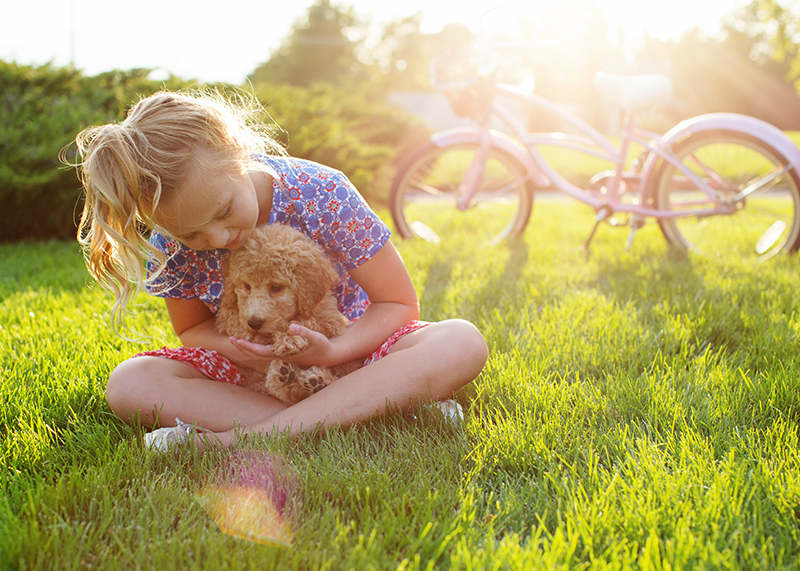 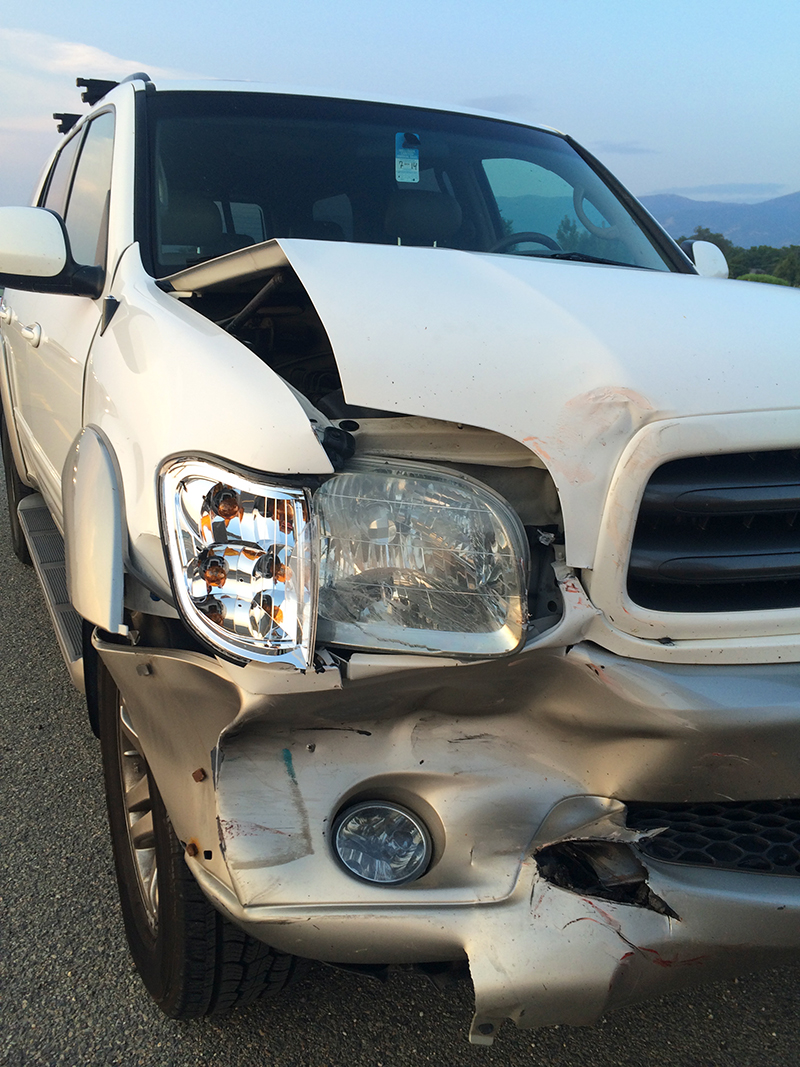 Let’s start with the puppy. 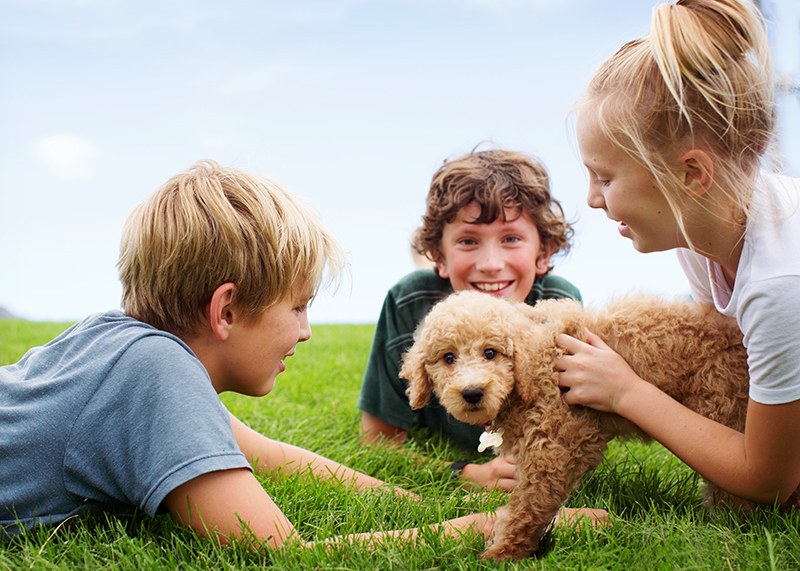 When the Garlicks’ beloved Izzy died, we told them we’d get sister siblings when they were ready. Izzy had charmed us with her cheerful personality, playfulness and willingness to be used as a photoprop and a pillow. 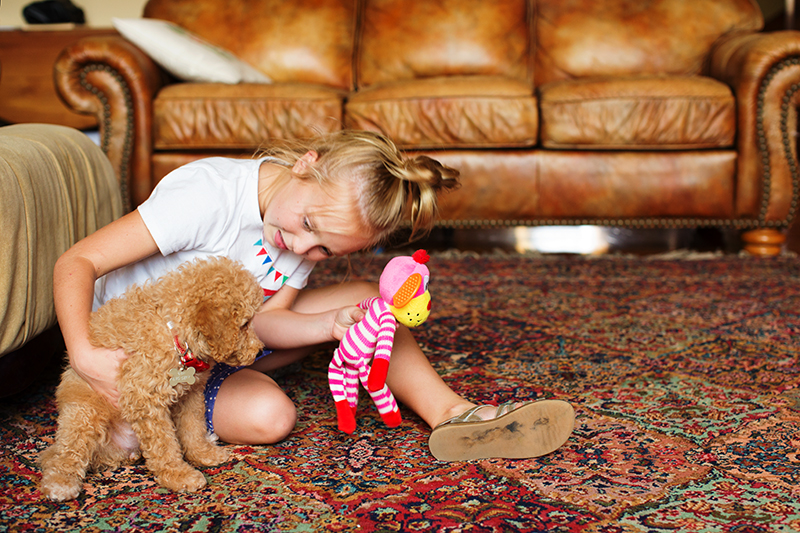 We thought it would take the Garlicks a while to replace Izzy, and I was fine with a vague, “Someday we’ll get a dog.” But Tuesday morning, we received a photo of Chet holding two puppies and a text from Lisa: “We’re getting the one on the right Her sister is available. Interested?” 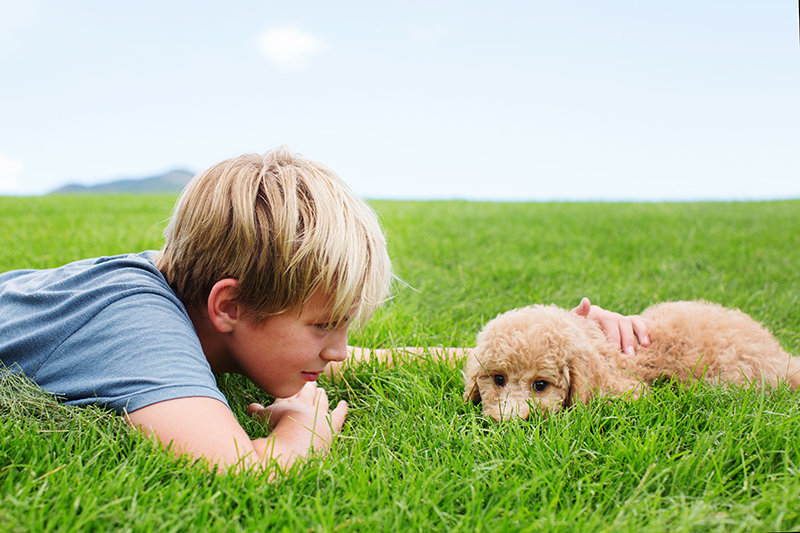 Maybe it would have been wise to ponder the matter a bit, at least call Erik (away on business in Wisconsin) or consult Hans and Xander (away in Idaho) before replying, “YES!”  But Gabe and Mary were already finding shoes and racing to the car. 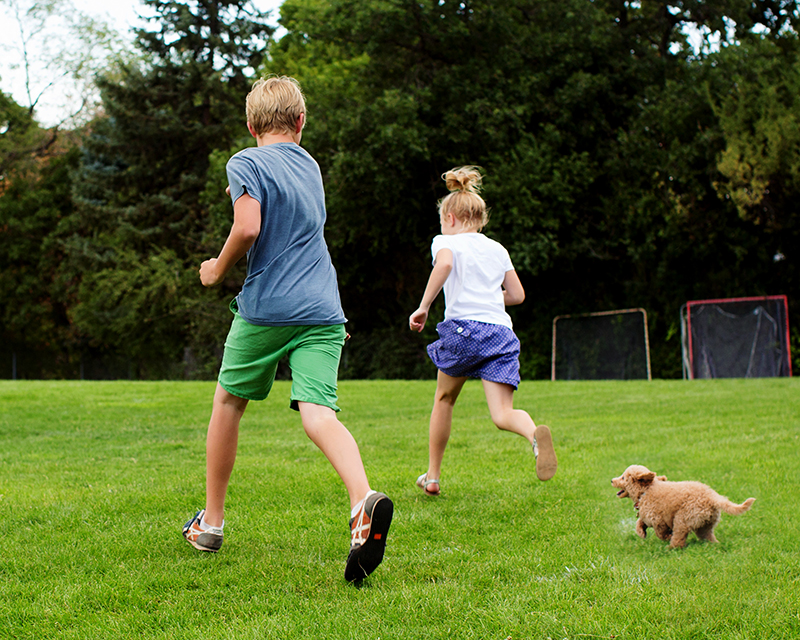 We did slow down long enough to stop at Petsmart, sign up for a frequent customer number and walk around the store blindly throwing everything in the cart the dog breeder told us everything we needed. $300 dollars later we were on our way to Roy, Utah and for me pure terror began to settle in. 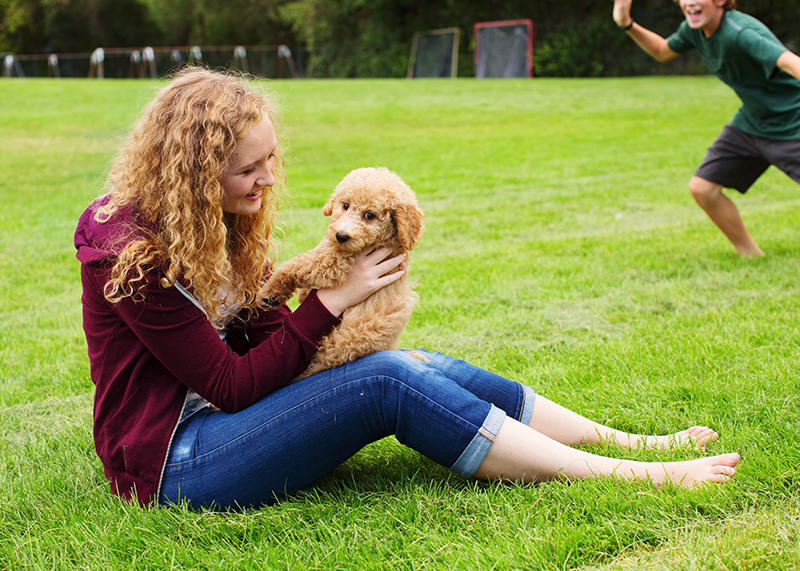 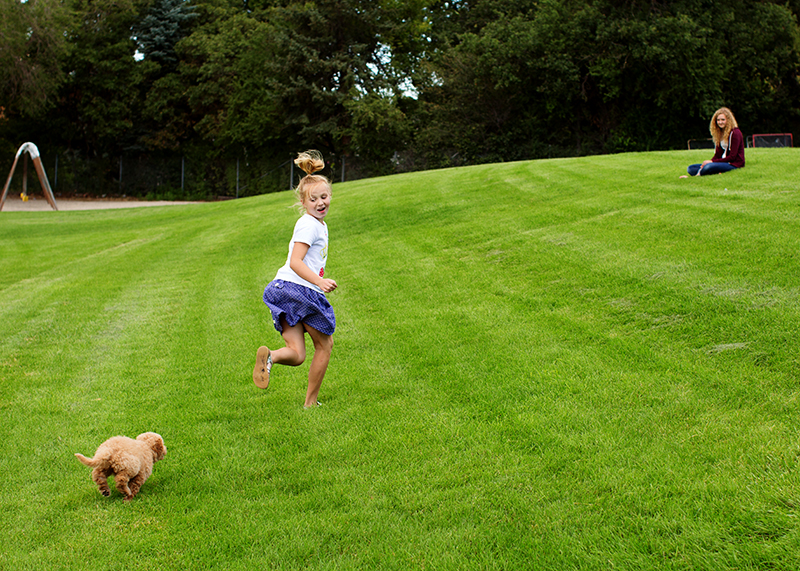 And when it comes to puppies, we are most definitely dummies. It’s all new to us and all pretty confusing. But Dean and Lisa assured us people even less intelligent than us owned dogs and even managed to train them well. 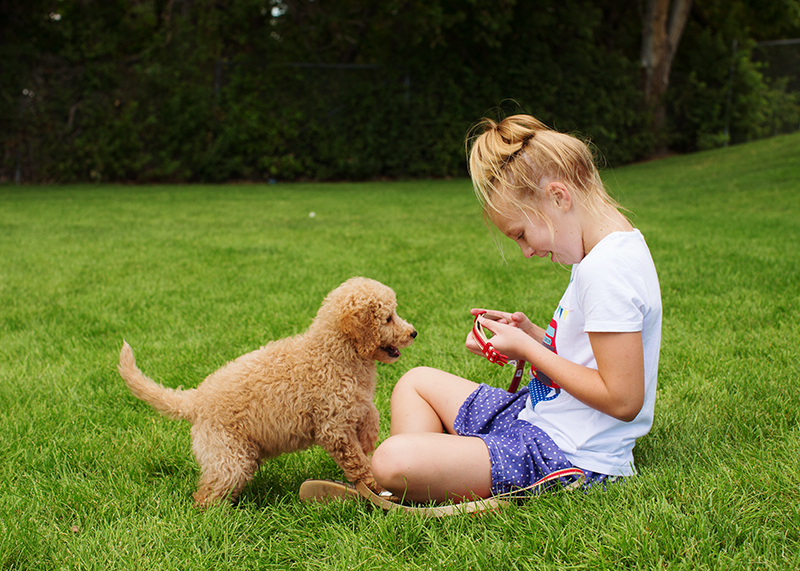 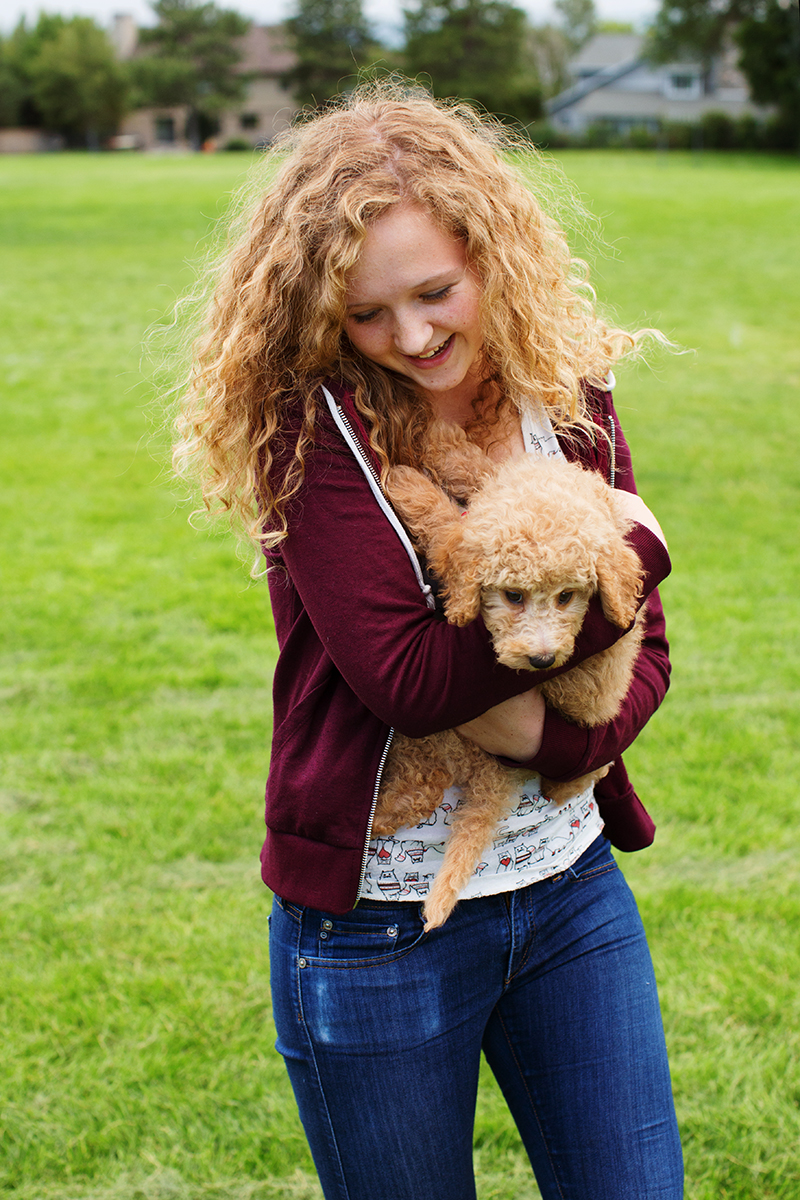 Golden Retriever + Poodle = Golden Doodle. Smart, quiet, full of personality, hair rather than fur– Doodles have become an extremely popular hybrid breed. Hypoallergenic, though we still had to increase our allergy dosages. 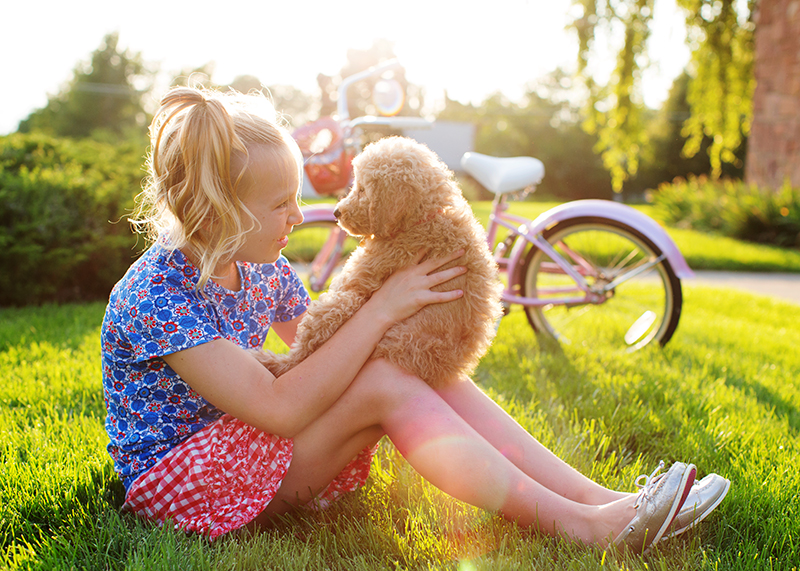 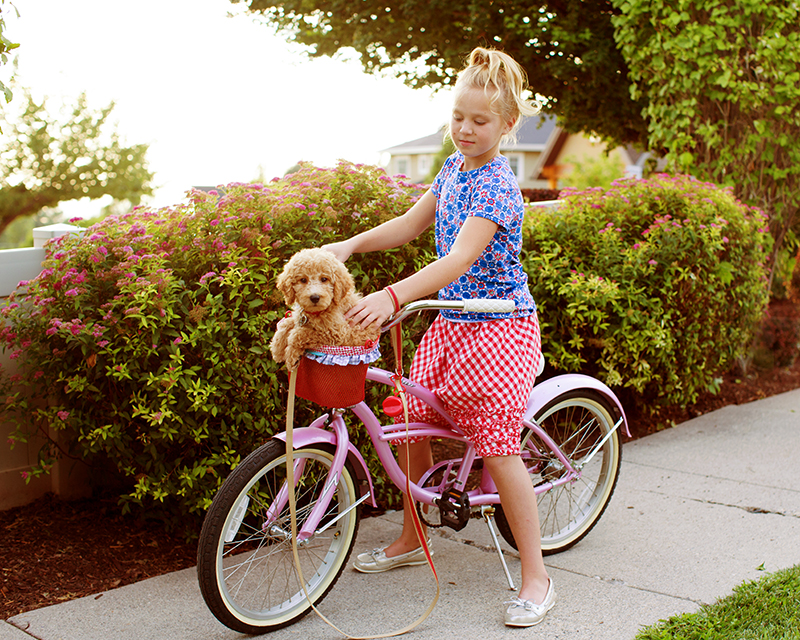 Now, the car story. Monday morning, Hans and Xander drove up to Idaho for AFY (Adventures for Youth). I’d planned on driving them, but realized Sunday night, “Hey, Hans can drive.” Erik was out of town for the week so they could take his car equipped with GPS. 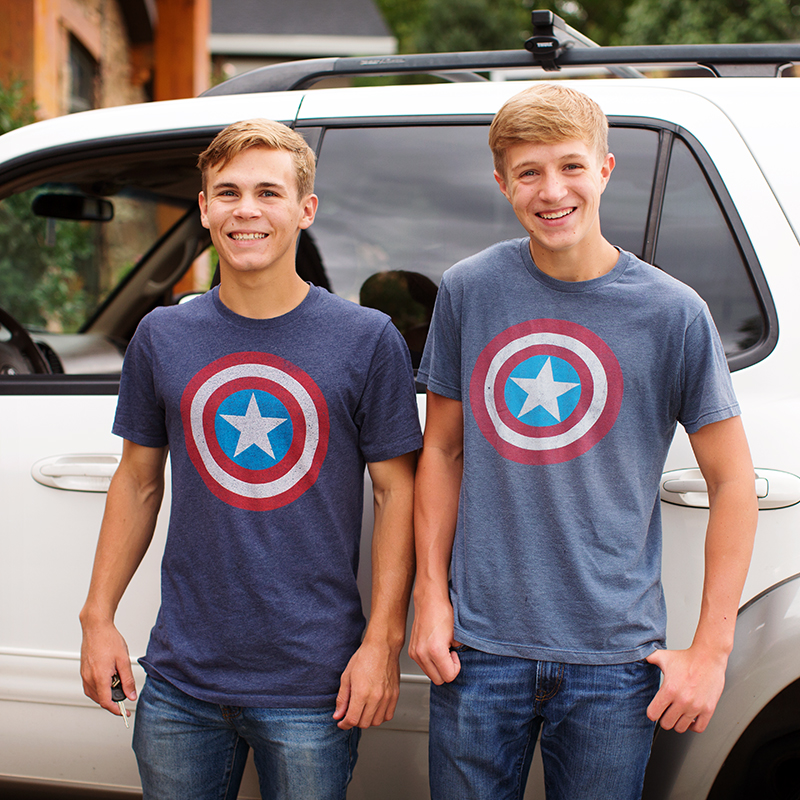 Aren’t they adorable? They even stopped in Idaho Falls to buy Xander a pair of pants at Old Navy.

They had WAY too much fun. River rafting, camping, horseback riding, ropes courses… and so many new friends. Xander was nicknamed Abs (which he did not appreciate) and Hans = Hansome. 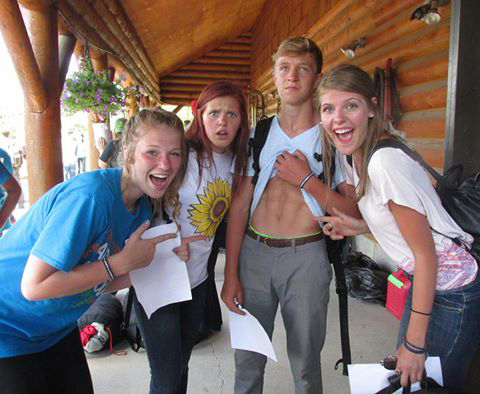 At the end of the week, they posed in some final photos, packed their bags and headed home. And they almost made it… 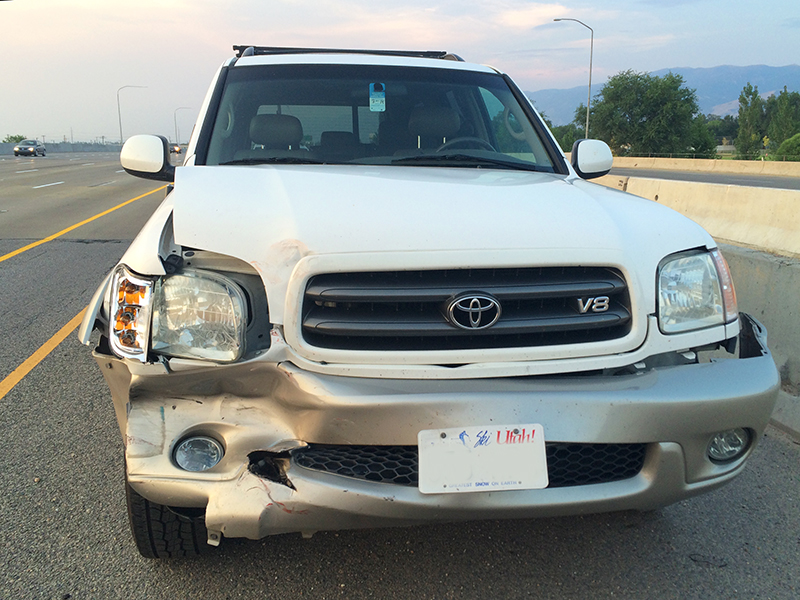 They were only 20 miles from home when an accident happened ahead of them and traffic stopped suddenly. Hans pushed the brakes to the floor, saw he was still going to hit and swerved to avoid full impact. Which turned out to be exactly the right thing to do.

When your son call and says, “I’ve been in a car crash,” then follows with, “but no one was hurt.” Everything in life zooms into focus– all minor concerns become petty and everyone breathes in the grace of “and no one was hurt.”

It took me about 30 minutes to reach them. I was so happy to see my beautiful boys, safe and whole, leaning against the freeway divider and I don’t know if I’ve ever been more proud of Hans when he hugged me, burst into tears and said, “It was my fault. I could’ve killed that baby.”

He didn’t come close to hurting anyone, but I believe there’s great value in admitting when you are wrong and feeling true remorse. Everyone reassured him, even the policeman, “Don’t beat yourself up, buddy.” “It could happen to anyone.” “You’re lucky to have this happen when you’re young. Just think what a cautious driver you’ll be for the rest of your life.”

And I’ve recommitted myself to staying away from my phone and focused while driving. Hans and Xander are zealous about ignoring the phone while driving but I haven’t been a great example. I’m going to be better. 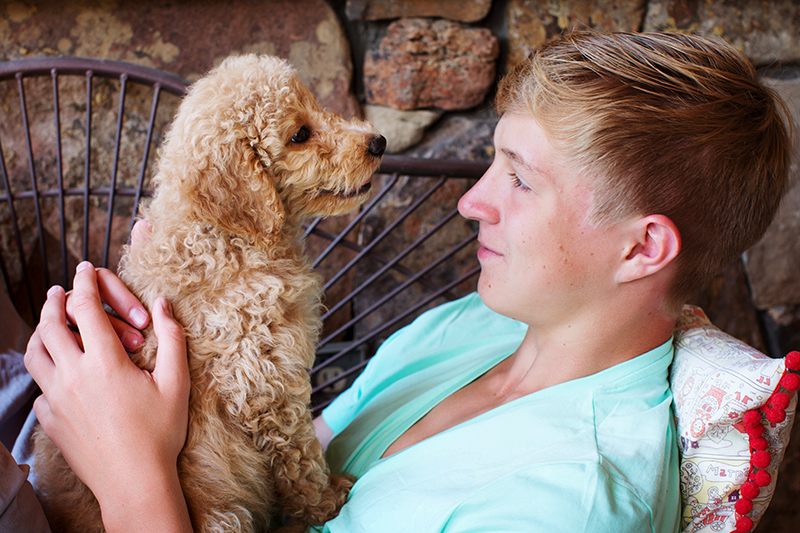 Back home the boys were greeted with the surprise of a new puppy. Xander’s first words to Molly, “Oh I love you!” 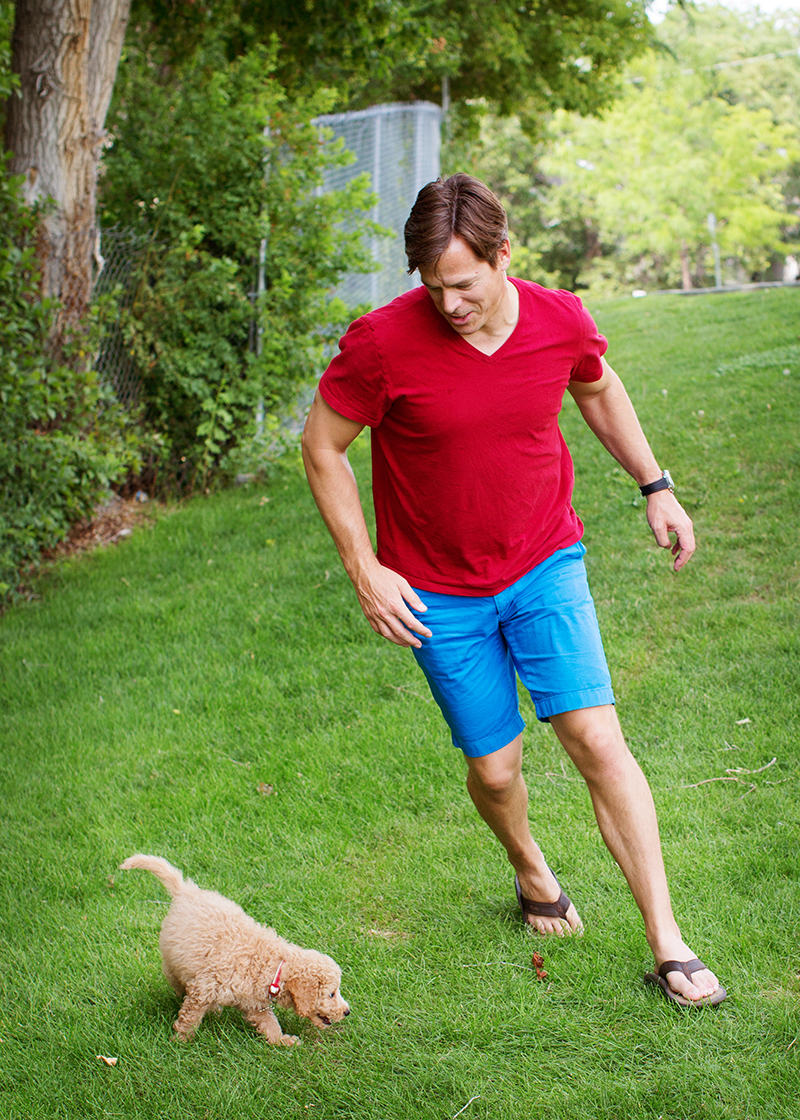 Hans couldn’t relax until Erik came home from his trip and said, “I’m not mad Hans. I’m just grateful you are OK. That’s why we have insurance. I’ve been driving that car for 11 years. Don’t worry about it. But I will let you fill out all the insurance paperwork.” 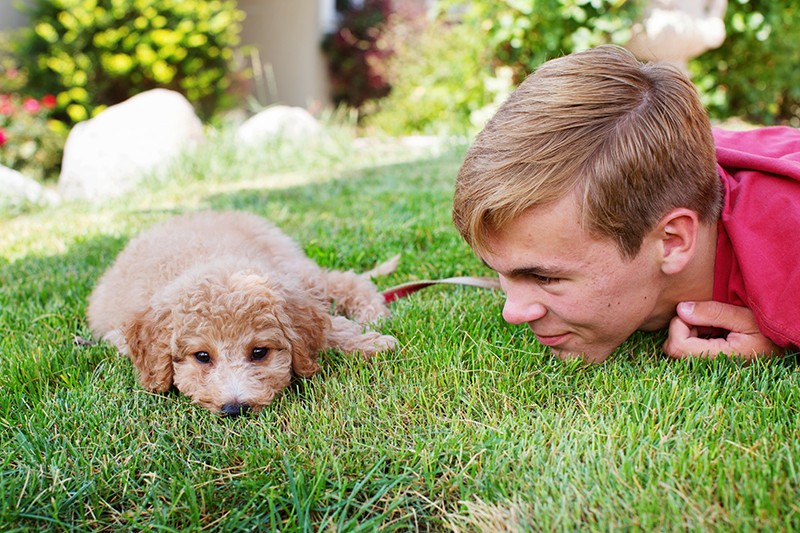 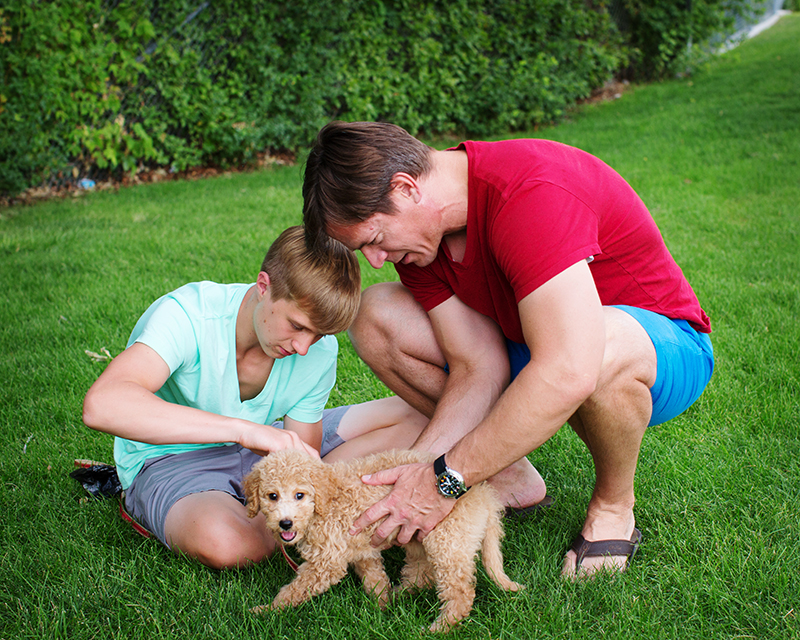 And then we got to work learning puppy language. 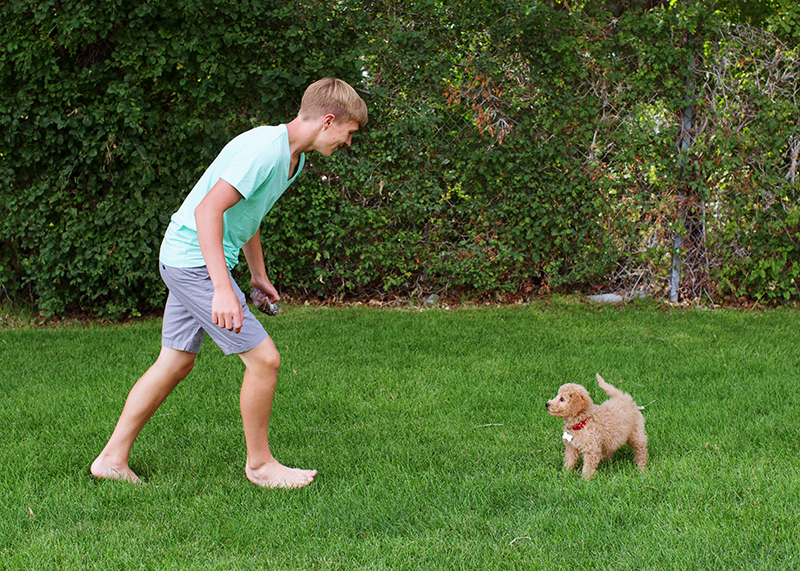 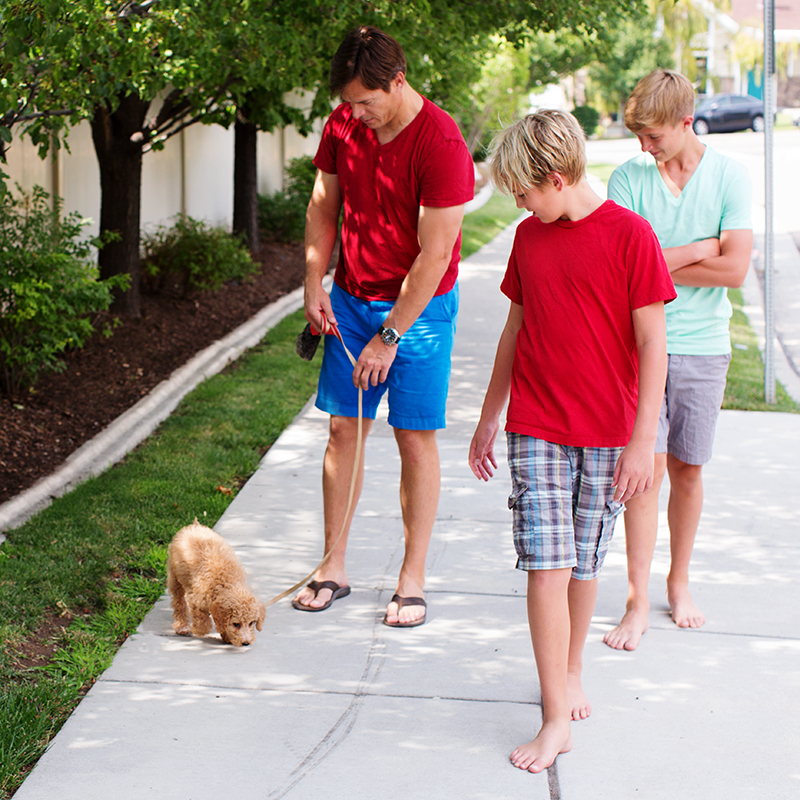 Three men and a puppy. 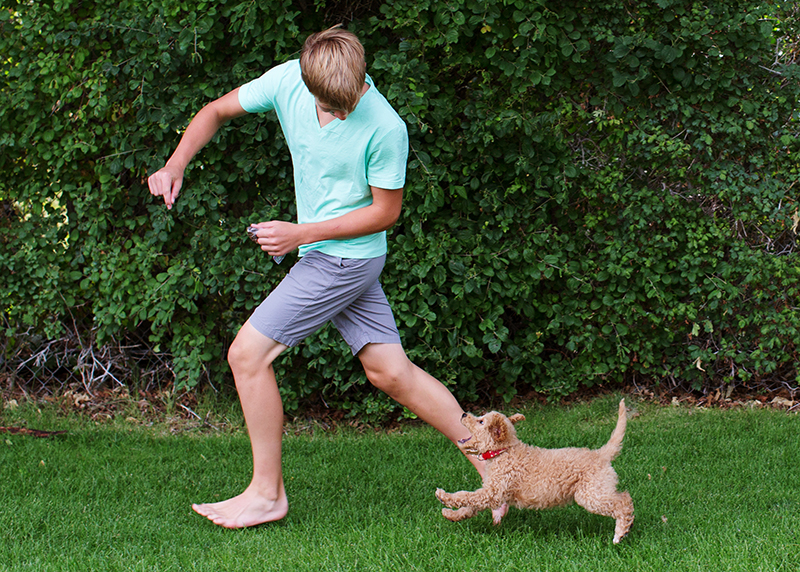 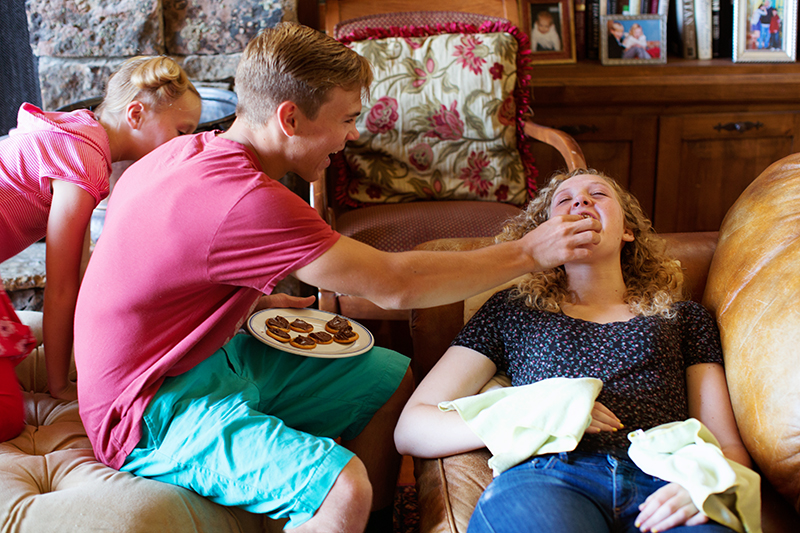 Lizzy didn’t feel like our week had been exciting enough so she fell and sprained both wrists while Mary was teaching her how to rollerblade. So she had to fed by Hans. I think we should all be amazed at Lizzy’s humility and good sportsmanship letting me use this decidedly unflattering photo. 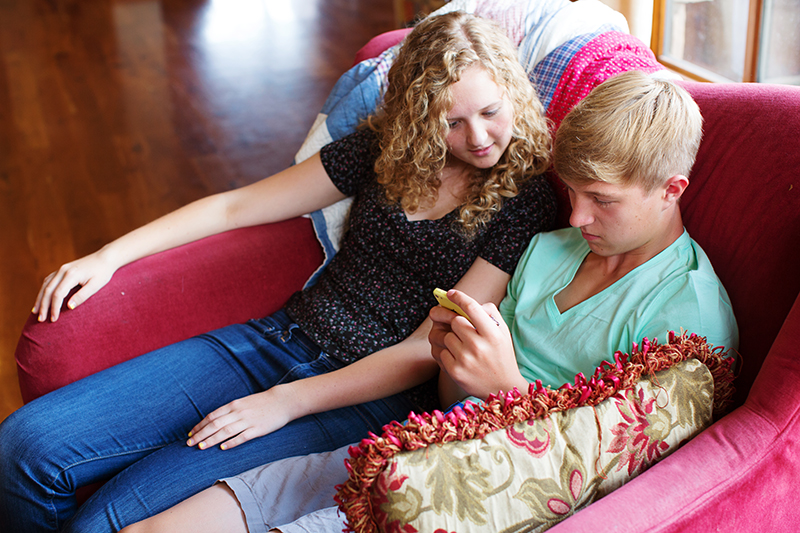 Xander unselfishly stepped in to help her check her phone messages. 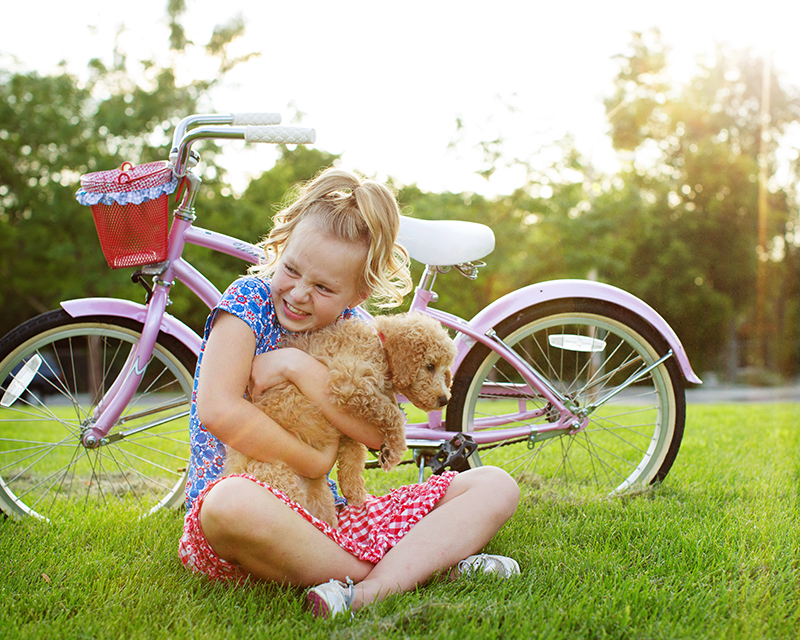 And on that somewhat sober note, I think we should just indulge in a few more puppy photos. 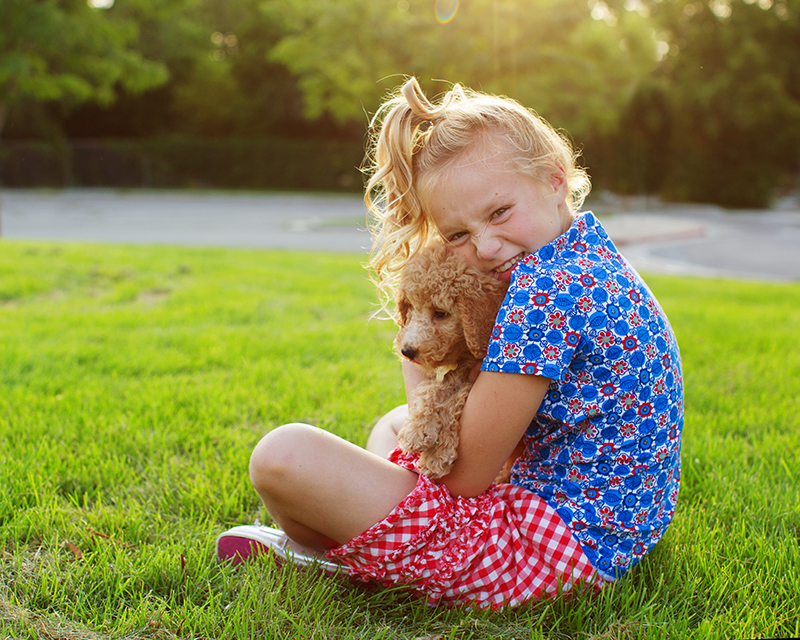 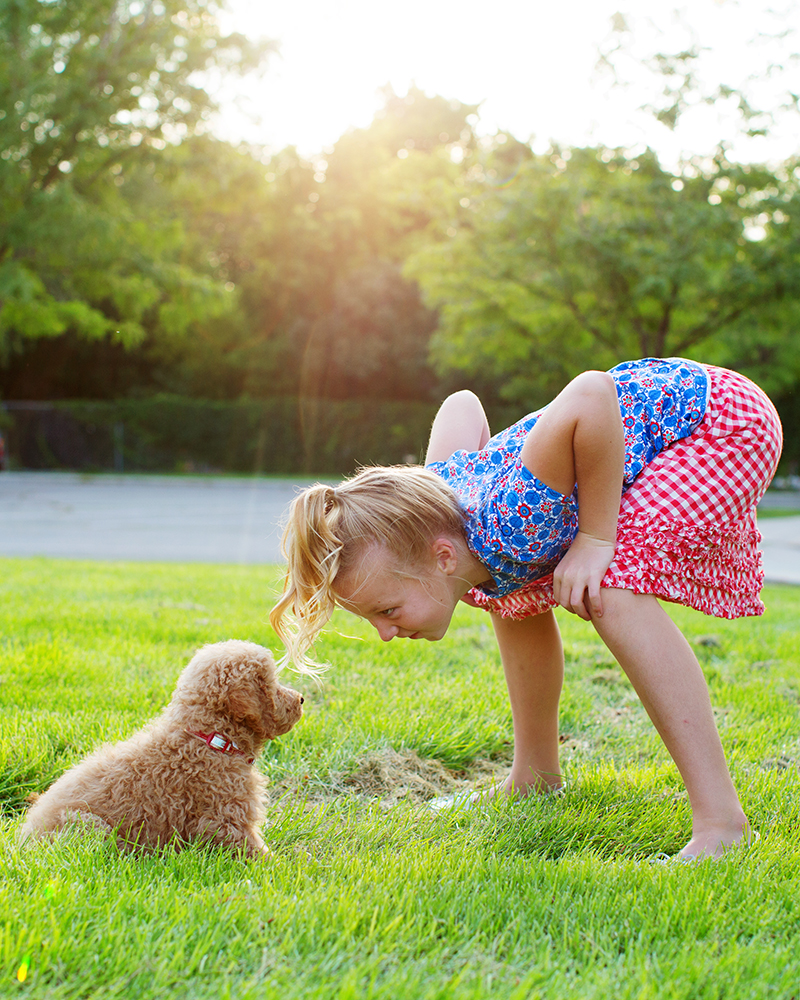 Let’s hope this week is slightly less eventful. Getting this puppy pottytrained would be thrill enough for me.

I love and miss you every day.

we are all known