Easter Egg Hunt in a box 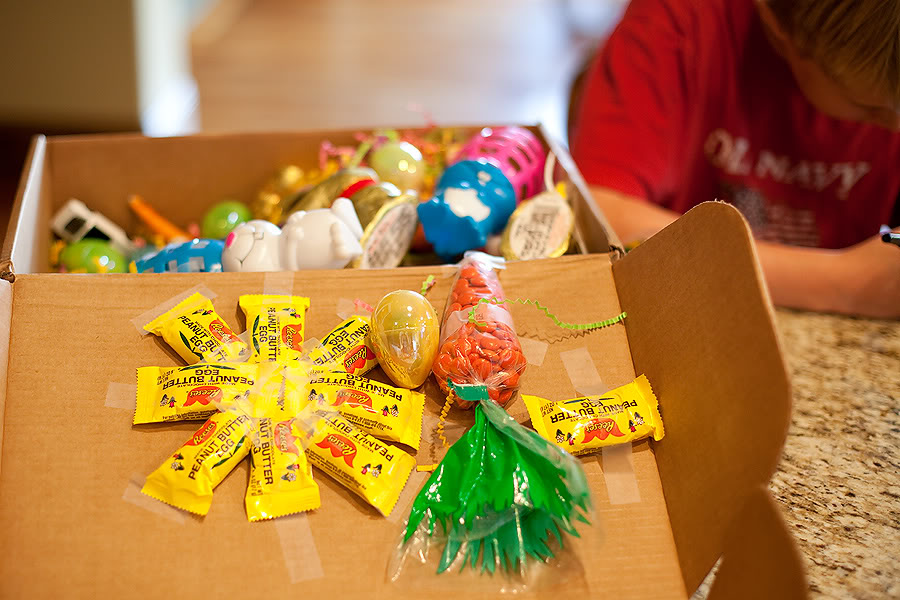 Perusing the Easter aisle at Smith’s, Xander, Mary and I broke into a happy dance–“Chocolate bunnies, sparkle eggs, Peeps!” At least one passerby chortled as he passed us, but we didn’t care; we were busily filling the cart with the trifecta of Easter candies– Cadbury Eggs, Starburst Jelly Beans and Reese’s Peanut Butter Eggs.

Well, maybe Xander did mention that I am “so immature” — whatever. 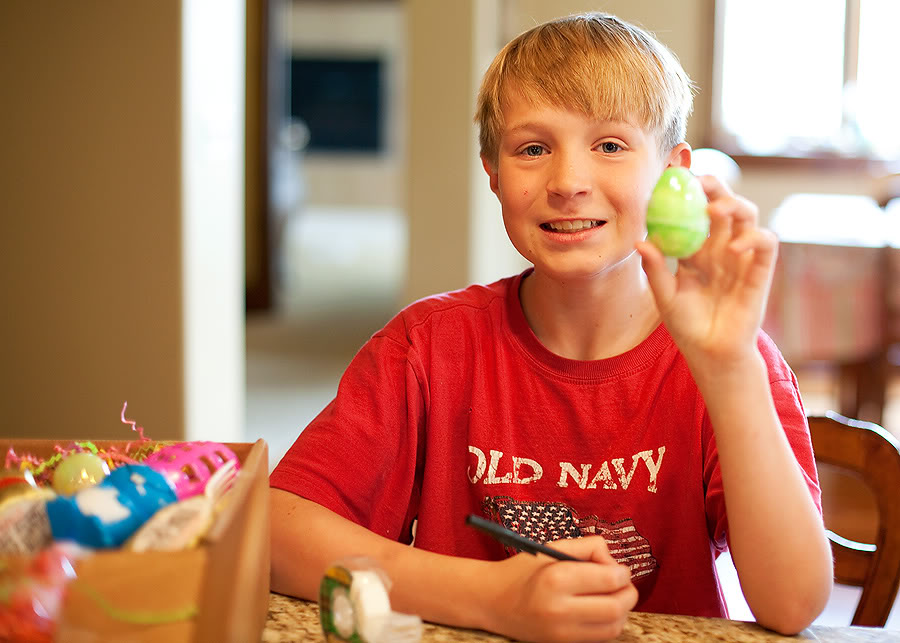 On my own, I couldn’t possibly create the perfect Easter box for Ben. I simply don’t think of things like filling an egg with a folded math worksheet or requiring that Ben use a fork to remove candy from the box. 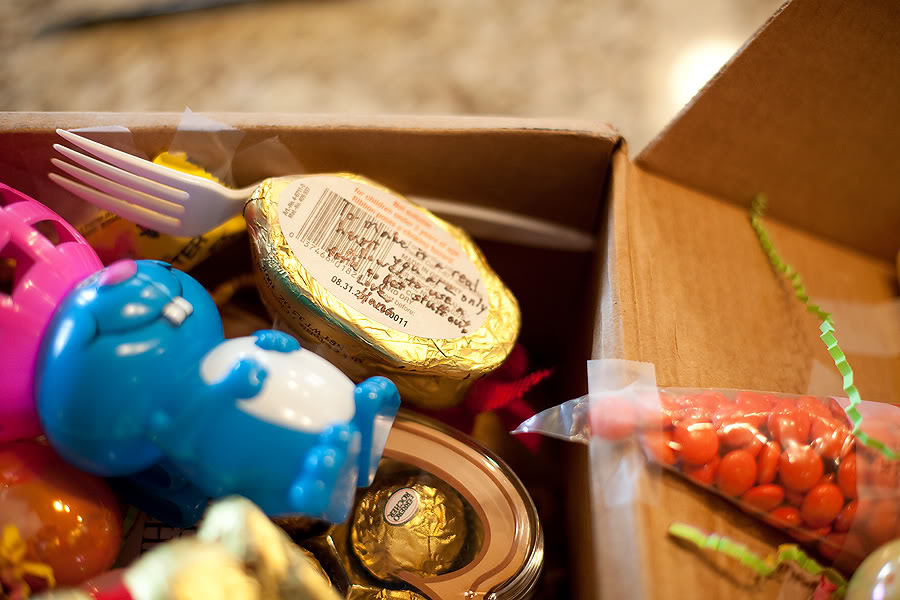 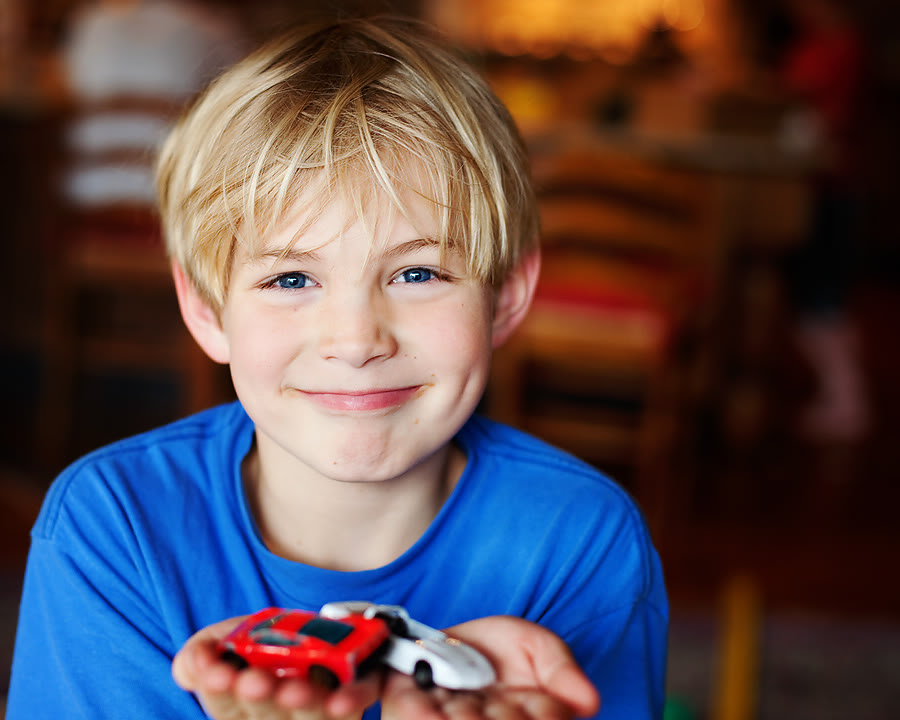 Always and forever, we play with Matchbox cars on Easter (I have no idea why); Gabe sacrificed two from his collection so that Ben could hold races with his companion. 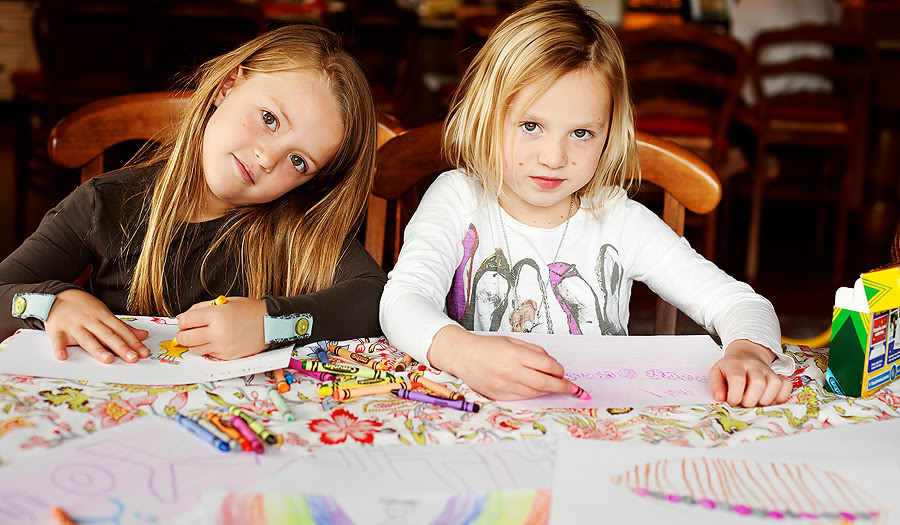 Two of the sweetest little artists I know produced a dozen works of chickie, bunny, rainbows, flowers, ‘I love you’ art. 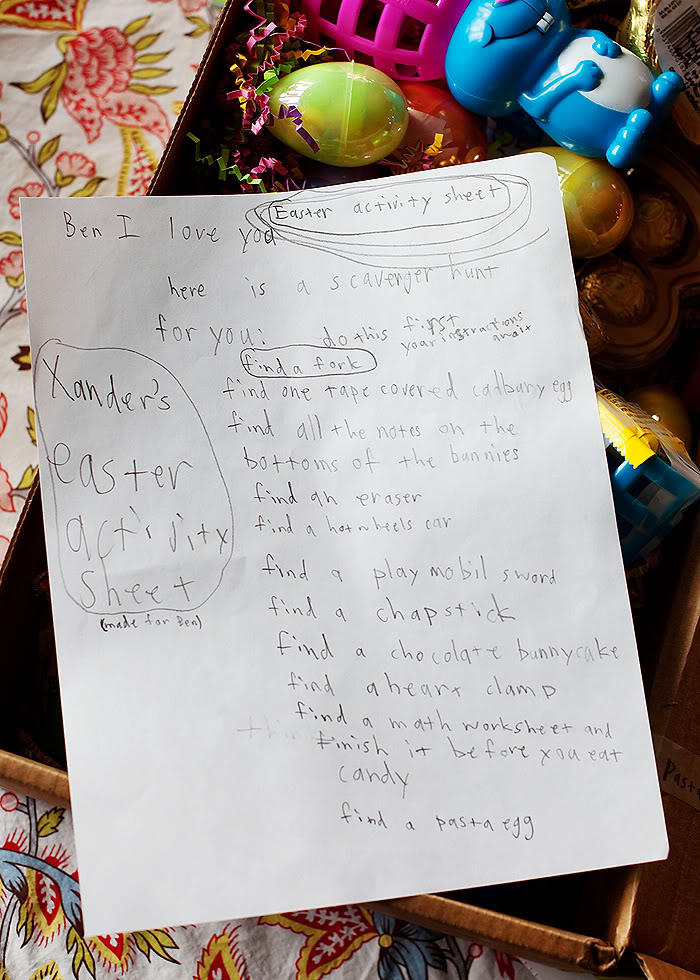 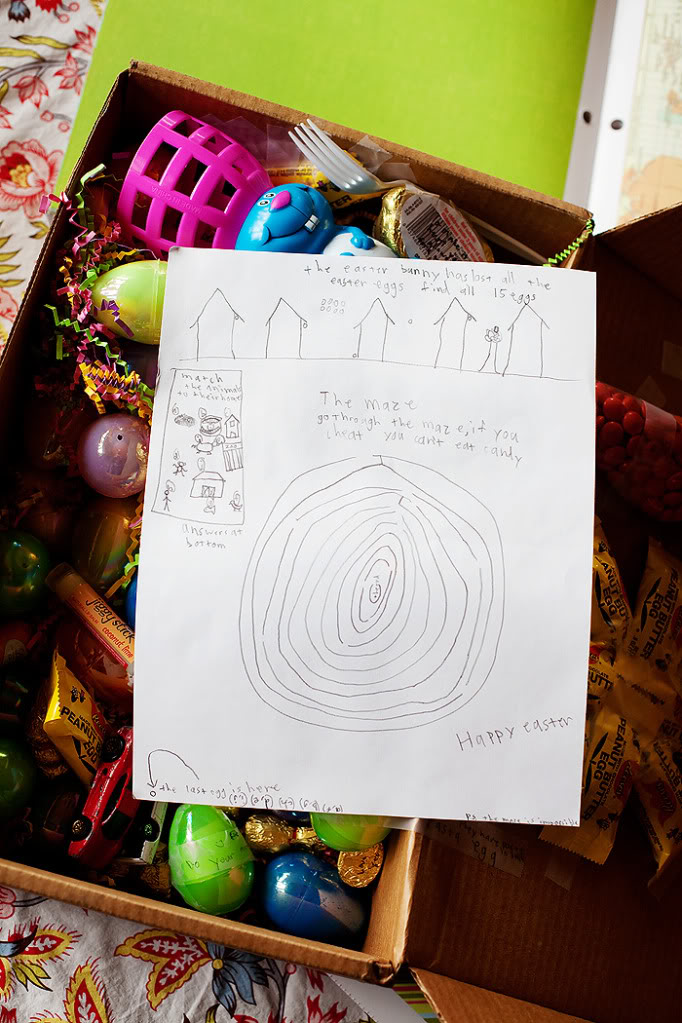 “go through the maze, if you cheat you can’t eat candy”

and at the bottom of the page:

“p.s. the maze is impossible.” 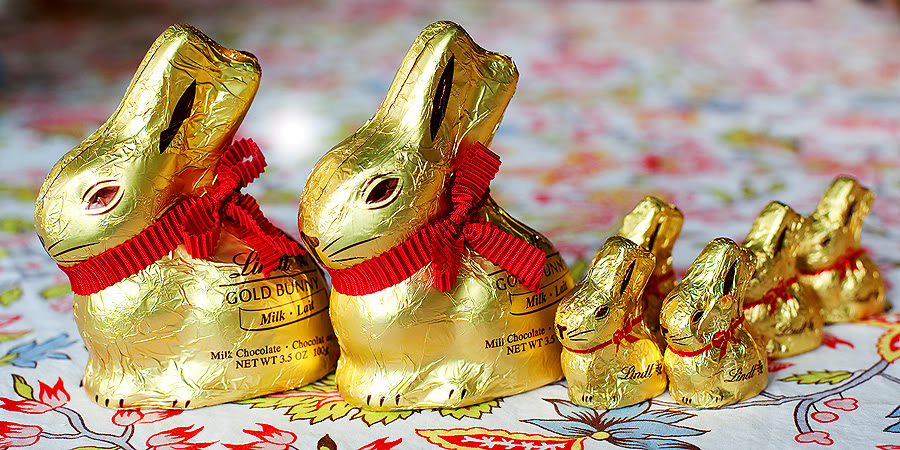 We only bought two bunnies at the store, but by the time we got home the bag was full of tiny baby bunnies (Hans thought this joke was wholly inappropriate for a missionary but I giggled about it anyway). 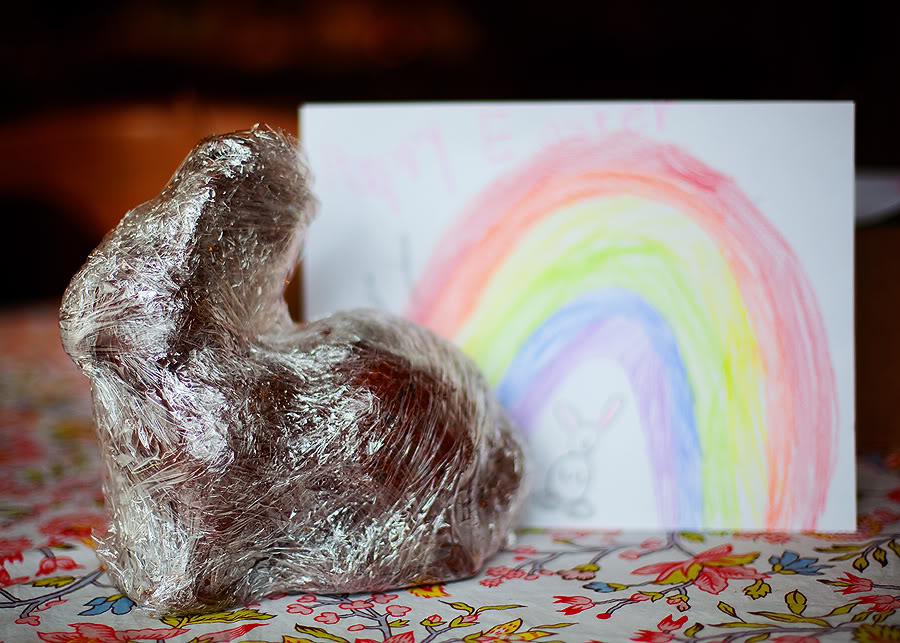 Our final addition was a chocolate chip, chocolate covered bunny cake. I make one every year (because we never have enough chocolate on Easter). It nearly didn’t make it into the package because the boys nearly convinced me that it wouldn’t survive the trip– we should just eat it. 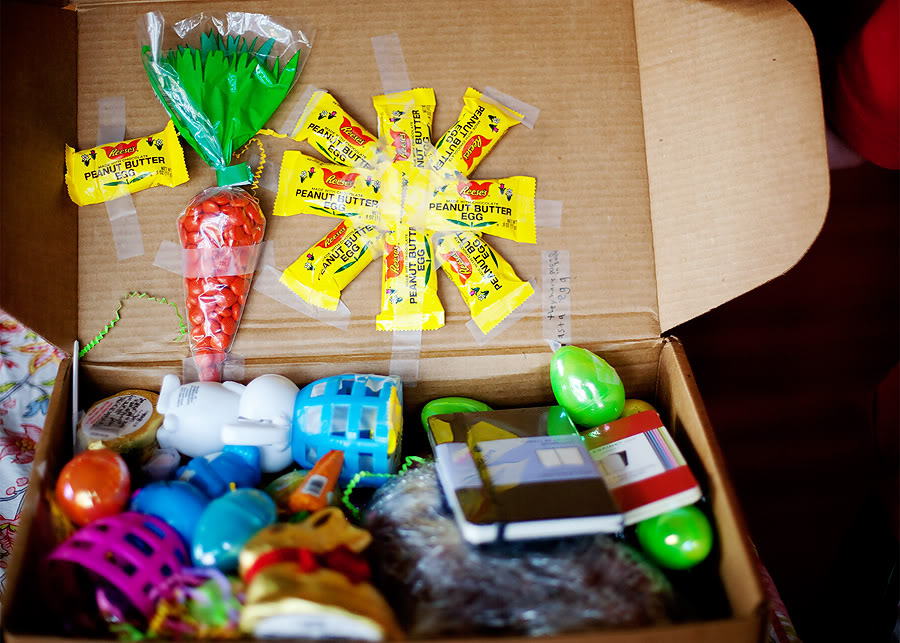 Nearly 10 lbs. We’ll have to go a bit lighter next year. 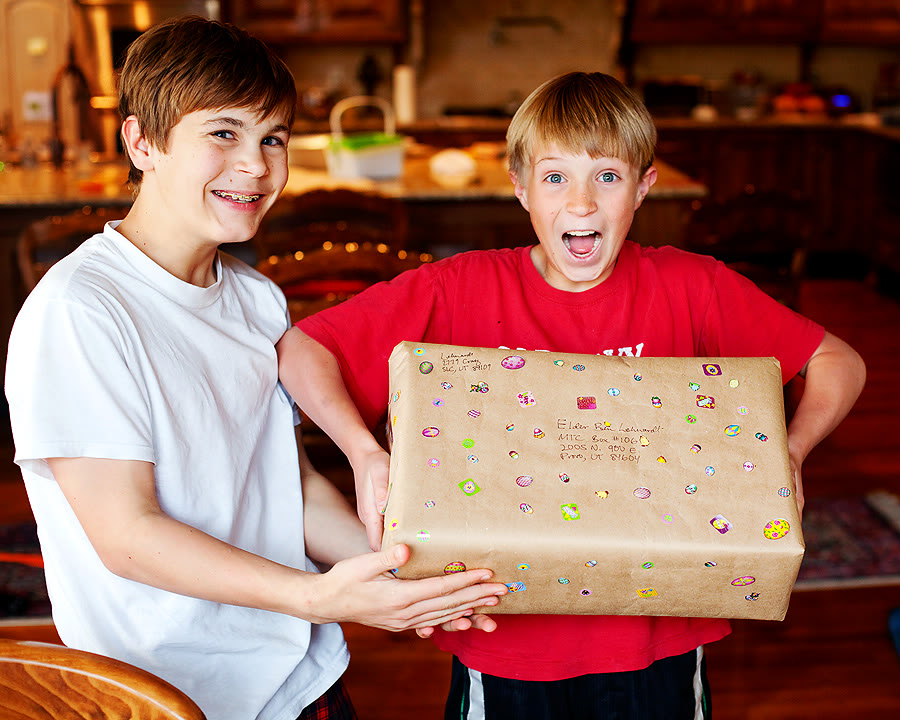 p.s. I just realized that all the grown up moms probably sent their missionary pictures of Christ and inspirational quotes. Poor Ben will have to deal with his immature mother.