It’s been a crazy busy day but I have to take a minute to write about my darling, beautiful, now-6-year-old boy.

I’ve never been shy here or elsewhere about my flat out adoration of Gabriel. I love that boy.

Erik and I were ABSOLUTELY NOT having more children after Xander(mostly because I am the worst, whiniest pregnant woman in the world). But we were convinced to have another(that’s a story for another day). We didn’t tell anyone about the pregnancy until we knew we were having a boy.

The announcement of a fifth son doesn’t generate much excitement in the community. In fact the most common sentiment I heard was,”So are you going to try again?”

But I was determined to greet this baby with every bit of love and excitement I’d had for the previous boys. I painted the crib, bought new bedding, tied quilts and blankets and bought beautiful new clothes (of course). My favorite preparation was painting the nursery and stenciling Wordsworth’s famous poem on the walls:

Our birth is but a sleep and a forgetting:
The Soul that rises with us, our life’s Star,
Hath had elsewhere its setting,
And cometh from afar:
Not in entire forgetfulness,
And not in utter nakedness,
But trailing clouds of glory do we come
From God, who is our home:
Heaven lies about us in our infancy!

My doctor was persuaded to induce labor two weeks early because we were all in a panic about the Olympics. Remember that post 9/11 panic? We all feared that the Olympics might be the target of a terrorist attack or at best simply shut down access to the hospital. I was pregnant with all the 9/11 widows and I remember crying for them almost daily.

Gabriel’s birth day was incredibly joyful. I truly believe there were angels in the room that day.

I remember Gabriel’s 2 month check-up where he was giggling and laughing. “The fifth child is a smile baby,” Dr. Bentley told me, “he has to be!”

And that’s what Gabriel has been– he is my smile baby. He is my joy.

We celebrated Gabriel’s birthday all day. He stood by the front door when everyone was arriving for Scripture Group and said, “Don’t you want to wish me happy birthday?” He took an “All About Me” poster to school and chocolate chip granola bars to share with everyone. He helped me make a sloppy but very yummy chocolate mint cake and delighted in telling his brothers which of his new toys they could and could not play with.

Because it was a wild evening with kids going to and fro to scouts, basketball, play practice and tennis we didn’t plan to have anyone over. As we were icing the cake Gabriel asked when gandpa and grandma were coming over. “Not tonight.” I told him. “We’ll have them over Sunday and celebrate yours and Mary’s birthday together.”

His big blue eyes filled with tears. “But it’s not a birthday if your grandpa and grandma don’t come!”

I got right on the phone and happily, thankfully Grandpa Fritz and Grandma Maria rushed on over. It was a real birthday indeed. 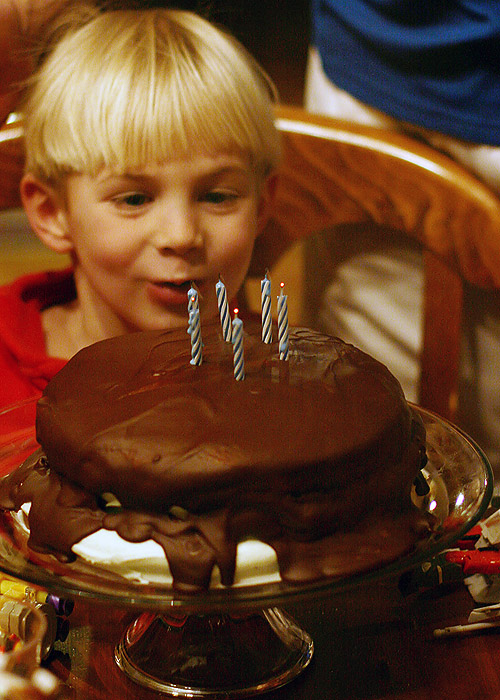