Last night Gabriel and Mary slept in my bed. Unlike last time that Erik was out of town they were drowsy and snuggly and simply wanted to cuddle in and hear stories. They have an endless fascination of “when mommy was a little girl” stories. I told them about the round swings and playing in the creek and my kitty, Babyskins.

I remember listening to stories of my parent’s childhood when I was a little girl I thought my parents were ancient and their world in the 40s and 50s seemed so long ago. I also remember thinking– “It won’t be this way when I tell my kids about my childhood because the world won’t change that much.” HA! My childhood in the 70s is much more similar to my parents’ childhoods than the world we now live in– microwaves, VCRs, personal computers, the internet, recycling, ipods, medical advances, bicycle helmets, car seats etc.– none of these existed when I was a little girl.

I wanted to be an inventor as a child and was constantly making little cars and boats and gadgets. I remember one of my friends oh-so-wisely telling me that there was no point in being an inventor because everything had already been invented. HA! I can’t imagine anyone saying that now. Our world is certainly full of more fear but we also believe in limitless possibilities.

Back to the snugglers, I have to sleep between Gabriel and Mary to avoid fights. I push them a bit away to give us all breathing room but no matter which way I twist or turn they melt back into me like liquid gold. They completely mold themselves to my body. Thankfully, I can sleep through almost anything so I slept pretty soundly. But when my alarm clock went off at 5:30 to go running I was literally drenched in sweat. I pried the little sleepers off me and threw on a t-shirt and shorts to go running. It was 28 degrees. My friends all thought I was nuts!

Hans and Xander had parent teacher conferences today. They were excited about them all afternoon and kept asking, “How much longer?”

“After allergy shots, after Xander’s lesson, after I drive Stefan to orchestra…” Aren’t kids supposed to dread these conferences?

Not Hans and Xander. Their teachers adore them. Hans was first and told Xander, “You can sit and listen while my teacher tells mom all the terrible things about me.”

Mrs. Lambert laughed and then it was just a big ole lovefest. He’s so smart, he’s so funny, all the kids like him. I love to watch him play at recess because he’s such a little guy and right in the middle of everything.

It was the same in Xander’s conference– he’s wonderful, he’s perfect, he’s such a good friend, such an incredible reader. I said to his teacher, “Well, I tell him to stop reading and to go watch TV like a normal kid but he never listens.” She looked horrified for just a moment, then started to laugh. I watched my two little boys sitting at the table with their too-long hair swinging, their eyes sparkling and laughing out loud at each other’s jokes and knew that life doesn’t get any better than this.

This blog has been a bit of a bragfest this week and I apologize for that. But more than anything I write this for my boys(and Mary) so that they can read it in future years and see how life really was. It’s been a joy-filled week and I have to embrace those when they come. 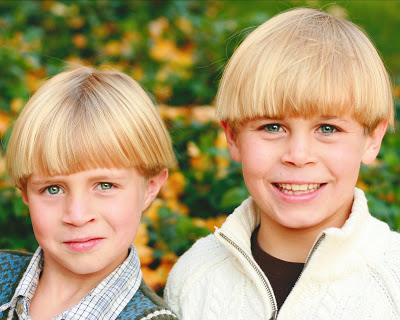 So what do you want for your birthday?