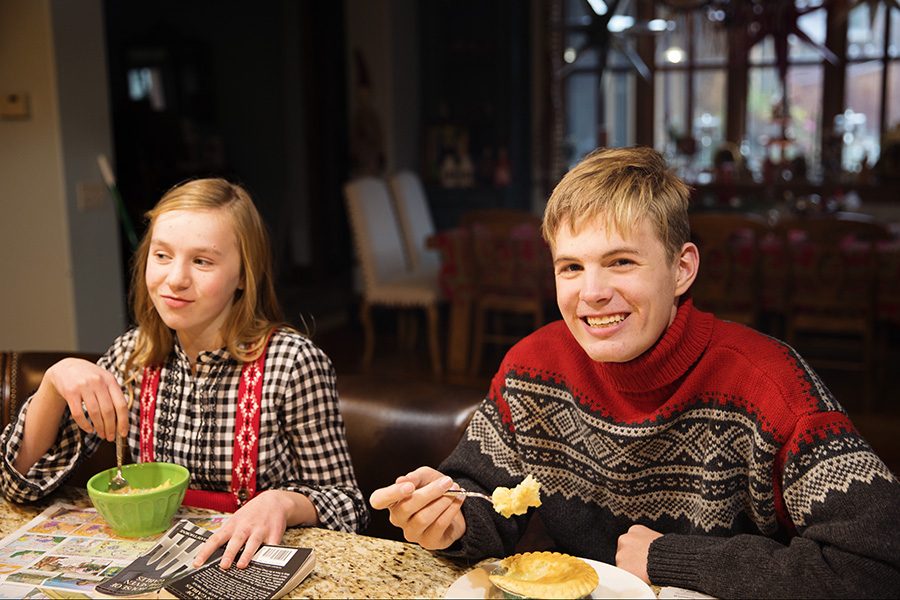 I’ve always avoided using the word ‘only’ when referring to the number of children in a family (I do slip up at times and I’m so sorry). Only one child, only two kids, only three…. it sounds so minimizing. When you have a child, whether it be one or twelve, you’re a parent. And that changes everything.

Ever since Xander left on his mission and Hans left for college, people have been asking me, “So what’s it like with only two kids?”

Here’s what I’ve learned: some things are very, very different– like the amount of food we buy or having enough seats in the car– but other things are much the same. Parenting is a bottomless well of need. A engaged parent investing in strong relationships will always have plenty to do. I used to be really annoyed by the phrase ‘numbers don’t matter.’ When you’re buckling kids into carseats, buying two grocery carts of food (not to mention booking airline tickets) numbers matter a LOT, but I now understand the spirit of that phrase. We can choose to be involved/checked out parents of one kid or eight. It’s similar to working from home or at an office– you can be home and really not be there, just as you can be away and still connect with kids.

Still, it’s been interesting to reflect on parenting six kids at home vs. two.

The other day I went to one of Gabe’s Troubadour (barbershop group) Christmas performances. They trek around to several elementary schools and rest homes spreading holiday cheer. I sat by some of the other mothers, clapped after each number and marveled at their abilities. While I was humming along to “Silent Night” I realized I hadn’t attended a single one of these concerts when Stefan and Hans were in Troubadours. Sure, I went to the high school concert, but for all these others, they were on their own.

Ben and Mary often trade notes on the differences in their childhood. When Ben was in 8th grade he babysat five younger siblings and changed diapers on a daily basis. He was often embarrassed to bring friends over because his younger siblings climbed all over them, begged to wrestle and interrupted every conversation. Now we purposely nurture friendships with younger families just to get babies in the house.

For the first few months after Hans and Xander left, it was hard to see any differences. I still have six kids and they run in and out of the house regularly, but as we’ve settled into some sort of routine here’s what I’ve noticed:

OK, I’m going to stop there. I had five more items on my list but it started feeling self-congratulatory and possibly offensive. While I am thrilled to be a little more pulled together (finally!), I’m also mourning my children growing up. It makes me feel better to say, “We’re still really busy!” “We’re nowhere near empty-nesters!” I still wish we’d had one more baby, but I’m slowly getting over that loss. Here’s the truth– I never planned to be a mother. I never thought I’d love it so much and be so good at it. Oh I know, it’s taboo to say you’re good at mothering, but I am. And I’m afraid I’ll never be good at anything else.

So let’s leave it here. Two kids. It’s a lot. They need rides and food, a place for their friends, help with homework, jokes and conversation and so many hugs.

And I plan to enjoy every day.