I think I’ll always remember the day I had to stop running.

It was six days after Stefan left on his mission, on an early morning run with my friends, when from one step to the next, my leg buckled underneath me. Dragging myself to a lawn on the side of the road, I lay on my back staring at the stars. My friends had to keep running down the road– they had kids to wake up, lunches to prepare, carpools to drive… Somehow I got home. I don’t remember if the pain subsided enough for me to limp or if Erik picked me up, but I didn’t run again for two years.

Maybe it’s hard to explain the joy of running to those who don’t love it? For me, running was the first physical activity where I excelled. I’m hopeless with any kind of dance or games involving balls and/or eye-hand coordination. I’m a good skier (snow and water) and gutsy (cliff jumping and such) but those aren’t everyday activities.

I fell in love with running at 18 when my sister ran the mile and a half in her eighth grade gym class. She had such a fast time, the P.E. teachers looked at her non-athletic build and accused her of cheating. So, she ran it again and broke the school record. Soon, they had her working out with the high school team and she recruited me to run with her over the summer. I’d just graduated from high school and had no interest in an activity I associated with P.E. class. I told her, “I’ll go on a walk with you.”

My darling 14 year old sister responded, “Walking is for elephants. We’re gazelles.” And so we ran and ran and ran. And I fell in love with my sister. The running was secondary.

We almost missed each other. I almost went off to college without ever getting to know Ruth. And that scares me. I owe running many debts. 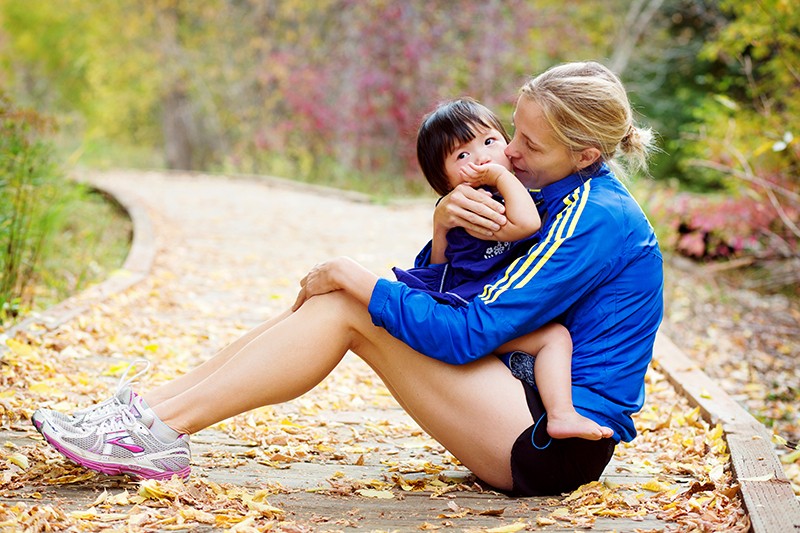 Shelah and her fifth baby– Rose

Even then, we didn’t look like gazelles– but we were fast. My sister and I have genetic code that really, really wants us to reach 300 lbs. And we’ve always been running from that. Fear gets me out of bed in the morning: walking when I can’t run, rowing when I can’t walk, weight training and Whole30 eating and I still get lectures from my doctor about my BMI.

I missed running. I missed my friends. My neighborhood hosts several different walking groups which I joined and still love, but walking just doesn’t produce the legs-burning-lungs-heaving-soaking-wet-ponytail-runners-high. There’s also a raw honesty among runners. When you’re sweaty and running in the dark, dealing with runny noses and angry digestive systems you leave all pretensions behind. When people talk about exercise as therapy, it’s no joke. I’ve met a few walking friends who equal that honesty, but only a very few.

One day, Shelah, one of my long-time running partners texted me saying, “I miss you. Let’s find a time to walk.”

That sounds pretty simple. But I think I may have shed tears when she sent that text. Shelah’s the busiest person I know: a top-notch runner, mother of six, teacher, writer, editor, Primary President, etc. I couldn’t believe she’d slow down for me.

So we walked. We set a time, met twice a week and Shelah slowed herself to my pace. Sometimes with her two youngest in the jogging stroller, often with her dog. Shelah never made me feel lame or slow or embarrassed. Before Shelah met me to walk, she’d already run 6-14 miles each day. Not kidding. More on that in a bit.

Although I’d been told my back was so bad I should never run again, another doctor (the one who worries about my BMI) told me I’d healed enough to get back out there, “Just a couple miles at first, only every other day…”

So we started running part of our route. A mile the first time, two the next week, then back to zero. Shelah never complained, always saying, “I’m just happy to be out here with you.”

And I don’t know why. Poor Shelah hears all my complaints, my whining, she knows every detail of every family drama and still she puts up with me.

After a few months we were running the entire 6 mile route with only occasional walking breaks on the hills. One day, the walking breaks just disappeared. Shelah single-handedly rehabilitated me back into a runner.

OK, it’s time to stop and just talk about Shelah for a minute. She’s probably the most high-functioning person I’ve ever met. It’s like hanging out with Jefferson (or, I prefer Hamilton). I’ve mentioned she’s a mother of six, she teaches at both BYU Salt Lake Center and LDS Business College, she reads six books a week, she makes the most amazing (and delicious) birthday cakes you can imagine, keeps a spotless house, serves as Co-Editor at Segullah, edits books, writes novels, gets her Christmas shopping done a month early, plans really cool trips with her family and cares for her husband and children with beauty, grace and a healthy serving of fun. And have I mentioned she’s a blazing fast runner who enters several marathons a year?

You might think a friend like Shelah would be intimidating, but she’s so genuine and kind I can’t help but feel complete admiration for her. She just functions on a much higher level than most of us.

In July, Shelah accepted a job teaching French at our junior high. As we discussed her schedule (and honestly, I don’t know anyone else who could handle her pace) we searched for a time to meet for running.

But Shelah. She runs a mile and a half to my house to meet at 5:20. And runs home after we’ve clocked our six miles together. Superhuman. I tell you.

Then she goes off to the junior high and teaches French to both Gabe and Mary. As you can imagine, they LOVE her and she’s already become a favorite teacher at Wasatch Jr.

Also in July, our beloved friend Suzanne was diagnosed with breast cancer. Because her double-mastectomy needed to take place before the marathon she and Shelah had planned to do in late September, they entered a different race two days before Suzanne’s surgery. Suzanne’s also a blazing fast runner, but the stress of her diagnosis slowed her down the day of the race. I talked to Suzanne later that day and she was almost in tears when she explained, “I told Shelah to just go ahead- she needs a Boston qualifying time– but she wouldn’t. She stuck with me on the hills and bathroom stops and when I had to walk for a bit. She just kept saying, ‘I’m not going to leave you. This race isn’t about the time.'”

I could cite a hundred examples of Shelah slowing down to lift someone up, but I wonder who lifts her? I’ve been thinking a lot lately about the way women sometimes judge each other, especially in the context of working moms. I think sometimes we see people like Shelah and feel so inferior we want to think they are neglecting their children or their religion or not baking birthday cakes or some silly thing. Let’s just acknowledge we all have different capabilities. After a crazy week I crave an entire day in my pajamas, but I can’t judge what anyone else needs.

This Monday I was running with a group of friends (struggling on the hills) when I felt my foot go “pop.” Again, I had to collapse onto the grass but was able to limp along until Catherine came back with her car and drove me home. I sobbed all the way home (and half the day); I just couldn’t face another two-year running hiatus. But it’s just a plantar fasciitis tear; I got a nice steroid injection in my foot, some stretches and I’ll be fine in 4-6 weeks.

With Shelah’s work schedule, I didn’t think she’d want to meet at 5:20 a.m. to walk. She has places to be, children to feed, she can’t slow down for me on a weekday morning (well, she always slows down for me, but you know, even more). But of course, Shelah said “I’ll walk with you.” and of course, she showed up at my house at 5:17 with several miles already under her feet.

Did I say waking up at 5:01 is difficult? I lied. Every week I look forward to setting my clock to that ridiculous time, tying on my running shoes and walking down to the corner to find Shelah. I can usually spot her just coming around the curve, blond pony-tail swinging, those amazing legs, her swift steady pace, head phones in her ears, and when she comes within a few yards, slowing to meet me at my own pace.