Last night, I ran out of gas on the freeway.

I haven’t pulled that particular stunt in Mary’s lifetime, but I deserve to stall quite often since I have a penchant for noting the empty gas gauge and then driving around for three more days. Usually I roll into a gas station just as the engine is processing the last fumes and I fill ‘er to the rim.

So as the car jolted slowly to a stop, I clicked on the hazard lights and finished my conversation with Emily (should I not be admitting to talking on the phone while I drive? It’s a bad, bad, bad idea. Let’s hope my dad isn’t reading this.) Night had fallen. Mary climbed out of her carseat and into my lap while the vibration from passing cars rattled our windows and doors.

It’s been a toilet clogged, computer broken, Erik traveling (um, 7 weeks in a row now), sleep-deprived sort of week and when Mary started to cry I was tempted to join her. Instead, I called Ben and pled for help.

13 minutes later his headlights shone in my rear view mirror, “Just stay in the car, mom. I’ve got it.” No complaints, no teasing–well, maybe a little teasing, “Be sure to go to the gas station, Mom. These two gallons won’t last a week.”

I drove home and reminisced about a night when he was 4 years old and had been screaming for the majority of the last 4 years. As I drove up and down the dark neighborhood streets I thought, “What if I just left him on a doorstep? Surely one of these nice people could raise him better than I?”

And today we sit in front of the computer as he fills out college applications– Brigham Young University, Utah State, University of Utah, Harvard (just for fun). Between reading his essays I’ve pulled out the shoe polish for my dusty boots and he scoffs at my efforts. “Here mom. Just stand still and I’ll show you the right way.” Two coats of brown polish, rub with a cloth, buff with a soft brush.

Is he trying to make sure I’ll miss him next year? Because I will.

Ben disapproves of posed pictures, “You have to capture the moment mom.” So I didn’t have one if him with the gas can or polishing my boots, but I did find this one from last month where he patched my flat tire. Ben fixes everyone’s tires–even neighbor kids– none of the rest of us even bother.

“You know, Ben,” I told him that day, “when you were a little kid I used to patch my own tires.” 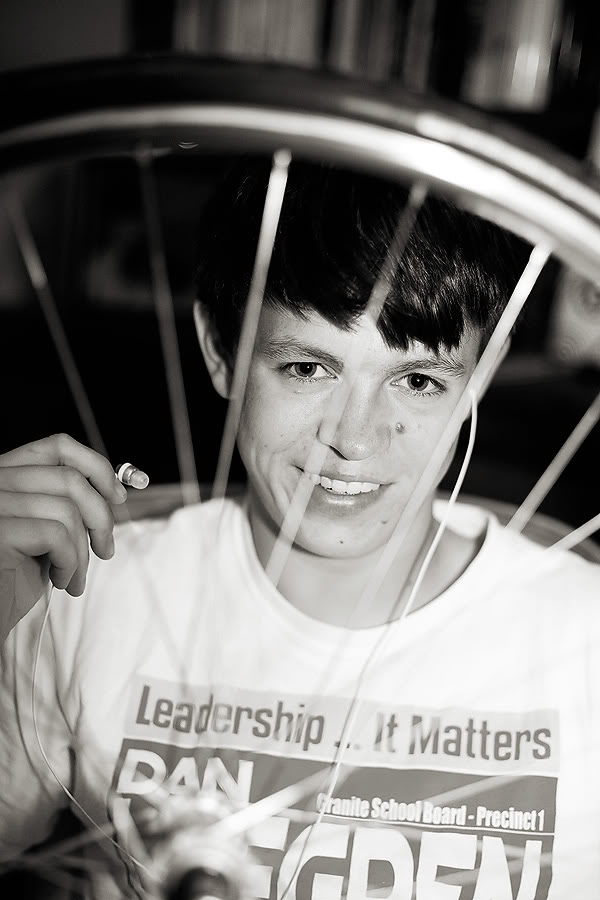 Halloween– it takes a village