The Agony and the Ecstasy

So…. obviously we decided we needed the kitty. After all, we are seasoned pet owners after keeping these little feeder fish alive since DECEMBER 15TH! They were our white elephant party prize and we honestly didn’t expect them to live the weekend

But since I am turning my business over to new owners on Saturday(more on that another day) and am working like crazycakes on the transition I told the kids we needed to wait until Monday to bring kitty home. Still, I did pick up supplies for her last night while waiting for a prescription because I’m a “makes good use of time” sort of gal.

As you can imagine, the kitty food, litter box and soft bed caused a ripple of excitement at home that quickly became a tidal wave of preparations. While I pecked away at the computer, Stefan supervised the four little ones in clearing a corner of the garage, sweeping, mopping and setting up kitty paradise.

Completely pleased with their efforts Mary and Gabe settled themselves on the kitty bed and announced that they were waiting there until kitty came home.

Truly, who can resist a scene like this? So right about when we should be putting kids to bed we loaded up in the car and headed to Bonnie’s house to pick up our little sweetie.

I’m afraid we overwhelmed her with love. Sweetie quickly retreated under the ottoman.

Catnip on a string lured her out from hiding and a happy hour was spent watching her skip and play.

The boys fed her kitty chow right out of their hands and water out of a teacup. As Xander said, “She’s about a million times better than a Webkinz!” 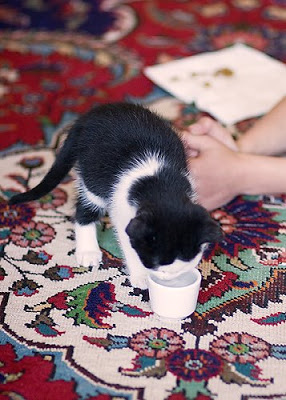 Finally, like good responsible parents we put the kids to bed and promised that kitty would still be here in the morning. Erik told me he was putting kitty to bed and this is where I found her:

I thought it would be so hard to talk Erik into a kitty(since he has NEVER had a pet), but he is obviously smitten.

The boys were up at 6:30 this morning playing the catnip game. By the time Xander and Hans left for school at 9 little sweetie was exhausted. Sweaty and stinky and feeling a bit foolhardy I left kitty in Mary’s care and jumped into the shower at 9:30(isn’t bathing always a risky activity for moms?). Emerging form the bathroom with dripping hair I rushed to get Mary ready for ballet.

“But I can’t find kitty! Where’s kitty?”she cried. Knowing that kitties love to hide I hustled her into the car and took off for ballet class.

At home Gabe and I began scouring the house from top to bottom. It’s a big house, but I didn’t realize it’s enormity until viewing it through a kitty’s eyes. Frustrated, I called my friend Cindy and asked her to bring the girls home from dance for me. Cindy arrived in her usual whirlwind of activity and supervised the search.

“Mary where did you see kitty last?”

“She went into the mud room and out into the garage and down that way…. I, I tried to take good care of her.” Mary started to sob and I fell apart.

“It’s OK sweetie. I know you tried.” But the realization came to me that kitty was likely sitting right by the garage door when it opened. She could be anywhere.

We told the neighbors and continued tearing the house apart but soon I had to run to the school to help with Teacher Appreciation Week. I saw Hans in the lunchroom and went in to tell him the situation. Darling Bonnie saw me from across the room and skipped over, “How’s kitty? Is she happy? Are you having fun?”

I started to cry. “We can’t find her.” Bonnie started to cry too(you can read her version of the story here) and soon the entire 5th grade was gathered around to hear the story.

As soon as I finished volunteering I checked Hans and Xander out of school to assist in the hunt. Their teachers didn’t even blink at my request.

With Mary and Gabe safely deposited at school and at Ashli’s house we were able to search every nook and cranny. As I walked down the street checking every bush, every clump of grass and fearfully looking for a small body in the road my heart simply ached. We had taken responsibility for this sweet little life and couldn’t care for her for even a day. In only a few hours I had fallen completely in love with this 12 oz. sweetheart.

Back at home Ashli held me as I sobbed.

Xander and Hans came home equally discouraged. “It’s such a big world and she’s such a tiny kitty.”

We been praying aloud and silently all along but I called the boys over for one more prayer. We kneeled, drank in the silence and heard the most beautiful sound, “mew, mew.”

And there she was, standing in the mudroom. We had left the outside door cracked open so that she could return but I don’t know if she ever left the house or simply took a 4 hour nap behind the garbage can.

My sobs came fresh and fast as I held her to me. With tears still running down my cheeks I called the school and told Bonnie that kitty was safe.

The boys kept a close eye on her for the rest of the day and except for a 5-minute scare(crying, panic) when she hid in one of Erik’s shoes, we did pretty well. Ben did suggest that, “This family may not be emotionally ready to have a pet!”(but we all know he is pushing for a dog— one step at a time, kitties are so much easier).

Still I think Ben loves her.

This is a test; this is only a test.