We drove late into the night and collapsed in a grimy casino hotel with scratchy sheets and a stale cigarette odor. At dawn we rolled bleary-eyed children into the car for another six hours of cramped travel. “Hurry, hurry, hurry!” was my only thought.

But as San Diego came into view, I was distracted. Lining the freeways and stretching down the avenues were hundreds of open-armed trees smothered with giant purple blooms. Ignoring Erik’s lack of horticultural knowledge, I asked him, “What are they?”

He didn’t know, but later that morning as I sat by the hospital bed holding my mother’s hand, I motioned to the purple blooms outside her window and asked her their name.

“Ah, those are Jacaranda trees.” she sighed. “They just started blooming. Aren’t they incredible? Ostentatious and elegant. We’re very proud of them in San Diego.” She lifted up a bit on her pillow.

“We don’t have real seasons here, you know, it’s 70 degrees almost year round. But everyone is excited when the Jacarandas bloom– it’s the start of something.”

Her head sunk back into her pillow as she closed her eyes. “They’re very messy trees you know. But I love them.”

The morning after my mother died I stepped outside to walk with my sister. Giant purple blooms covered the streets and sidewalks like a magnificent royal carpet. “It looks,” my sister said, “like the end of the jacaranda season.”

Native to the southern hemisphere, Jacarandas flourish in tropical and sub-tropical climates. Brisbane, Australia is famous for the thousands of jacarandas that line it’s streets and rivers. In the 1930s and 40s new mothers were given jacaranda saplings as a congratulatory gift from the hospital and now a drive through the city marks every home blessed with a child in those years.

At Queensland University in Brisbane, the blooming of the jacarandas marks exam season or ‘Purple Panic.’ Legend has it that if you haven’t studied before the jacaranda blooms fall, you’ll fail your exams.

For my mother’s birthday last week, my sister determined to plant a jacaranda in her own yard. The magnificent tree was a gift from Ruth’s San Diego friends.

Ruth has a fish pond in her front yard that is simply perfect for a flowering tree. After emptying the pond’s sludge for the past few weeks, my sister’s husband Bill and my dad rented a jackhammer to chip through the cement bottom.

Sweat pouring from their faces, Bill and my dad spent an entire Saturday chopping up the cement and hauling wheelbarrow load after wheelbarrow load into a trailer. But at the end of the day, after clearing out the chunks of concrete and a few inches of dirt they found another 6″ layer of cement.

On Monday, Mom’s birthday, Bill went back to work and Dad went to the fish pond. My dad isn’t a jack hammer sort of guy. In fact, he’s not a handyman in any way. When appliances spewed smoke or cabinet doors hung from their hinges, he encouraged my mother to call a professional. Dad’s hair is trimmed to a precise length, his shirts are always crisp from the dry cleaner (even on Saturdays), he carries a Blackberry and an iPhone and shuffles his work between five computers.

But he wanted to plant this tree. 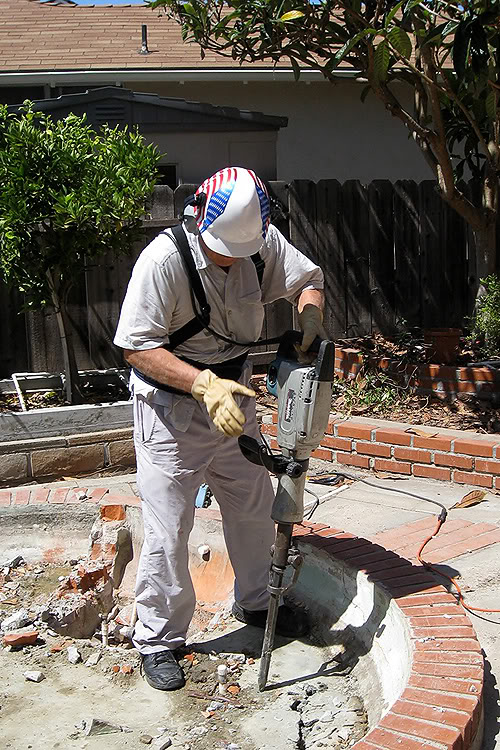 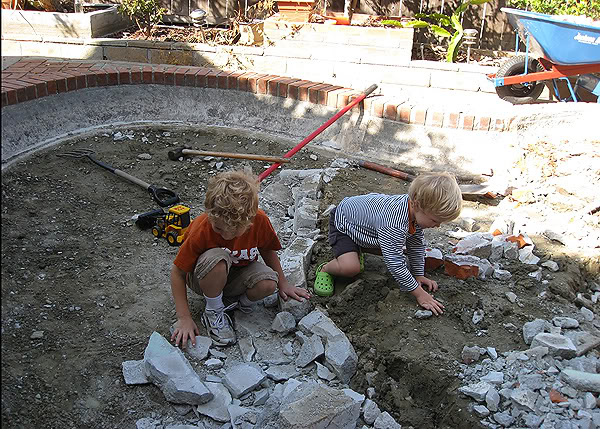 Discouraged, but not defeated, Dad hired two teenage boys to help. They worked in shifts, hammering through the cement, digging out the refuse and driving the trailer to the dump. By mid-afternoon they cleared out the second layer and began digging a soft round home for the jacaranda’s roots.

And then, they hit a third layer of cement.

My dad sat down and cried. And prayed.

A few minutes later a stranger ambled up the driveway and asked for help. His truck had just popped a tire and he had everything he needed to put on the spare except a car jack. Could my dad loan him one?

Dad rummaged through has car looking for a jack and explained his sweat soaked hair and cement dusted clothing to the stranger. As dad walked to the car with him, the stranger said, “I have something in my car that might help you.” He opened the passenger door and introduced dad to Manuel, a professional jackhammer.

While the stranger changed his tire, Manuel took hold of the hammer and used the fiesty little machine to break through the third layer of cement. In just 20 minutes he cleared a deep wide circle opening into soft earth. 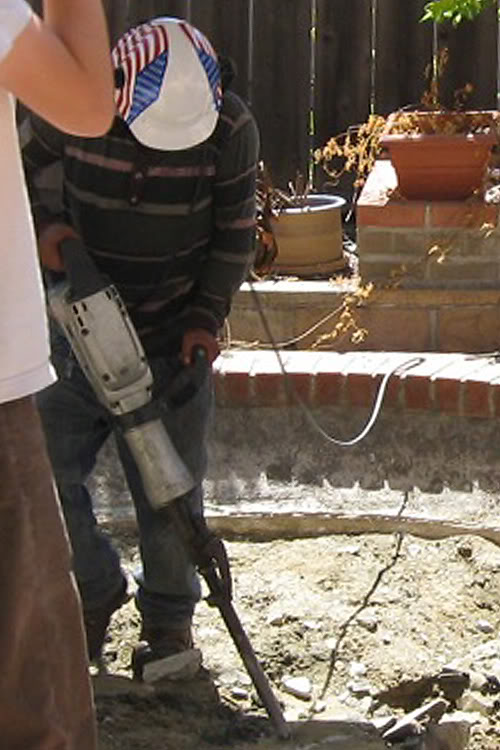 Angel at the jackhammer.

Tearfully, gratefully, my dad slipped Manuel a few bills and with his teenage assistants, hauled the debris to the trailer. He only had minutes to shower and transform into his white-collar self, before 30 friends gathered around the old fish pond to eat my mom’s favorite birthday cake, sing hymns and plant the jacaranda tree against the setting sun. 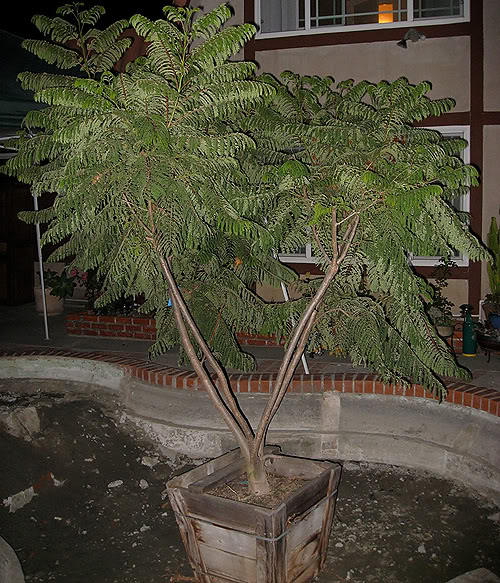 It’s beautiful, isn’t it? Just wait till you see it in season.

note: this is my first assignment for Travelin’ Oma’s School Days 12-WEEK SEMINAR. Oma’s blog is one of my favorites. She is funny, insightful and her blog is a visual feast. Every weekday for the next 12 weeks, Oma will post a several choices for a writing assignment on her blog. Want to join in?

Assignment #1~Every memoir has a catchy title. What would the title of your memoir be?