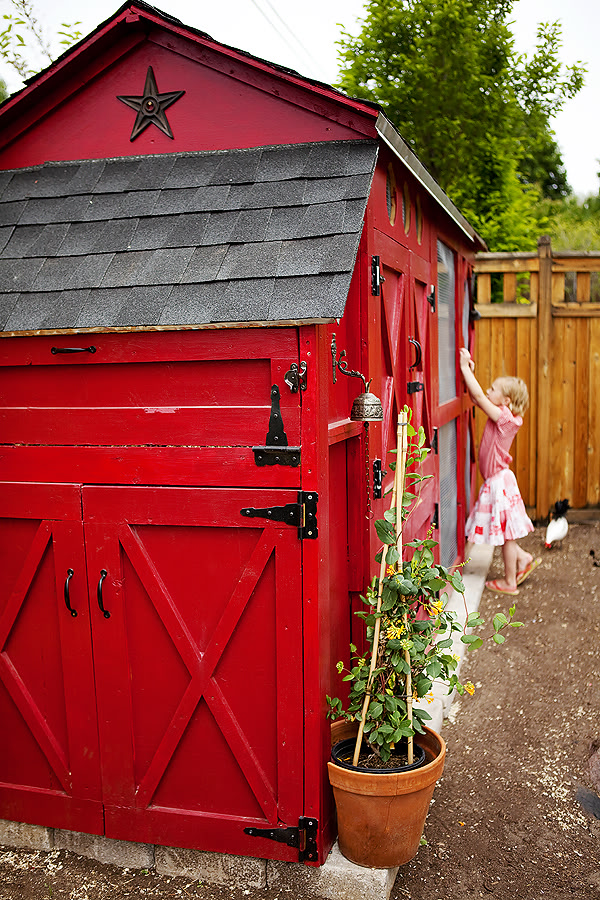 In a household of boys, nothing is better than a massive, creative, power tool wielding project. After admiring various chicken coops on the web they decided to steal the best ideas from all of them and add a few of their own. Without blueprints or plans they measured, leveled, drew diagrams, pounded shingles and cut corners and circles and angles.

My only contribution was running to Home Depot four thousand times, painting (and painting and painting) and adding the cutesy details.

I loved working beside them, listening to them joke and problem solve and holler with triumph when something worked. More than once Erik and the boys said to me– “Thanks for giving us such a cool project to work on.”

We moved the chicks into the coop about 7 weeks ago (no, they haven’t been living in my bathtub all this time) but didn’t get it quite finished until Memorial Day weekend. 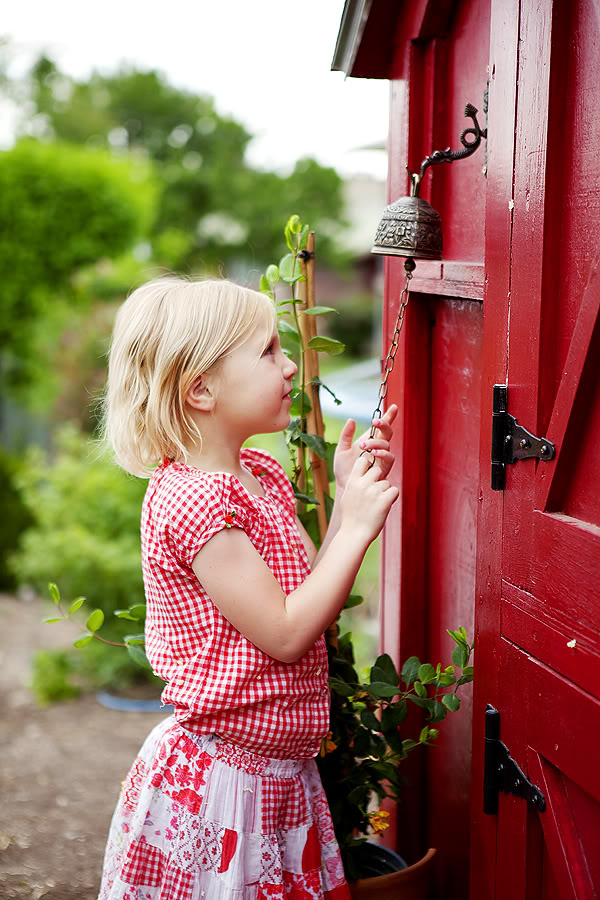 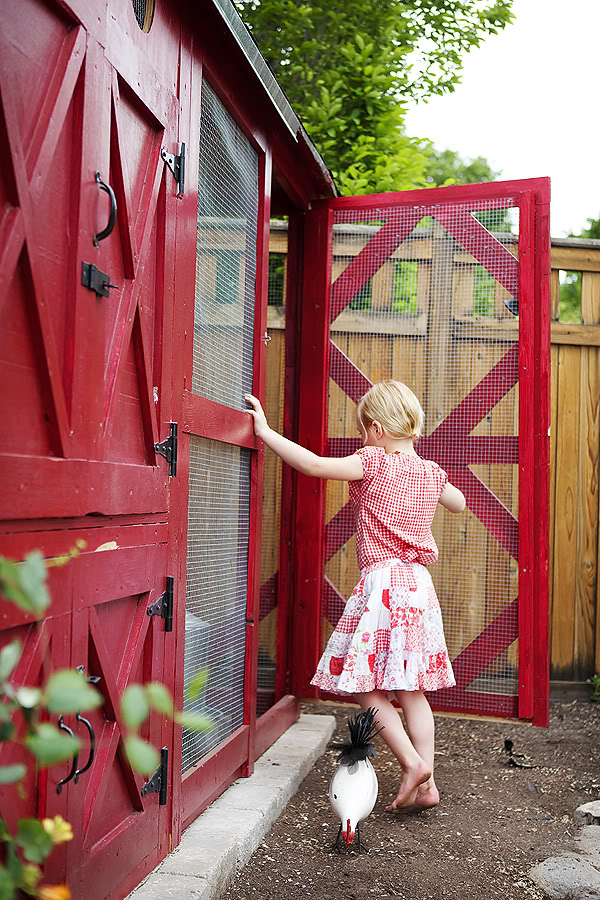 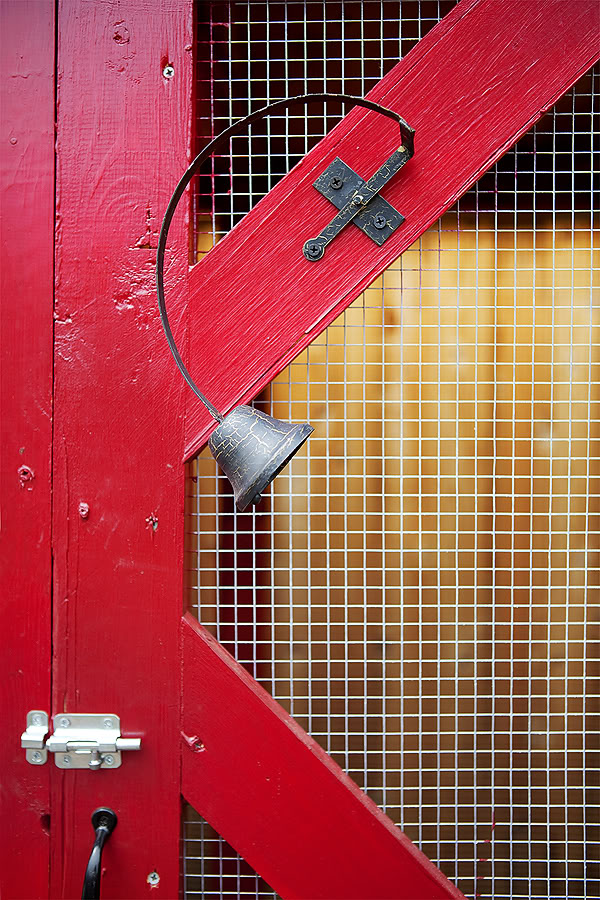 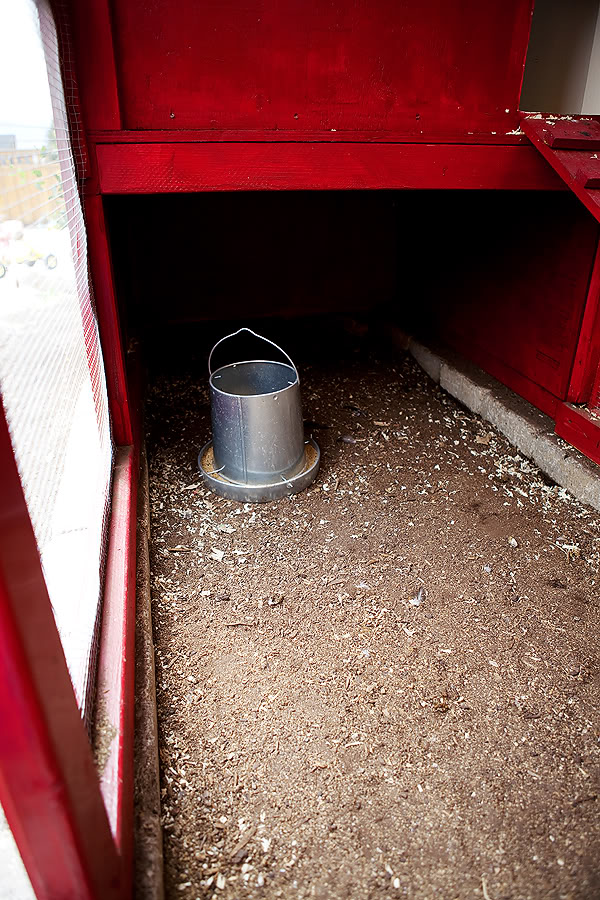 nobody’s there (all those photos of coop perfectly pristine coops on BackyardChickens? Someone took those before the hens moved in.) 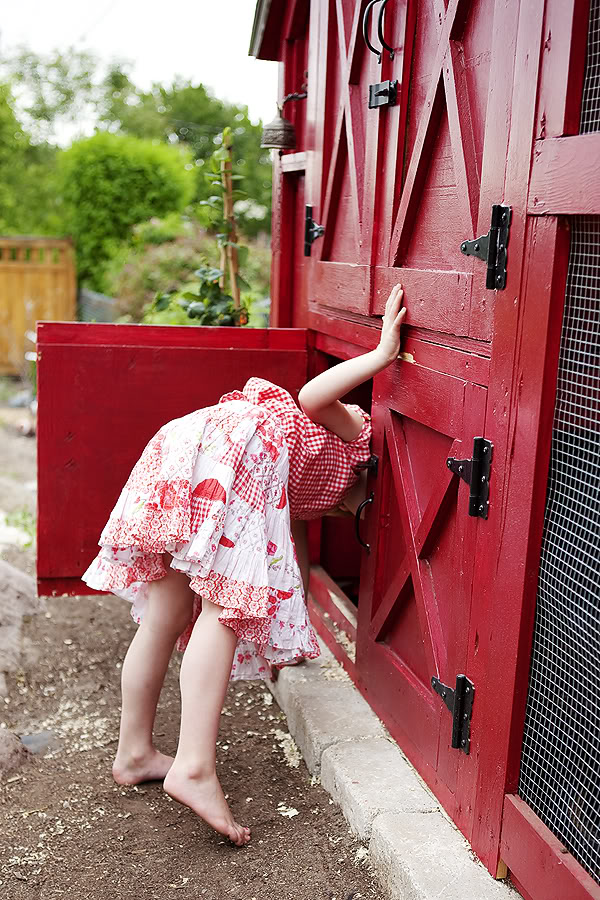 hmm, are they under here? 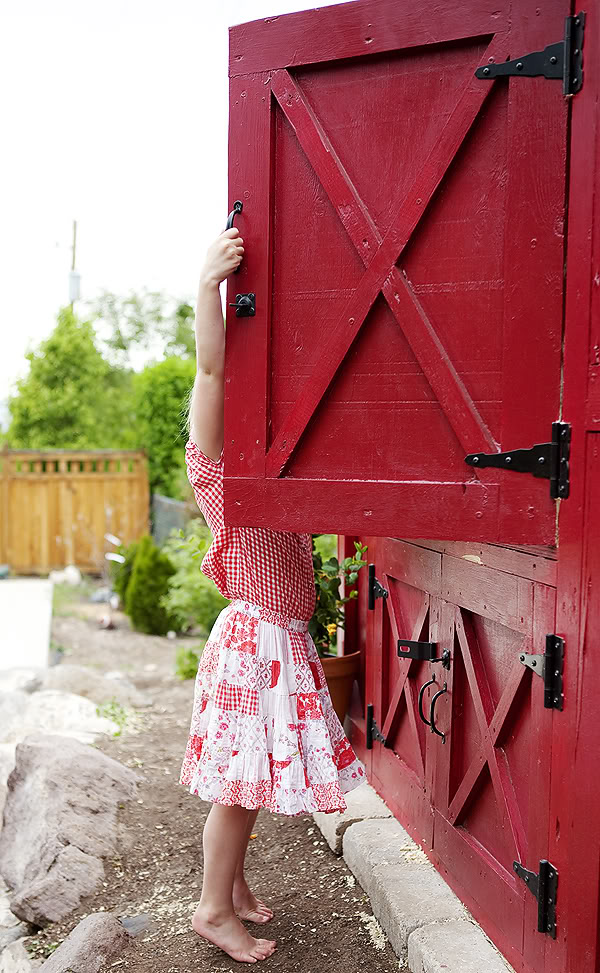 maybe in the roost? 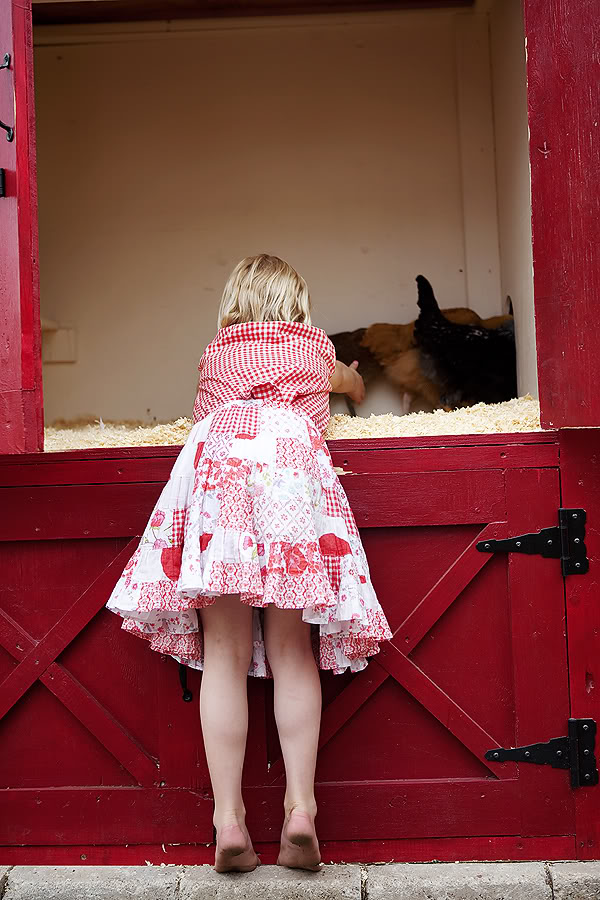 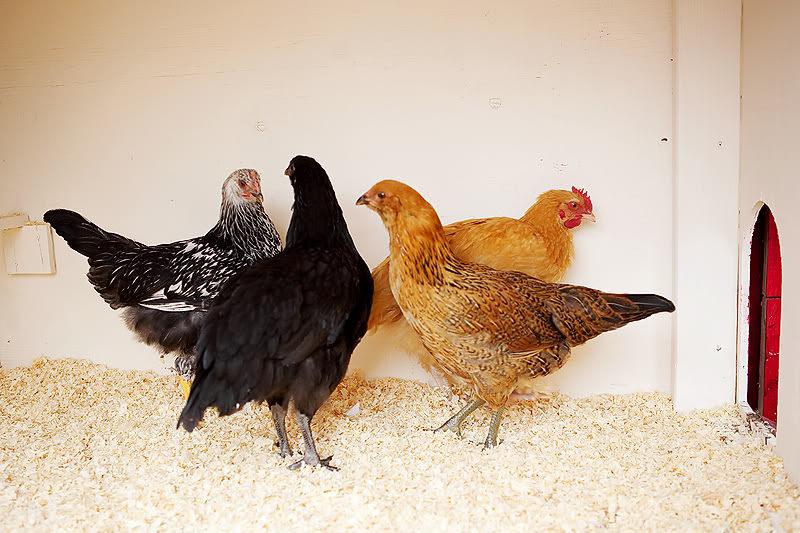 Every stereotype about chickens seems to ring true. They love each other and are always together. When we let them out of the coop they move in a cluster and cluck with concern when one moves out of sight– they really, really remind me of thirteen year old girls.

The farmer’s store has signs everywhere. “You must buy at least three chicks.” They’ll die if left alone. I’m finding all kinds of meaning in that concept. 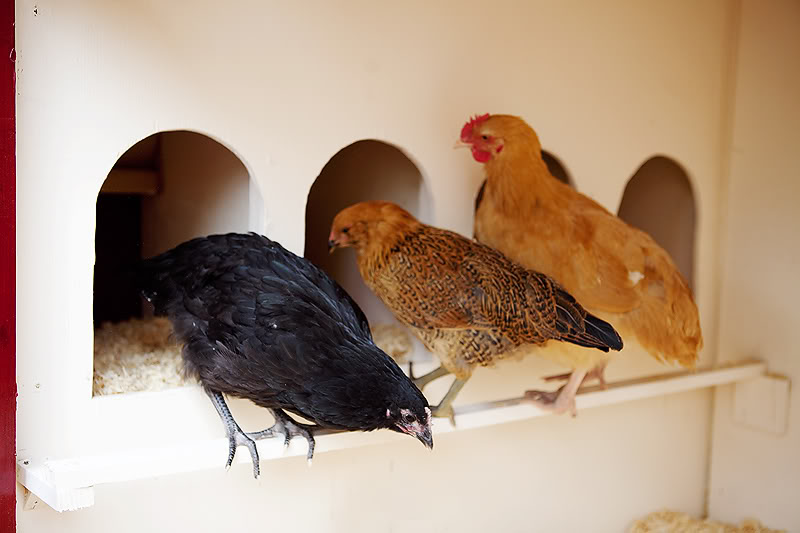 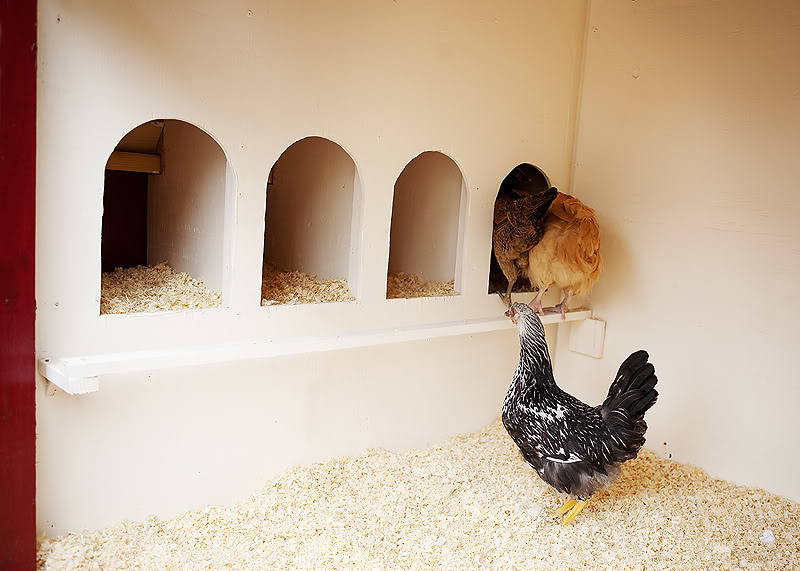 We built a nesting box for each of them, but they like to crowd into one. 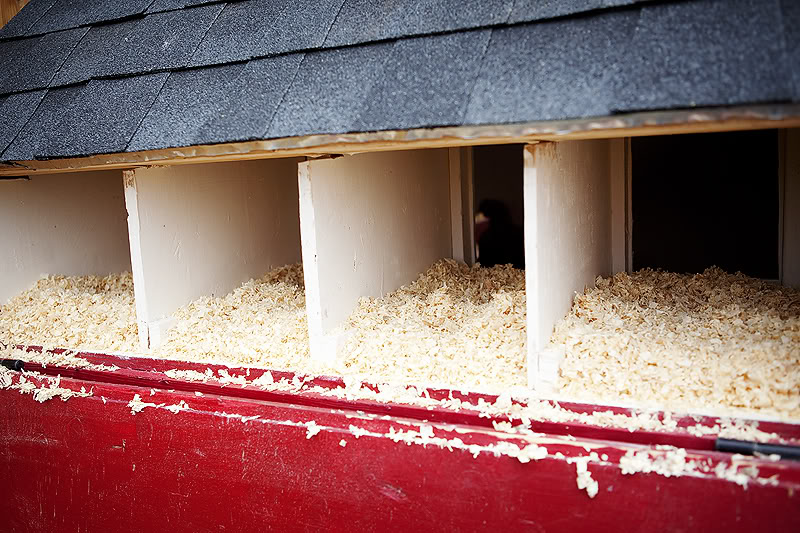 the nesting boxes from the outside 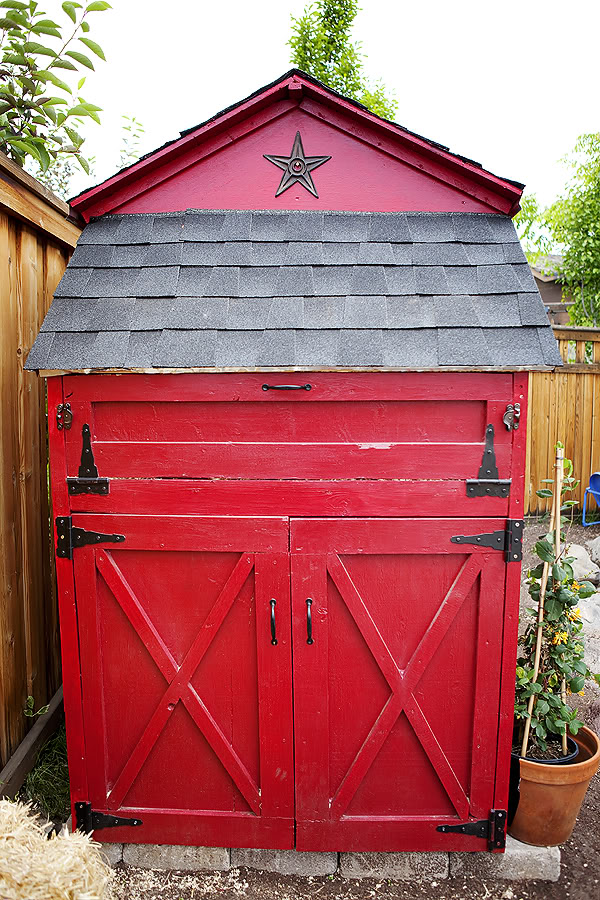 Sometime in August, we’ll open the upper door to collect eggs from the nesting boxes. The bottom doors are simply storage. 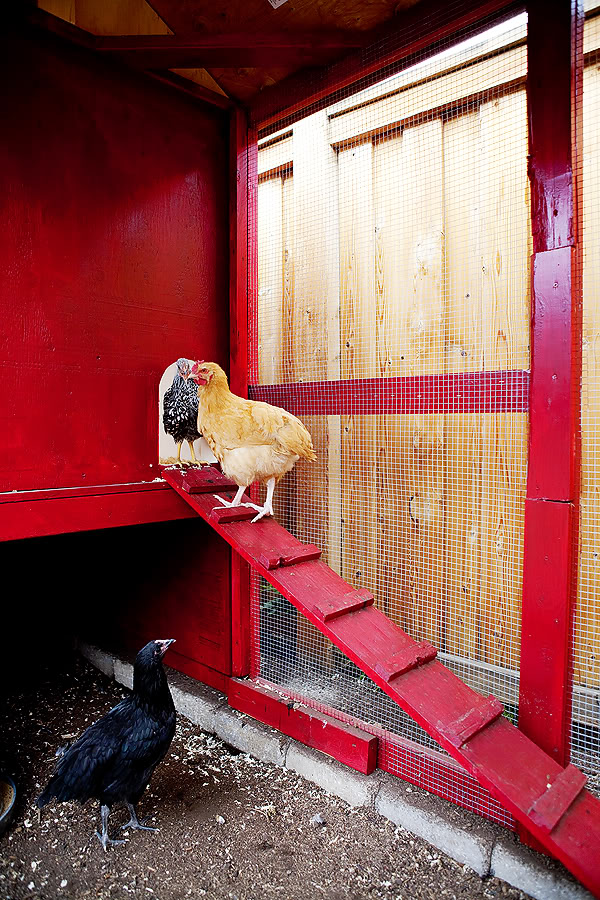 the chicken ladder. We were amazed that they instinctively knew how to use it. 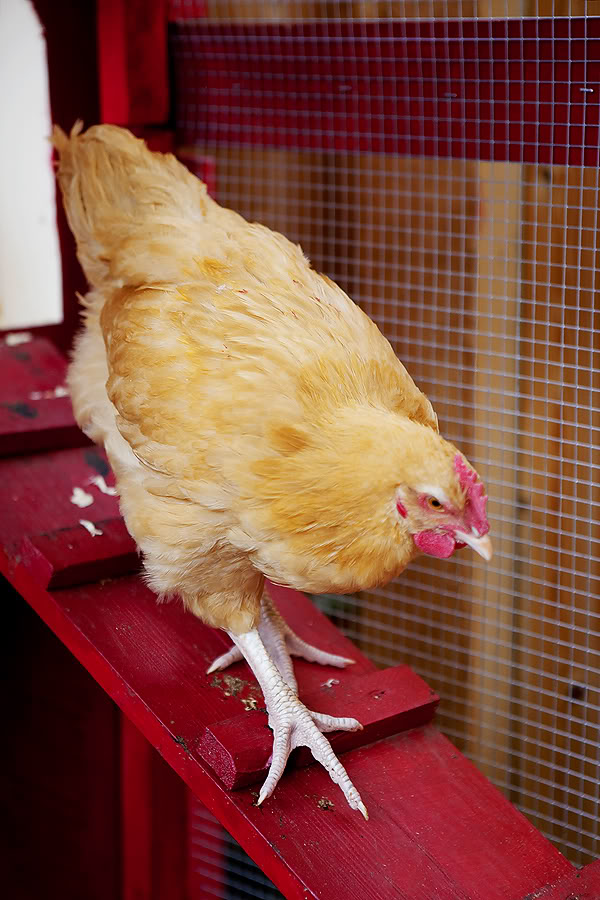 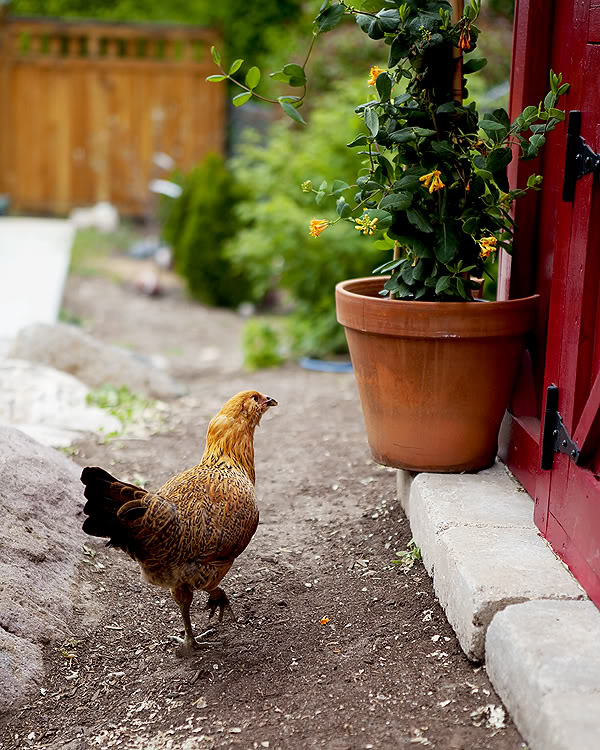 Abby taking a stroll. Since these photos were taken we planted the honeysuckle against the fence. My thought was that the honeysuckle would combat the chicken smell– but they’ve been surprisingly unstinky. I think it’s the wood shavings in the roost. 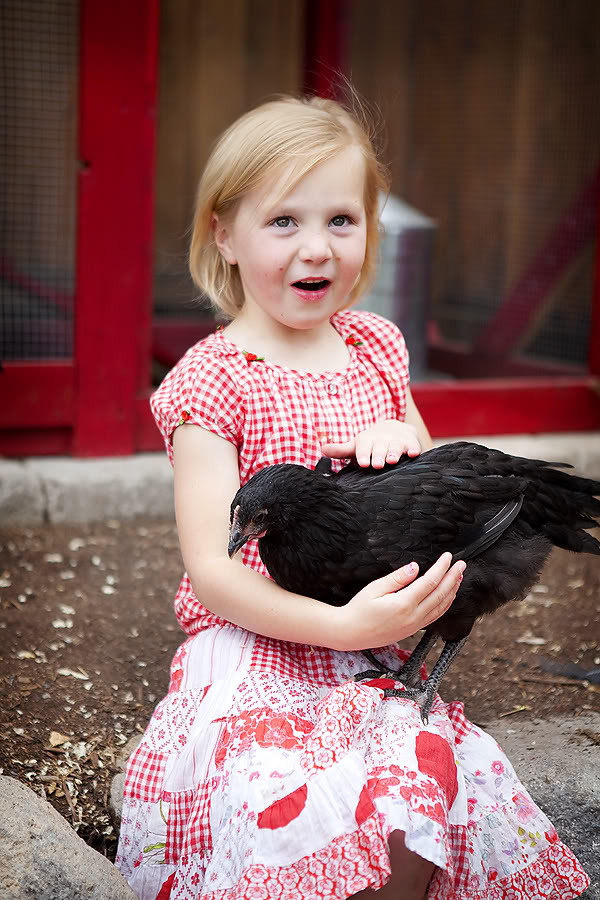 Despite their ever-increasing size (can you believe they are not quite three months old?), the chickens are as gentle as chicks and happy to be held. 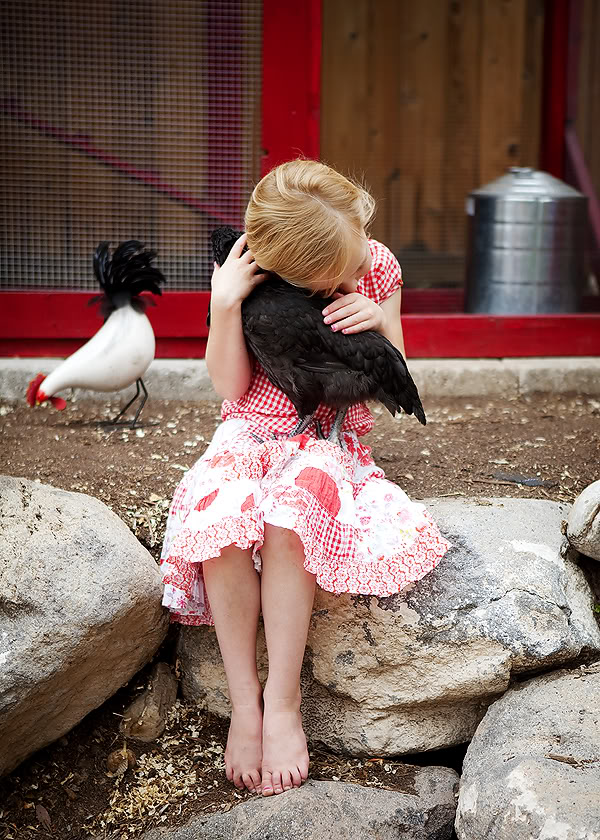 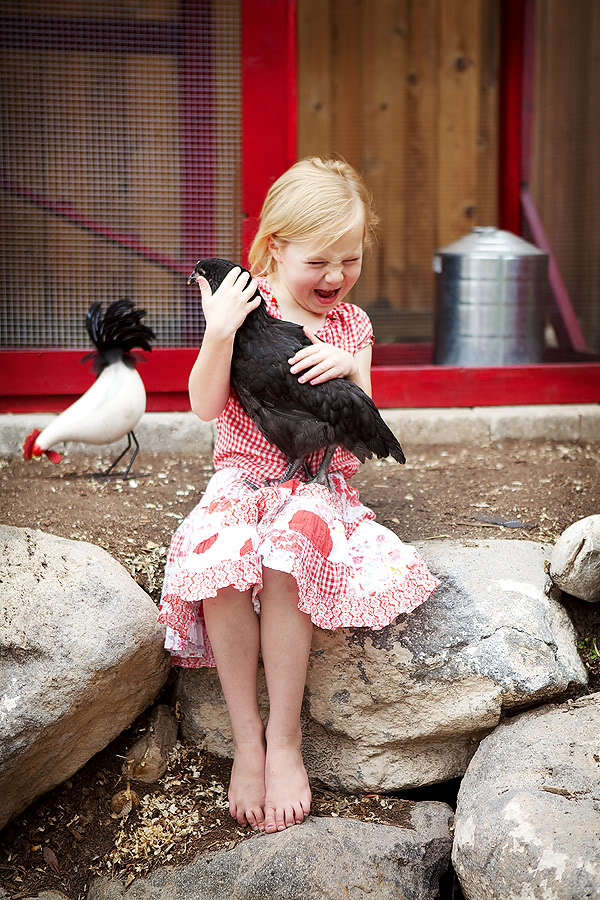 love, love, love
p.s. hopefully this balances enough information for people looking at chicken coop construction without boring the rest of you. Oh yes, the measurements are approx. 4′ wide, 11′ long and 7′ tall. Everything is from Home Depot except the bells and star which came from our cool local hardware shop. Here’s a nice dull front shot: 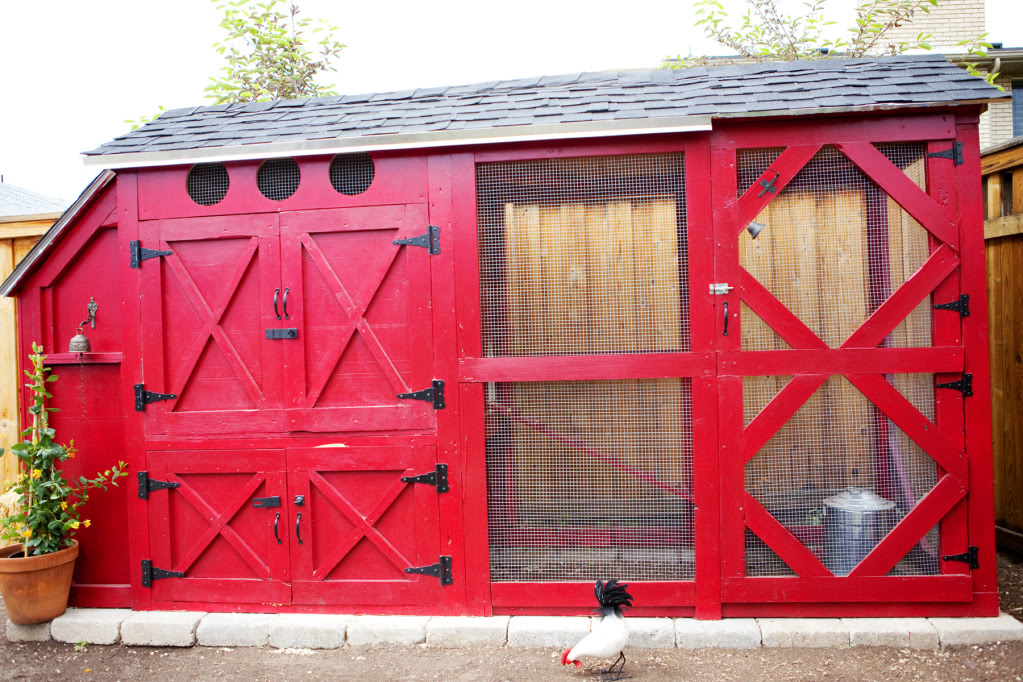 p.p.s. I have many more photos and much more to share about Betsy, but I think this post is long enough. Don’t you? 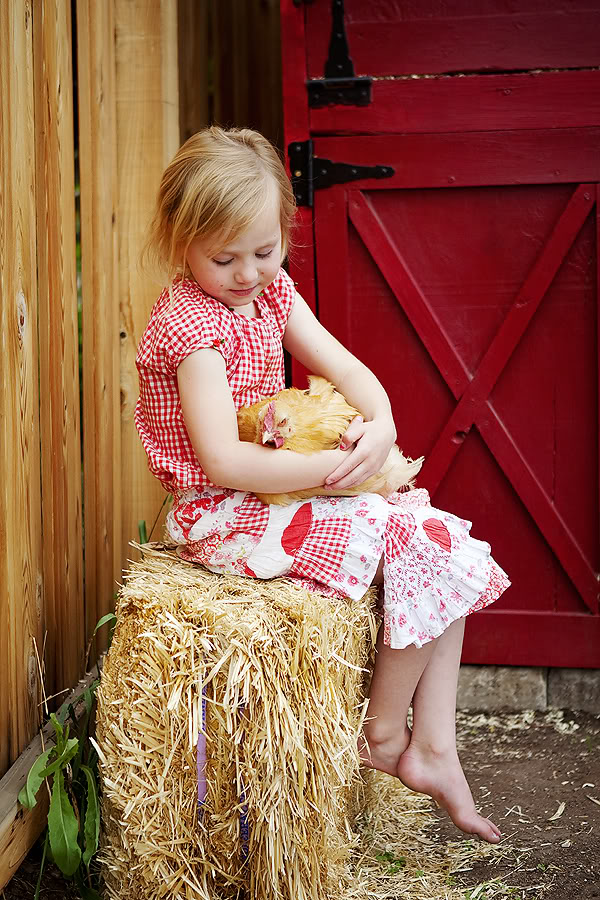 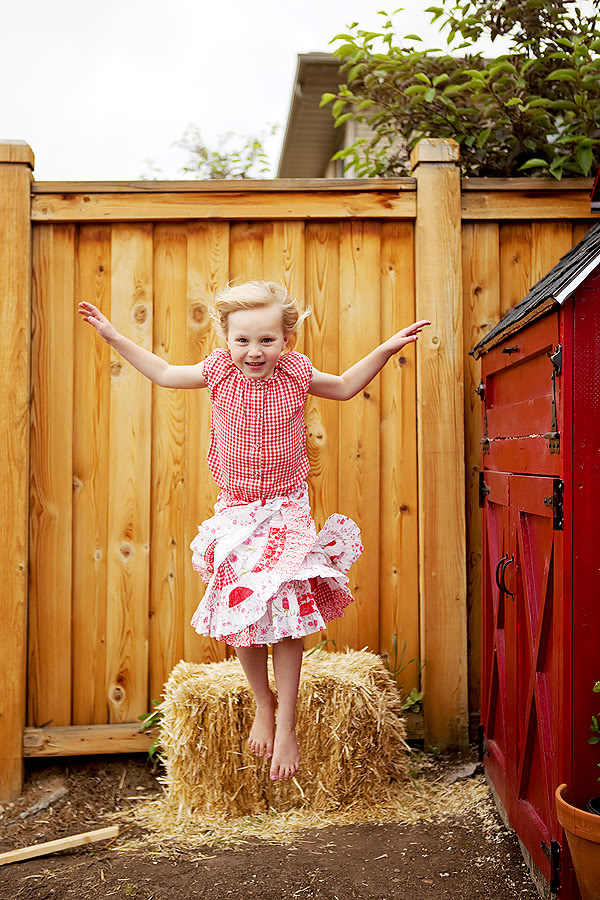