Maybe we should give all the credit to Laura Miller.

It all started, really, in 1994 when we moved onto Westminster Avenue.

Our across-the-street neighbor Laura, with her listening ear and endless kindness, welcomed our little family, invited Ben to playdates and helped me navigate the neighborhood. Within a few weeks Laura introduced us the Drysdales– still on Westminster, but sixteen houses down– far enough, that without Laura, I’m not sure if we would have met.

Laura Miller and Kris Drysdale soon became my mothering mentors. All three of us had two year olds, but they both had FIVE year olds. And it’s almost impossible to quantify the amount of knowledge a mother gains in those three years. A mother of a five year old has navigated potty training, birthday parties, preschool, family vacations, picky eaters; Kris and Laura knew all the best picture books, playgrounds, ways to serve vegetables, how to survive a grocery store temper tantrum…

I’m afraid I completely pestered both Laura and Kris in those days. Nearly every day I showed up on one of their doorsteps seeking advice and friendship. I’m kind of surprised they didn’t chase me away.

Our two year olds– Ben, Sammie and Evan– played often and by the time they were three both Ben and Evan determined they were going to marry Sammie. Ben distinctly remembers a fight on the swing-set one day where they both insisted they would win her heart. Sorry about that Evan.

The Drysdale’s home was a bit of a wonderland. Chris and Kris are both extraordinarily creative people and they were always doing something wonderful like crafting tulip shutters (Chris) or knitting up a Norwegian sweater with no pattern (Kris). It was a house full of toys and books and cookies cooling on the counter. In addition to five-year-old Dexter and two-year-old Sammie, entered brand new baby Xander, just four months younger than baby Stefan. Yes, that’s where we first fell in love with the name Xander. But three years later, the Drysdale’s added baby Benjamin to their family, so it’s all fair (and confusing). 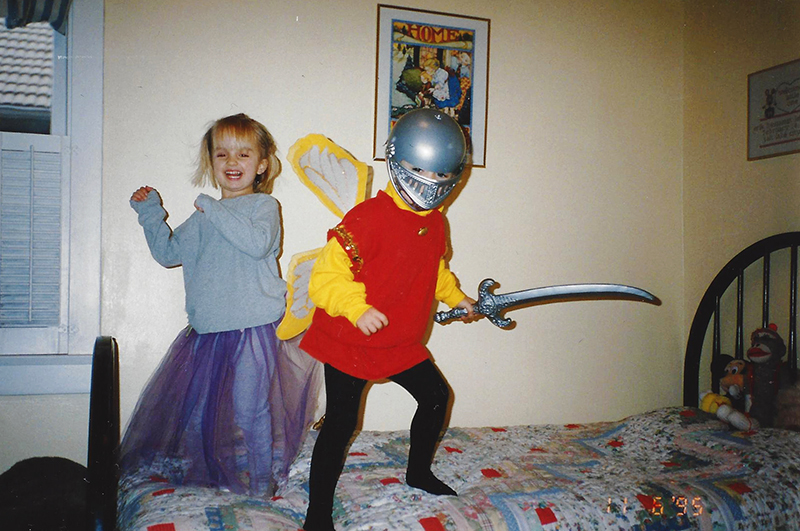 There may have been some kissing involved.

In 1997, when Hansie was just a baby, we moved out to Sandy; the Drysdale’s vacated Westminster for the allure of Park City. We occasionally gathered for dinners and picnics, cookouts in the canyon, violin recitals… When Mary was born, Sammie knit her a tiny pair of pink and cream mittens.

Both families moved again and ended up in the same schools. Junior high awkwardness and high school hesitancy kept Ben and Sam from any real conversations during those years. Friends found out about their childhood friendship and both were teased about the other. Kris and I kept up through school and orchestra events, we complained about silly graduation requirements and I delighted in her latest knitting project. Since the Drysdales are so widely admired by everyone they meet I took a certain pride in claiming them as old family friends. And I especially took pleasure in watching Sammie. Graceful and understated she skated competitively, danced with CDT, played piano concertos, always chose the challenging classes over the easy A, dressed like a young Grace Kelly and always had a minute and a kind smile to talk to the mother of her childhood friend. Last December, Mary and I went to tea with Sam and her mom….and Mary fell in love….which is why we encouraged Ben to ask her out… 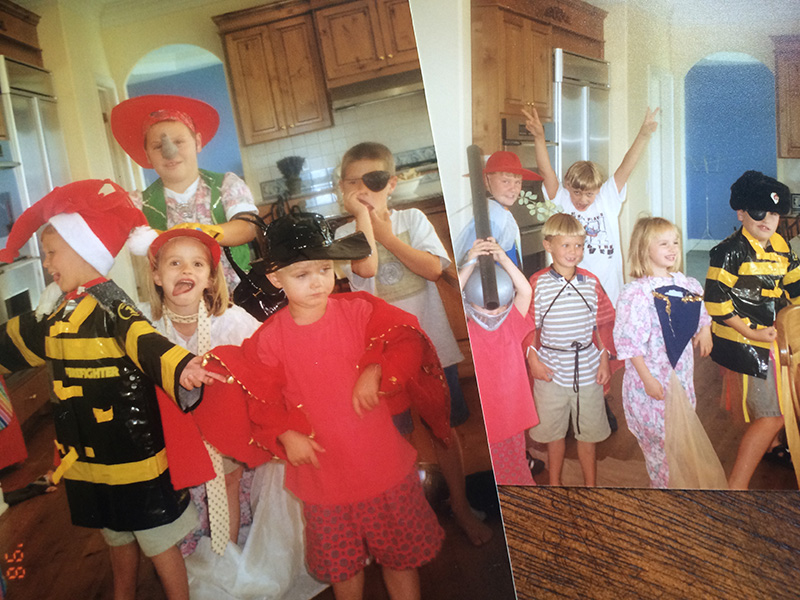 But if you ask Ben, it all started, really, two days after Christmas when he took Sammie on a lunch date. He thought it would be no big deal, just a chance to catch up. But when they met at Pizza Limone they ended up staying four hours just talking and talking and talking. Ben came home and asked, “Is it too soon to call Sammie again? Can I take her out tomorrow?” 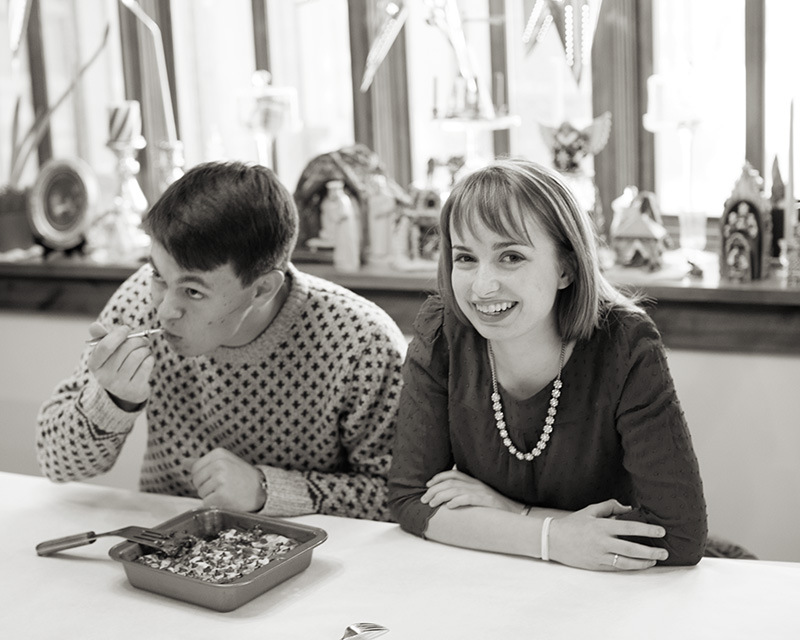 By New Year’s the rest of us could see sparks flying. Or maybe Ben was just in love with Sammie’s cream cheese chocolate brownies? Have I mentioned she’s one of the best bakers you’ll ever meet? 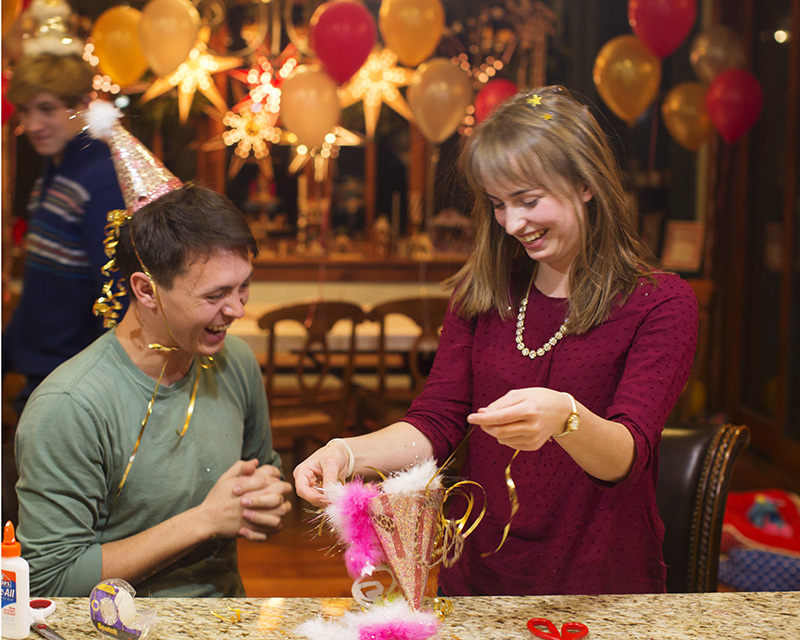 Competing to see who could create the most obnoxious hat for each other. And there may have been kissing…on our roof… during New Year’s Eve fireworks… 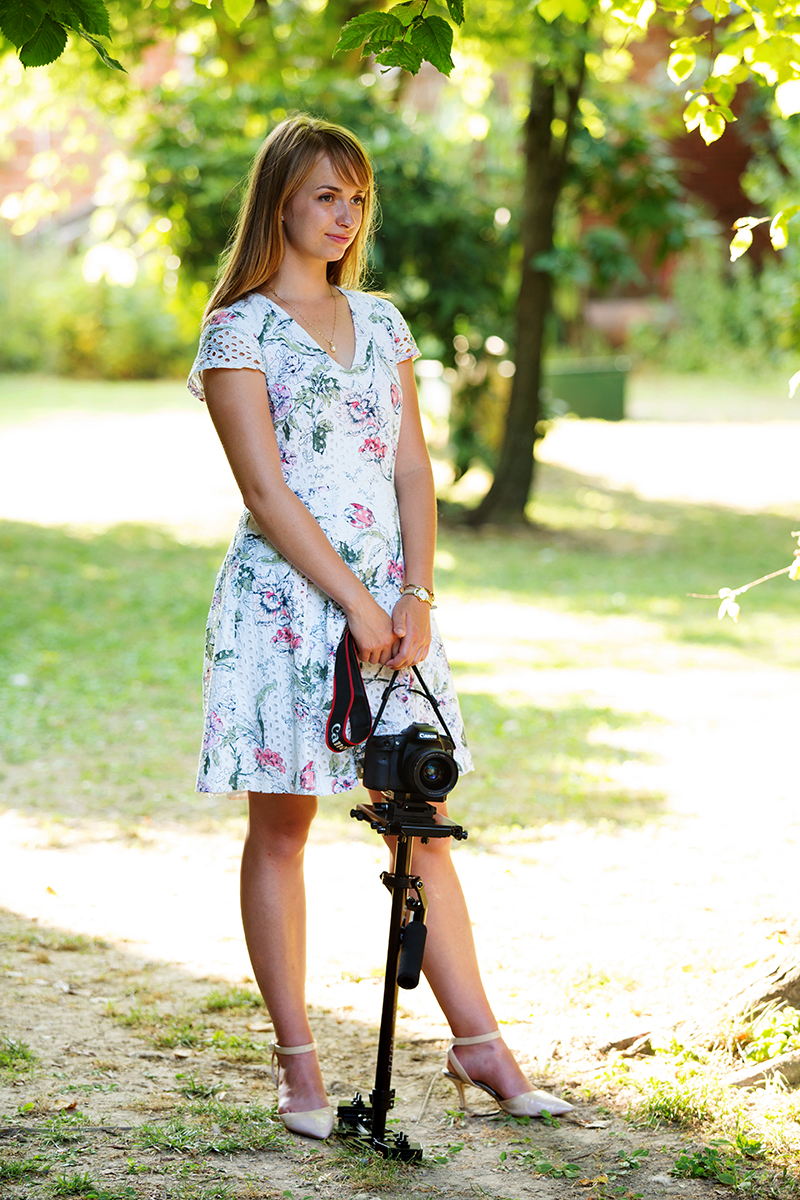 And so, they dated. They were ups and downs, birthdays and breakups and everything that goes into every good love story. Ultimately, as much as both sets of parents love each other and no matter how much both sets of siblings adore each other, it’s all about Ben and Sammie. In some ways, their almost instant bliss and the way everything looked ideal on paper made things confusing. Can anything in this world really be so nearly perfect? 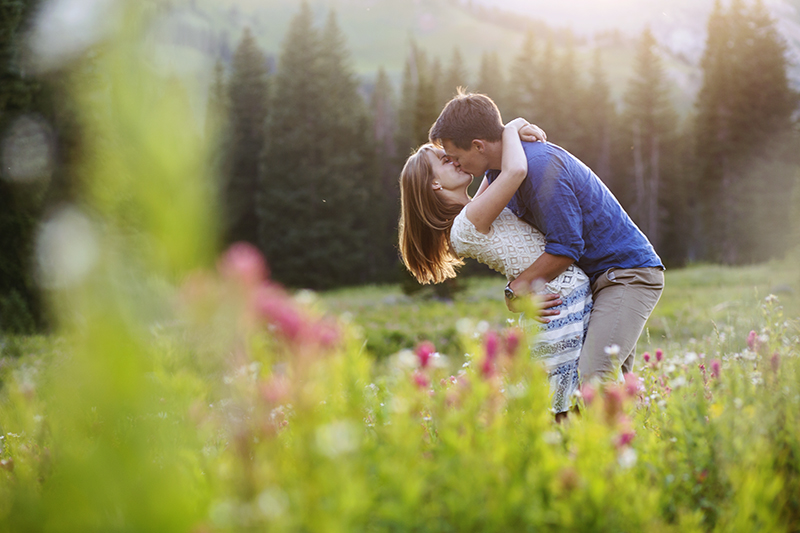 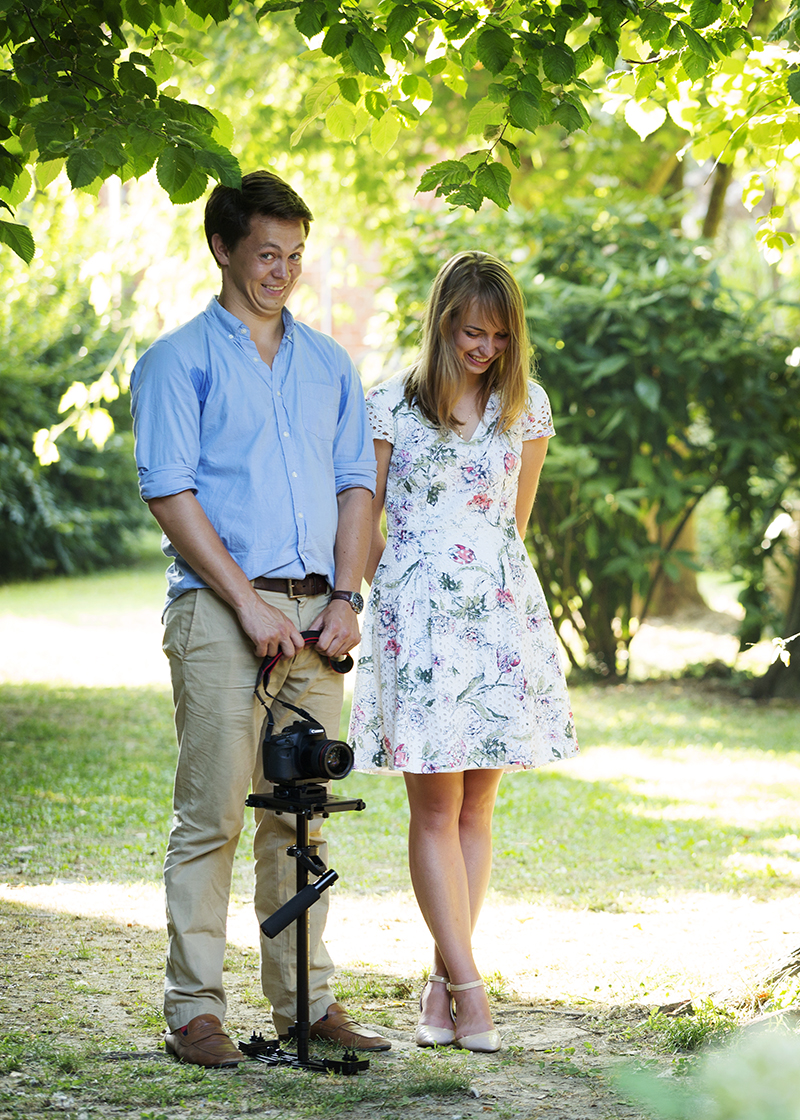 Coincidentally, both Ben and Sam had European adventures planned for this summer even before they started dating. Ben was accompanying me to the Bradford wedding to help with photos and filming and translation; Sammie to the Netherlands where she was finishing research on her novel (which has already won prizes and interested publishers). Since Ben’s been studying German, he determined to go a few weeks early, spend a few days with Sam’s family in the Netherlands, create his own language immersion program in Germany and meet up with Sam and Stefan in Italy a week before the wedding.

Netherlands Part 1 – The Land from Ben Lehnardt on Vimeo.

Netherlands Part II – The Boat from Ben Lehnardt on Vimeo.

And then, a week in Italy where Stefan chaperoned and perfected the three person selfie. By the time I showed up with my camera, it was clear more than one wedding was on the horizon. Three weeks traveling through Europe– as blissful as it may sound– represents a compression chamber full of stresses: missed trains, money issues, illnesses and exhaustion, but also gorgeous views and moments of delight, countless opportunities to show kindness, patience, generousity or their opposites. 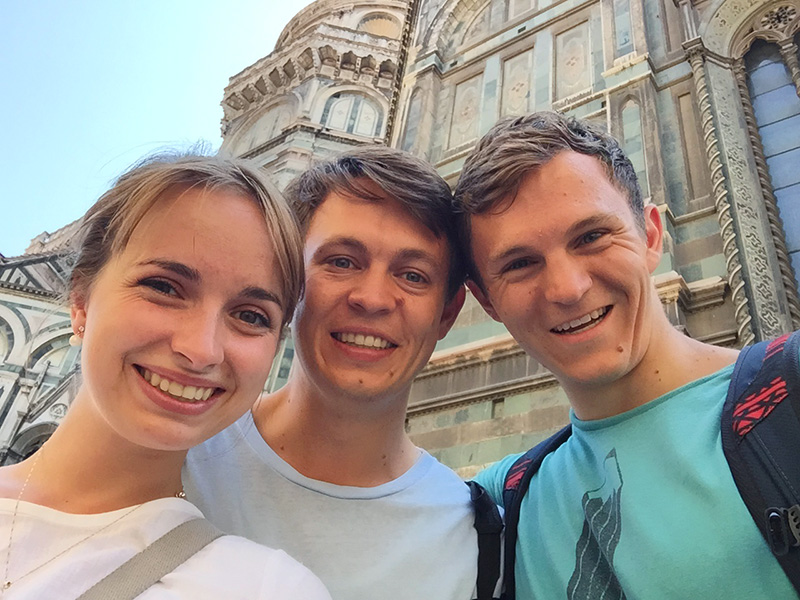 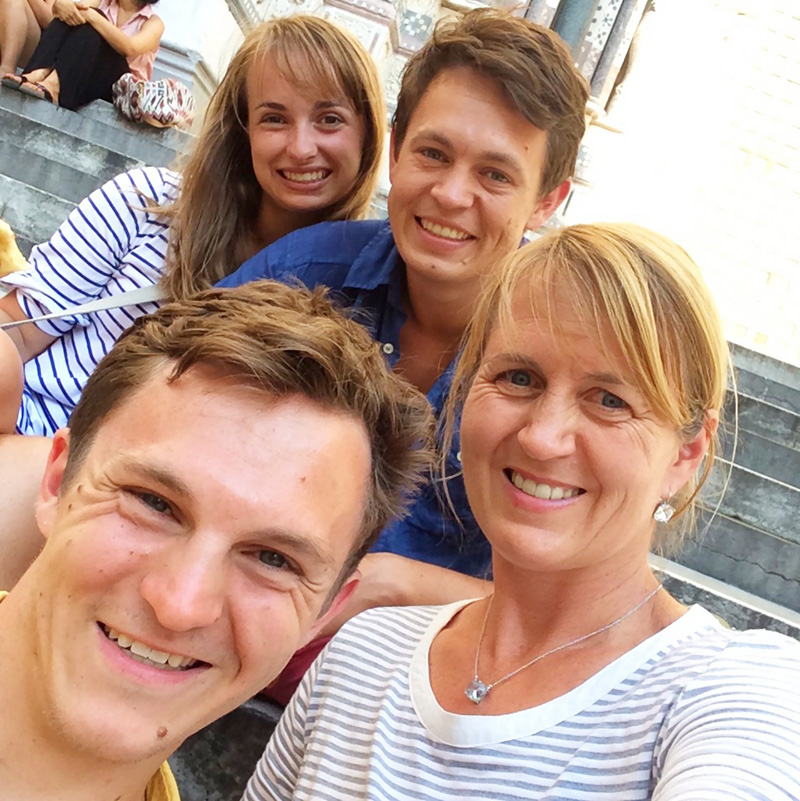 Just ten days after arriving home, and the night before Hans entered the MTC, Ben and Sam announced their engagement.

Thrilled, delighted, ecstatic– all understatements. We’re full of cliches…over the moon, seventh heaven, walking on air and jumping for joy. 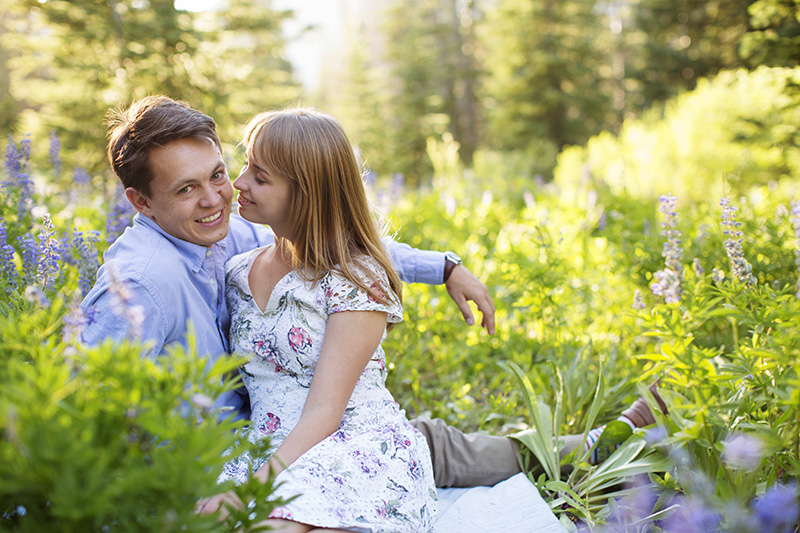 A little about Sammie– most people call her Anna, but we call her by her childhood nickname for Anna Samantha as does her family. She’s extremely impressive on paper with three degrees (French, German, English) and a stack of honors, Editor of the University of Utah Chronicle and recipient of the Honors Thesis award. This fall she’ll teach at the U while pursuing a graduate degree in French Literature with a full fellowship.

In truth, Sammie’s resume sounds impressive, but it almost cheapens the essence that is Sammie. She is kindness and goodness personified, she’s clever and creative and good. Her cookies make us swoon, her puns bring us to tears with laughter. Every single person in our home flat-out adores her….but none as much as Ben. I’ve never seen him so happy.

It all starts, really, on September 25th. I think they deserve each other.