bring on the jokes

When I refused to read Mary the most boring book on her shelf last night, she scoffed, “And you’re supposed to be mother of the year?!”

Despite Mary’s teasing, my children are bursting with pride, as are my close friends.

But I’m a bit afraid people who don’t know me will raise their eyebrows and whisper to each other, “Her? Really?”

And not just because I forgot soccer treats or sent my kid to school with a lousy science poster, but because I too pictured someone much more spiffy and pulled together for Utah’s Young Mother of the Year.

Let’s make this clear– my closets and pantry are a mess, I hardly ever volunteer at school and cereal and bananas stand in for dinner more often than I’d like to admit.

But I love my children with every particle of my soul and I passionately believe motherhood matters. I devote the best of my time, my creativity, my intelligence and my energy to my family and I believe the rewards are greater than any career, award or accolades.

I am no better than hundreds, thousands of other young mothers in Utah, but I am proud to represent them this year. And I wouldn’t tell you at all, but part of the honor is the obligation to open my mouth (though I sent the kids to church with strict orders, “don’t tell a soul!”). 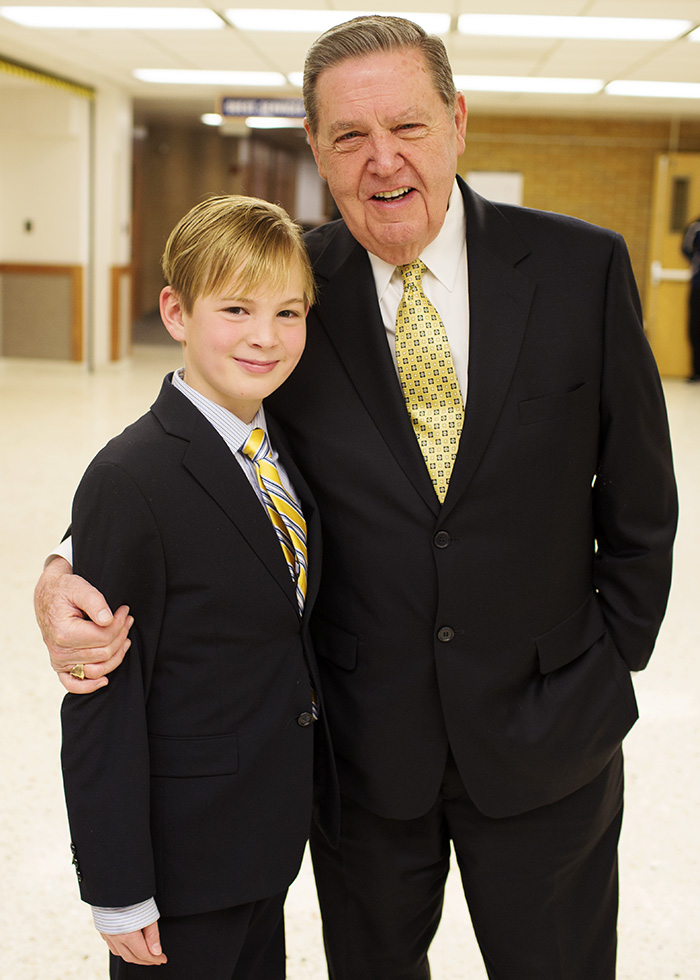 Gabe would wear a suit every day, everywhere, if he could.

Attending the American Mother’s Luncheon Saturday, I didn’t know what to think. I was a bit embarrassed about the nomination and confused about the process. But I was greeted with warmth and enthusiasm and kindness. The American Mothers aren’t superwomen with a “system” and mile-long resume; they vary in age, race, education and financial status but are united in their belief in the worth of every soul and their conviction mothering matters, conscientious parenting makes a difference and we can all learn from each other. 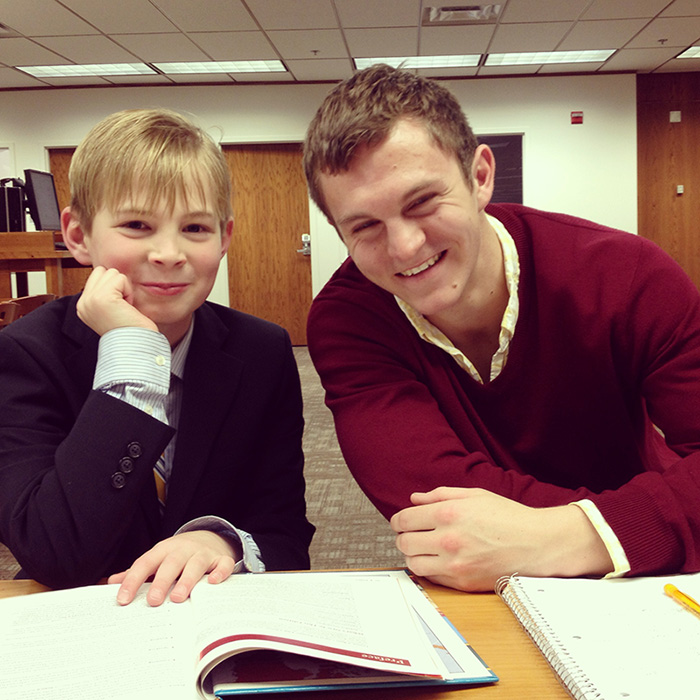 visiting Stefan in his natural habitat– the BYU library
And learn I did. Between the chit chat in the halls and 23 short speeches (one from me) I gleaned a wealth of information. Afterward, I called my sister and said, “They are all so fantastic. There’s no way they’ll choose me to represent them, but I feel like I just made twenty new friends.”
Darling Gabe accompanied me for the day– and I could scarcely choose a better companion. With his dimpled smile and ready jokes, Gabe kept me laughing all day long (and I’m afraid we were both a bit punch drunk by the end of the day). He was richly repaid by meeting one of his heroes, Elder Jeffrey Holland, one of the Twelve Apostles and a master speaker; treat yourself to one of his gems here, here or here. Elder Holland’s incredible wife, Patricia, was nominated for Mother of the Year (the grown up version). Rushing away from building with Habitat for Humanity, Stefan arrived for part of the luncheon and all of my three minute speech in cut-off khakis and blood dripping down his leg. No one blinked at his attire and he was greeted warmly by everyone. 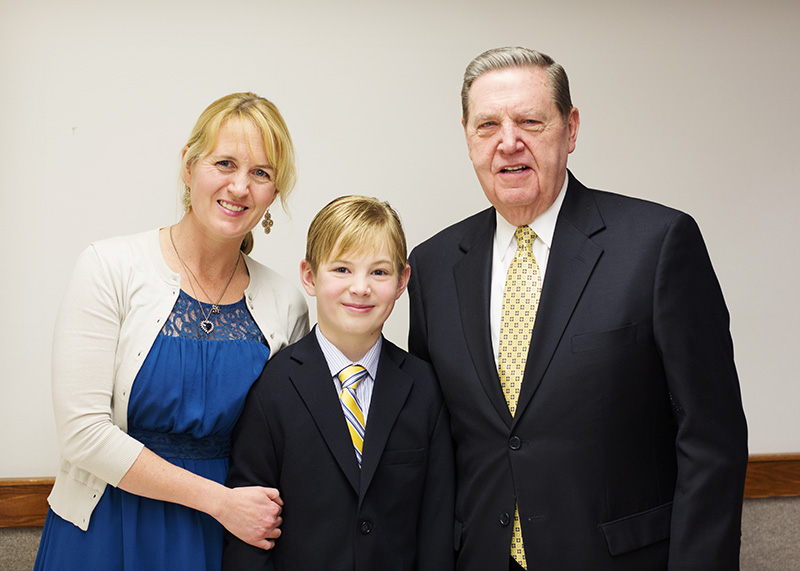 In 1988, Elder Holland was the President of BYU and my Book of Mormon teacher: Elder Holland‘s class was THE big perk for scholarship students back then.
I was delighted to qualify for “Young Mother” but only by the skin of my teeth. A young mother nominee can only have one child over the age of eighteen (and Stef will be turning 19 in a matter of weeks). Phew. Nice to know I’m still young. That alone will put a spring in my step all year.
No one at AMI regards the process of selecting Utah Mother and Young Mother of the Year as a competition. Because really, how would that work? It’s simply a matter of choosing a representative. I’m humbled to represent the Young Mothers of Utah and excited to have a voice at the National Convention. 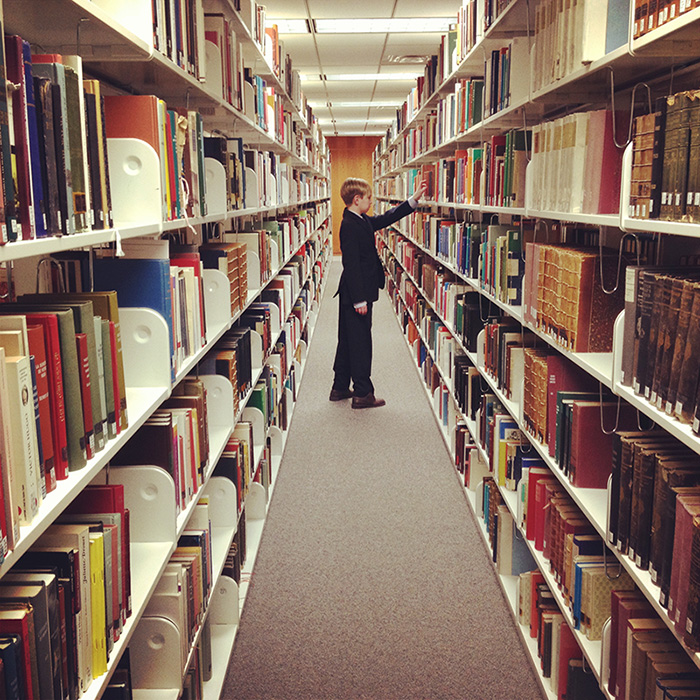 from me to Gabe– all Victor Hugo and mostly in French.
And the jokes? Sigh. I’m going to pay for all the times I teased Stefan when he did something dumb, “You got a 36 on the ACT?” Because I will make mistakes and forget carpool and hurt feelings. But I will keep trying and improving and praying for help, because my children are worth all my efforts. Every bit.
When I arrived home Saturday I opened a handwritten birthday letter from Ben. Tucked into the fourth paragraph was this: “By now I’ve learned to take care of myself. I can cook and clean and do all that stuff. But what I’ve learned since leaving home is there was so much more you did. There is a kind of irreplaceable spirit a mom brings. Not even my companion making cookies can come close to it.”
“My mother had a great deal of trouble with me, but I think she enjoyed it.”
—  Mark Twain