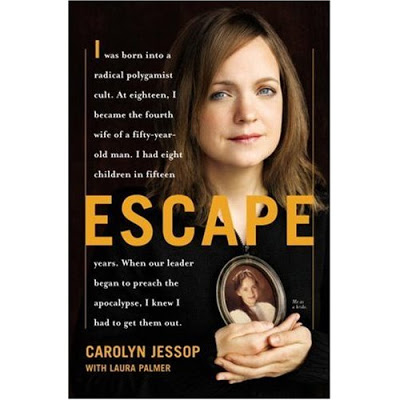 The picture of this book has been tantalizing me on my friend’s blog for months now. What Jan forgot was to put a warning next to it: DO NOT PICK UP THIS BOOK IF YOU HAVE WORK TO DO, CHILDREN TO CARE FOR, MEALS TO PREPARE AND VALENTINES SCATTERED ALL OVER THE HOUSE.

I kid you not, I picked it up Monday to read just a few pages. I couldn’t pull myself away. Soon the house was in chaos and I had to hide the book in cupboards, beneath loads of laundry and finally under my bed just to get the basic tasks of the day accomplished. Yesterday was just as bad: scripture group at my house, 4 kids home from school, errands to run, packages to ship and all I could think about was my book. Erik was out of town last night so I just stayed up really late and finished it.

Needless to say, it’s an absolutely fascinating book. I’d heard about Carolyn Jessop and her escape from polygamy on the news, but learning the details was both horrifying and enlightening.

Living in Utah, I’ve caught glimpses of polygamists. You’d see them at the grocery store with their long dresses and tennis shoes, piles of kids and stern looking parents. I hired some to clean my house after Gabriel was born in 2002. They were just young girls and I found them up in the boys’ room playing with all the toys. Reluctant to talk about themselves, I didn’t get to know them at all because a few weeks later they were called down to Colorado City by Warren Jeffs.

I haven’t seen any polygamists since.

We’re fascinated by polygamists here. It’s such a strange lifestyle and nearly impossible to understand. Of course most of my Mormon friends have polygamy in their ancestry but the modern day LDS church and the FLDS(polygamists) are completely different. (My one sentence explanation for polygamy in the past: there were too many female converts w/o husbands and the church needed stability and growth.)

Carolyn’s description of the physical, emotional and verbal abuse in the FLDS community are nightmarish. It is hard to believe that people can use the guise of faith to be so cruel to each other. Most disturbing were the leaders who preached strict standards yet lived in complete opposition to them. The lack of love and simple human kindness was overwhelming. I found it incredibly interesting that the more extreme the leaders became the more they discouraged education in every form including Bible study.

My older boys expressed interest in the book(since I was obviously so enthralled) but I don’t think I want them to read it quite yet. There’s a lot of talk about sex in the book. Not graphic sex or glamourized sex, but sex used as currency for power and as punishment. I am still working on teaching my boys that sex is sacred and an expression of love and commitment. I don’t want them to view it in this cruel, loveless form.

There are several groups in the valley that assist families leaving polygamy and I’d like to donate to those. If I could go back and talk to those cute little cleaning girls again(yes, with their bangs hairsprayed into a wave and clunky tennis shoes under their long dresses), I’d step over the cultural barriers and really, truly get to know them.

p.s. The storm has arrived. It’s a blizzard out there!