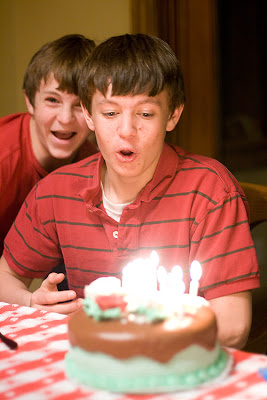 Ah, the sweetest of days– the busiest, craziest, messiest, wildest of days!

Ben jumped on the dating wagon ASAP by going out to breakfast with M at 6:15 a.m. He was giddy. They couldn’t find a restaurant open at that unholy hour and ended up at the grocery store buying cold cereal. Ah, young love.

The rest of the boys had far superior breakfast of chocolate waffles and whip cream– ya know, I feel like it’s important to feed my kids a nutritious breakfast when I know they are going to eat candy all day. 😉

The little ones were on hyper-drive gluing just a few more hearts to Valentine boxes, adding an extra candy heart for “special friends” and donning red shirts for the day. 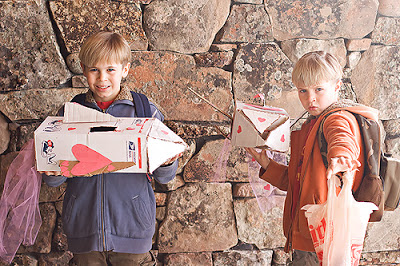 Anyone that feels sad or lonely on Valentines should visit an elementary school. You can just feel the love. The halls buzz with excitement and each class is partying: passing out Valentines, decorating cookies, love bingo, silly crafts, musical chairs and more.

In elementary school you give everyone a Valentine. You don’t have to love them; you don’t have to like them– you just give them candy and a card with no strings attached. And haven’t you noticed that just the act of writing someone’s name on one of those corny cards makes you like them even more? It’s kind of like the rush of affection you feel for everyone you address a Christmas card to(even if you are lame like me and rarely write nice little personal notes).

Once we were past the rush of parties and carpools I picked Ben up from the corner where he stands every day after school and talks to M for an hour. Doesn’t he know it’s cold out there? Off to the big event of the day– the driver’s license bureau!

Kids take the test from their Driver’s Ed instructor these days so there is none of the dreaded parallel parking out on the range– but the dreaded lines are still there. After a few wrong turns we arrived at 4 and were told we’d be lucky to be seen before they closed at 5:30. We waited and stressed and bought waxy donuts for Miss Mary as I directed the rest of the household by cellphone.

Ben watched the numbers being called and the minutes ticking by on the clock— it was going to be close. 5:30 came and our hearts sunk. But then, “813!” Benj jumped to his feet and shouted for joy. 5 minutes later he walked out a licensed driver. Glory, hallelujah!

In anticipation of this day we tracked down a car last summer. It’s a 30 year old Mercedes that was headed either to the junkyard or our house. It was free. Ben named it Helga because she’s old, she’s German and she’s a heavyweight. Erik has been storing it in his office basement and drove it home yesterday for the big birthday. We had worried that it might not last the year; Helga didn’t make it 3 blocks. She died in the middle of the intersection and could not be resuscitated.

Thankfully we did have another present for Ben– a new cell phone with buttons that actually work. 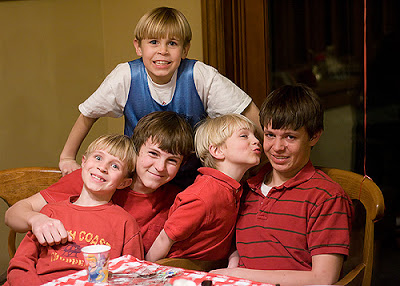 a rare picture of all five boys 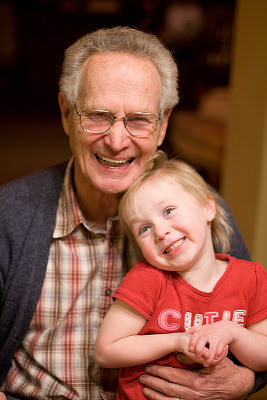 and Mary hamming it up with Grandpa Fritz

After dinner commenced the annual Valentine’s doorbell ditching. Even if you’ve signed the card it’s important to ring the doorbell and RUN! It’s so much fun delivering to friends and crushes that we came home, made more cards and set out again. Gabriel had such a panic attack at every doorstep that we sent him out again and again just for entertainment value.

Back home M called Ben to thank him for the roses anonymously delivered on her doorstep. Unable to resist a teasing opportunity the four little ones came in his room and circled Ben’s lamp singing, “Oh it’s a jolly holiday with Mary. Mary makes your heart feel light! When your day is grey and ordinary, Mary makes the sun shine bright!” 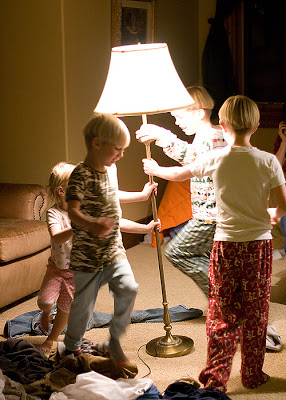 Oops did I just give away her name? Mary is a very popular name around our house.