My first memory of Kit and Kevin was on their wedding day. I received a frantic call from a neighbor, “Don’t go to the reception. There’s been an accident.” (I’d just moved into the neighborhood and knew nothing about the wedding or the reception.)

Kit was walking down the stairs, poised for the celebration to begin when the police knocked on the door. He brought the horrifying news of a car crash, less than two miles away that left Kevin’s 15 year old brother Darren dead, his 18 year old brother Ryan in a coma and Ryan’s girlfriend dead at the scene.

In the weeks and months that followed our entire neighborhood mourned. Happily, Ryan was restored to full health.

The L——–s are generally private people, but as they grieved for Darren they begin to talk and talk and talk. They acknowledged every blessing in their life, they shared passages from Darren’s journal, they spread a message of hope and peace to everyone who would listen.

Blessed with incredible musical talent, Kevin composed songs about Darren and sang often in church. I believe everyone who met them held their loved ones a little tighter and forgave old hurts. I remember watching them and thinking, “if they can do this, surely I can handle my small problems.”

But what a way to start a marriage! Kevin was playing basketball for the University of Utah at the time(a VERY big deal if you live in Utah) and Kit was finishing up at BYU. The strain of mourning Darren, studying for classes, nourishing his new marriage and playing for the famously harsh Coach Majerus was simply too much. When an offer came to play for a team in France, Kit and Kevin eagerly accepted it.

Fluent in French, K&K had met in France as missionaries. Kit remembers a bus ride where the 19 and 20 year old boys were discussing what they would do if their future wives got fat after marriage and children(missionaries are only teenagers, after all). The words were not kind, but Kevin spoke up and said, “It might happen, but I would just make sure we went on plenty of walks and did fun things and I would cook healthy meals. And besides, I would love my wife no matter what she looked like.”

Yeah, Kit knew he was a good one.

For the next several years K&K spent 1/2 the year in France playing with various teams and the other 1/2 in Utah living in Kevin’s parent’s basement(just a few blocks from my house). Kit had no choice about becoming my friend. I sought her out, I chatted with her, we ran together and ate dinner and made cookies. Kit is a golden ray of light. She is incredibly smart and funny and just bursting with faith in God and in all things good. I was determined to learn from her; to become just a bit like her.

Know this my friends, all of you– I have found you; I have sought you out; I intend to learn everything I can from your life and your stories.

K&K became famous as the neighborhood babysitters for vacationing parents. During the parents’ absence they created elaborate home movies with plots and costumes and special effects. Often, parents would come home and the kids would ask, “When can you leave again?” In church, small children scurried to nestle on their laps and Kevin was mobbed in the halls by small admirers.

But this couple who so clearly loved children, had none of their own. As the years passed, their worry and doctor visits increased. I felt incredible guilt telling Kit of my pregnancies with Gabriel and Mary when she was experiencing month after month of disappointment. But in her usual way Kit was thrilled for me.

Kit and Kevin responded to their 7 years of infertility they same way they mourned Darren: looking for the good, spreading joy and serving constantly. I’ve watched people retreat into themselves when grieving but they just kept reaching out.

During my pregnancy with Mary our family got in the habit of praying every night, “Please bless Kit and Kevin to have a baby.” And two years later–thanks to socialized medicine in France and the prayers and faith of many– sweet Kathryn(Ryn) was born. Elle came along just 15 months later. (Kit’s blog)

Sunday, Kevin held a surprise birthday party for Kit and for Elle who turns 1 at the end of the month. What do you think; do they look happy?

The party was held in the gorgeous greenhouse reception center Kevin’s genius mother created. I’m pretty sure she helped design the Garden of Eden.

Waiting for the birthday girls to arrive… 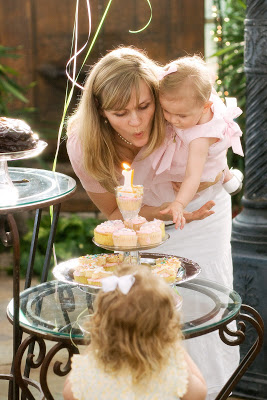 and then the autofocus went out on my 50 mm lens. has this happened to anyone else?

Elle loves Ryan the most.

Ryn and Xander are friends.