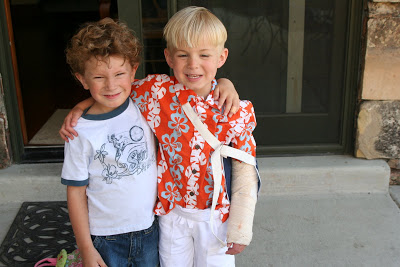 It’s been an eventful week at our house. Erik left Monday for a lunch-lady convention in Dallas, it was the first week out of school and Hans went to his first sleep-over camp.

Mary and Gabriel started swimming lesssons on Monday. I was sure Mary would be the star of the class because she is half mermaid. It was not to be. As we approached the pool we could hear the screams of the 3 yo class as the lined up on the pool steps. You would have thought they were sitting in acid or ice water instead of the pleasant 85 degree pool. Not to be outdone, Mary screamed with the best of them. She wriggled and cried and pretended to be afraid to put her face in the water. After a 30 minute screamfest we ate grilled cheese sandwiches and Mary proceeded to swim for another 4 hours. She swam between Stefan and I, jumped off the side repeatedly and wailed when we finally pulled her wrinkly body out of the water to go home. Tuesday was much the same but the teacher assured us that the 3rd day would be better.

Wednesday dawned dark and rainy. Not just rainy, but thunder, lightning and pouring rain. The kind of strom we rarely see in Utah. Every child but Ben was sleeping in my bed or on my floor. We bundled cute little Hansie up and walked him over to the elementary to attend a 3 day camping trip in Mill Hollow. The district offers this camp to 4th, 5th and 6th graders for just $55. Hans was really lucky to have a huge group of friends going. The friends were my only consolation since we were soaked just getting into the bus and they were expecting snow in higher elevations.

The rain continued non-stop all day and the kids settled into various games while I shipped out orders. Gabriel and Mary made a fort in my room outfitted with all their blankets and stuffed animals. At about 3:30 I heard a cry form the pantry. Gabriel had climbed the shelves to get cookies and had fallen to the floor. I scooped him up in a blanket and put him on the couch. Ever his little friend, Mary ran and got a bandaid. I uncovered his arm to put the bandaid on and immediately knew his arm was broken. It was misshapen and there was a large lump on the side. So, I put Stefan in charge of Mary, sent Xander to a birthday party and took Ben and Gabriel to Primary Children’s. It was so nice to have Ben with me to cheer Gabe up with jokes and show him fun things on his ipod. Stefan took equally good care of Mary at home.

Everone at the hospital took one look at sweet Gabriel’s arm and said, “oh no!” The gave him IV almost immediately and morphine for the pain. He was very brave and sweet– thanking the doctors and nurses. The x-rays revealed that he had broken both the ulna and the radial and they were displaced. It hurt just to look at the x-ray. 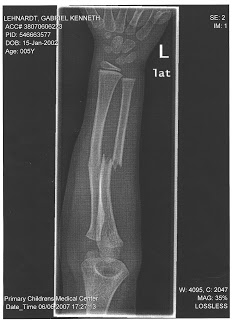 The drs. said that if Gabriel were older they would do surgery but at his age the body heals very well. But, they did say it was one of the slowest parts of the body to heal and that he would be in a cast most of the summer. They did what they call a conscious sedation to set the bone. It puts them out but they are still conscious and can be revived quickly. They also assured me he would not remember the setting. What they didn’t was that Gabriel would scream, writhe in pain and cry “Mommy, make them stop” during the entire 20 minute procedure. The orthopedic surgeon twisted his little arm every which way trying to get the bones to line up. it was sheer torture to watch. I wanted to tell the orthopedic to knock it off and the anesthesiologist to pump up the meds(he ended up pumping in 8 doses) but I stood there just silently crying and turning to look at the wall when it got to hard to watch. Ben was fascinated by the whole process — especially the instant x-ray machine that they used to check bone placement. But as a parent it was a lot to take. Erik assures me that he would have cried too had he been there and not in dumb old Texas.

But true to the drs. word Gabriel didn’t remember any of the torture and was really quite offended when I talked about him crying in pain. “I didn’t cry! I was a very brave boy.” We finally arrived home at 10:30 at night. And Gabriel was so hyper that the boys stayed up until 12:30. I have rarely been so proud of Ben and Stefan. They took amazing care of their little siblings and were so kind and sweet.

Thursday also dawned cold and rainy which was a blessing for a little boy who needed to lay low. Everyone spoiled him with cookies, movies and games. Erik came home in the early afternoon and we were all so happy to see him! 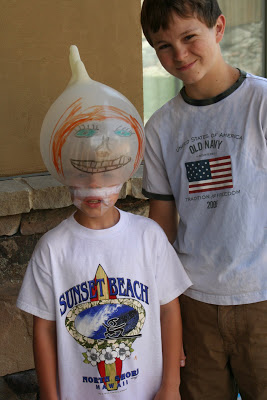 Friday was finally warm enough to go back to the pool. Gabriel came along to show off his cast and garner sympathy. And Mary! Amazingly, she jumped right in the pool and swam happily during her entire class. That teacher knows her stuff. Isabelle Strong came home from swimming with us and played all day. She and Mary had toy cell phones and talked to each other like little teenagers. 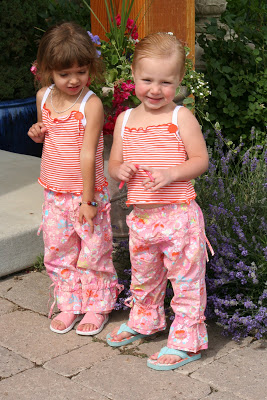 Hansie finally came home Friday afternoon. it was only 3 days, two nights but we missed him so much. The house was , of course, full of children but we were constantly looking around for our little Hans. The first words out of his mouth as he walked across the school lawn were, “Guess what Mom? I threw up!” We did a lot of laundry and he told us about playing in the snow– ick.

I taught the Gospel Doctrine lesson on “Woe unto ye hypocrites..” today. Essentially the whole message is to be nice to other people– stop judging others and you’ll be a lot happier. It was a hard lesson to prepare for– tons of material and events and a sensitive subject matter. You never know what direction the comments will go in a lesson like that. But it went pretty well and I had a lot of nice comments on it. I really enjoy preparing and teaching but I almost always get very self-conscious the day of the lesson. Last night I dreamt that I walked into the classroom and there was no one there because they had heard I was teaching. I only teach every other week and we’ll be in Idaho two weeks from today so I have a whole month off. Woo hoo!