“What would your mother say?” 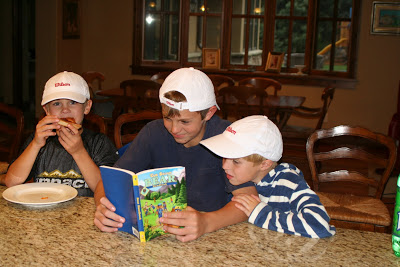 these boys are so desperate for reading material…

Wow. Church was crazy today. Erik is out of town so I braved it myself. We arrived a bit early but the chapel was completely full and we had to sit in the overflow in the gym. Yes, it’s just a few yards from the chapel but it’s the GYM!– and it puts everyone in gym mentality. I refereed the entire meeting as the nudged each other, giggled, drew dumb pictures and squeezed each other’s arms until bruises appeared. I took Mary out to the bathroom and apparently Hans and Xander got into quite a tussle while I was gone. The old lady behind them leaned forward and hissed, “What would your mother say, boys?”

Ben retorted right back– “They are just fine!” I didn’t hear about the incident until after church but I have to admit I laughed out loud. I think I’ll have the boys sit with her next Sunday. 🙂

I taught Sunday School today and I opened with an apology to everyone who sat near us and a story from a few years ago:

A man approached me after Sacrament Meeting and said, “You are an amazing, woman!” It was another Sunday that Erik was out of town and I thought- “You are absolutely right, it’s an amazing task bringing these kids to church by myself.”

He went on, “I saw your marathon time in the newspaper yesterday, great job.” Despite my sore legs I had already forgotten the marathon completely. Getting kids to church is a MUCH harder task. I’ll take the lovely solitude of a marathon any day.

After church Stefan played phone grenade with Mary. It works like this– he presses the buttons on Mary’s toy phone and she, quite predictably, blows up in anger. I try to explain to them that they shouldn’t take pride in making Mary explode; it doesn’t take any skill whatsoover.

In an effort to earn money Hans has been giving laundry basket rides all afternoon: 5 cents for a ride all around the kitchen(only Gabe paid up). I didn’t take much note of this until I realized grand finale is a push straight down the stairs. 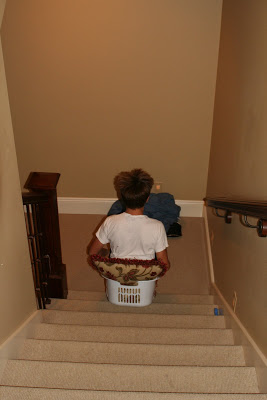 Drinking out of the toilet