why your teenager might actually be happier without a smartphone 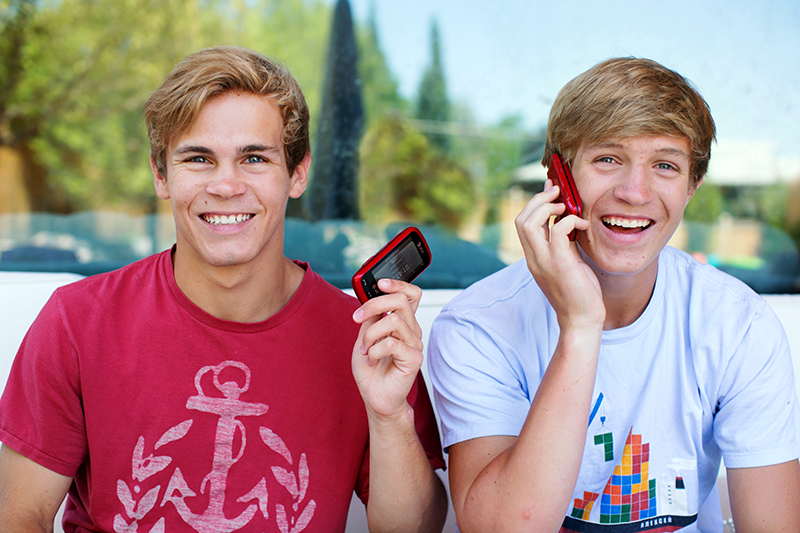 Darling Hansie just texted me from his cousin Lizzy’s phone during their senior trip to San Diego, “Hey this is Hans. I went surfing with my phone. It might survive, but probably not. I’m so sorry.”

I read his text, laughed out loud and went to ebay where I quickly found a replacement. His sturdy red phone served him well for three years and $16.73 to replace it felt perfectly reasonable. Our AT&T store doesn’t even sell basic phones anymore– we’re starting to feel like rebels.

A handful of kids we know are still hanging on to the old phones. Most of them own the same model– a little LG slider. It’s a better phone than you might think. It receives texts, calls and even photos (as long as it’s not a group text)  just like it’s fancier cousins; it also holds lists and a handy little calendar where Hansie notes every appointment and assignment, game and party in his impossibly busy life. As a bonus, those phones are practically indestructible. The screens never break, they can be dropped repeatedly and even submerged in water– just not for quite that long.

Trust me, I don’t think you’re a bad parent if you buy your kid an iPhone. You’re not a bad kid if you’re using one. Some of my favorite teenagers on earth own smartphones and use them responsibly– Abby, Lizzy, Jake, Sam, Claire, Chet, Louisa, Ezra… But honestly, I they’re a rare breed; these kids have tremendous impulse control and extraordinary parents. I think if everyone at my house had iPhones and iPads and iTouches and iEverything, I’d be constantly scolding and monitoring and sending them outside to play. I think we’d talk less, read fewer books and spend too much time watching other people’s lives.

My kids will tell you we’re not strict parents and we have far more laughter than rules at our house. You might think Hans and Xander are constantly begging for an upgrade from their basic LG phones, instead, they thank us over and over for their little red phones. Why? They’ve seen too many kids lose themselves to their phones. Friends who used to talk and throw a Frisbee during the lunch hour are now obsessed with their Twitter feed and how many likes they’ve received on Instagram.

People seem to think we’re extremists when they hear my kids don’t own any devices beyond basic phones. In truth, we still spend too much time looking at screens. Thanks, or no thanks, to Amazon and Netflix, my younger kids have read fewer books and seen far more movies and television shows than their older siblings. Mary can quote from a dozen Studio C skits while Xander can give you a rundown on all the best TED talks and YouTube science programs. They’ve all spent hours and hours on Khan Academy learning math and computer programming. Xander, Hans, Mary and Gabe regularly grab my phone to check Instagram, play Angry Birds or study French and German on Duolingo. And you know what? One smartphone is enough for the five of us.

As much as possible, I want to gift my younger kids with the creative, active life I provided for their siblings. And they agree. Maybe it’s because we know ourselves? Our family trees on both sides are full of alcoholics and philanderers. We know we are prone to addictions; we know we need to be careful. Just yesterday, Stefan and I talked about the day several years ago when he asked if we could buy Skyrim, a game he’d heard about from many of his friends in high school. We looked up the game together and the moment we saw it was rated M for Mature we both said “never mind.” I didn’t think much about it at the time, but Stefan said he’s been grateful many, many times since. “I could have lost myself to that game. I’ve seen it happen to so many people.”

Even Mary, with her happy life of ballet and baking, cello and sewing and swimming, knows she need to limit her time on Instagram. If she looks at it daily, she starts to feel like the only little girl in Utah who hasn’t eaten lunch at an American Girl Doll Store. Let’s face it, don’t we all suffer from a bit of Instagram envy from time to time? A fair amount of high schoolers can handle a smartphone’s constant access to social media etc, but those venues can be especially dangerous for younger kids.

Why, during the most vulnerable, insecure years of our children’s lives, would we put a device in their hand that allows them to compare themselves to everyone else nearly every minute of the day? Thanks to social media, kids can see every party they weren’t invited to, every girl who racks up 500 likes on her selfie.  I’d rather let my kids remain blissfully unaware of the latest swimsuit pic and rocking party.  I follow several of my kids friends on Instagram and even more of them follow my feed. While most of the older teens offer happy, interesting updates, the majority of younger kids (with a few lovely exceptions) seem to be screaming, “like me, like me, like me!” I’ll give a kid a few chances– but after I’ve seen a fifth grader post several provocative selfies or a 12 year old repeatedly post crude gestures and “my friends are cooler than yours” photos– I unfollow them because A. it makes me sad and B. I don’t want to be judgmental. When I see those kids in person, I want to love them as complicated and extraordinary human beings and not recall their last stupid photo.

Gabe tells me several of his classmates talk about the latest Instagram or snapchat or Twitter post all day long. I know his lack of a phone leaves him out of the loop, but it’s a loop he’s glad to be out of. He spends plenty of time with friends who appreciate him simply for himself and he’s too happy to worry about how other kids spent their weekend. Besides, studies confirm, kids who are socially precocious at 13, deal with serious consequences later . That pattern has held true for every one of my children– they aren’t the cool kids in junior high, but the interpersonal skills they develop at home and with trusted friends pay off in high school.

It’s hard enough for adults to manage a smartphone, but for kids with developing brains, those constant distractions can be dangerous. One child might be ready to own a smartphone at sixteen, but will his younger sibling have the same impulse control at that age? It’s easier to make a rule for the entire family rather than make one child feel singled out.

Our friend’s son recently confessed a pornography addiction to his parents. Since he was primarily accessing porn on his phone, the boy willingly relinquished his iPhone to his parents. But when he switched to a basic phone he received a barrage of questions, “Why are your parents punishing you?” “What happened?” His mother told me she desperately wishes she’d never given him a smartphone in the first place. In this boy’s case he might have avoided a pornography addiction, but for many other kids, holding off on buying a smartphone might help them concentrate on schoolwork, improve face to face social skills, or simply make better use of time.

I hear about all kinds of complex guidelines parents set up for smartphones and their use can be huge source of contention for some families. You just don’t need very many rules for a dumb phone. Yes, phones should be put away while driving, during dinner and after bedtime. But in general, responding to texts and calls, doesn’t cause much family friction. I’m sure many parents are experts at monitoring phone use and disciplining with love and wisdom, but for our family, it’s easier to just have one less thing to worry about. Fewer rules equal fewer fights.

Sure, you can block websites and even the internet on a smartphone, but people can text pornographic images to your child any time. My boys are often involved in group texts with dozens of people. Images are sent during those conversations, but their dumb phone translates it into a web link (which they could look up but they never bother). Many times, someone sends a shocking image during a group text. This just happened in a group text with over 200 kids at Skyline while planning a senior prank. One kid posted the sort of selfie no one wanted to see. For the kids with smartphones, the image popped right up, but the kids with basic phones only saw a random web link. Also, kids with basic phones are simply putting less of their life on the internet and that lack of sharing protects them.

And don’t we all wonder about the money? Even with fabulous deals and usage plans, those phones must be a financial burden for a lot of kids and parents. I know many teenagers pay for their own phone and usage. While learning to work is good, taking on too many monetary responsibilities as a teenager detracts from their education and personal development. It reminds me of our friend who desperately wanted a nice car in high school and worked so many hours to earn that car he didn’t have the grades to get into college.

Basic phones (about $50 new and $9 a month usage fees) reduce financial stress for teens and their parents. My reaction to Hansie’s drowned phone wouldn’t have been quite as carefree if he’d ruined or cracked the screen of a $300 phone. We’d have to set up some sort of plan where he paid half or all of the replacement costs—it would be an “issue.”

As I said before, I promise, I’m not judging anyone who hands their kids the latest iPhone. Several of my favorite teens carry one in their pocket. But if you buy your teen a little red flip phone, I promise they won’t be alone. And they’ll probably thank you for it.

the temple, a new job, Lizzy, Germany, girls’ camp and everything moving way too fast