Ah this was a good week! Stefan departed for Scout Camp at Bear Lake Monday morning (he was happy to miss his violin lesson). We missed him terribly all week but he returned Friday night tanned and happy having collected 7 merit badges with nothing between him and his Eagle but the dreaded Eagle project. Erik went up to the camp Thursday and Friday and took the boat. Ben also left Thursday morning for Youth Conference so it was just me and the little ones for a few days.

Gabriel finally got his cast off. His arm has a lump on it and you can feel the bone protruding. The doctor said he may have that lump for the rest of his life. Unhindered by his cast Gabriel learned to swim on Saturday. I think he was simply tired of hearing what a fabulous swimmer Mary is and decided to join the fun.

Mary, Gabe, Grandpa Ken and I went to a wedding reception in American Fork for Kevin Briggs Thursday night. Mary was amazingly charming. She’s getting nicer all the time. Hans and Xander stayed behind at Grandma Zoe’s for a marathon swim and Uno game. 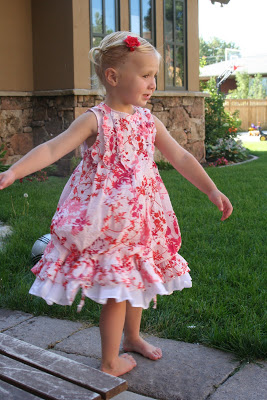 The four little ones went to the zoo with Grandpa Ken on Friday. They stayed half the day! I think they wore Grandpa out. 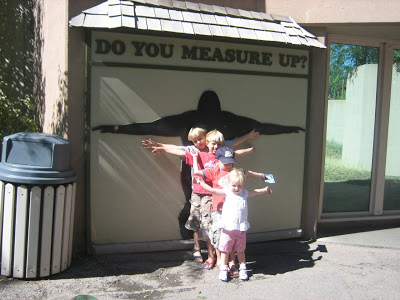 Saturday morning Erik and I ran the Provo River Half-Marathon. Erik did amazingly well with a time of 1:25 and I had a respectable time of 1:39. I haven’t raced for a long time and it really felt good to run hard and long like that. Running is so different from most trials in life– with most things your mind says “no” and your body says “yes” but in running your body screams “no more” and your mind says, “oh, yes you can!” So now we’re deternimed to train for some more half-marathons and run the St. George Marathon next fall(Erik’s first). It’s hard to find races that aren’t on Sunday but thankfully Utah has quite a few.

Ben arrived home yesterday afternoon from Youth Conference. He had a great time. The boys his age in the ward exclude him so he buddied up with a younger boy and dove headfirst into every activity. The bishop’s wife came and talked to me about him and went on and on about how fun and sociable Ben is. He chatted with the girls, included people who were lonely and did every activity w/o complaint. So that was nice to hear.

Kit and Kevin called today and we hope to see them this week.