No one was/is more proud of Stefan’s ACT score than my brother Mike— he paraded around his office announcing the news, called all his friends and bragged to any stranger who would listen.

A few days after receiving the news he sent me a text of this photo:

Stefan– age 2
Moments later he called me, “I have a lot of Skymiles. I’m sending you and Stefan to Boston, he needs to look at Harvard.”

Did I say yes? Of course. Did I cry? Yes, oh yes, I can’t imagine a sweeter gesture from my brother.

Everyone who knew me as a little girl was aware that my fondest dream was to attend Harvard: I read books about it, scribbled ‘Harvard’ in notebooks like a boyfriend’s name and wore my singular Harvard sweatshirt to shreds. That dream persisted until my senior year of high school when I obtained an application and learned that Harvard offered no financial aid to middle-class white girls. BYU offered what I needed and I don’t regret my life path.

Stefan doesn’t need to fulfill my dream (he has plenty of his own) but I want to offer him that option, the chance to look.

Harvard Yard
At the airport and on the plane, neither Stefan or I could get used to the lack of little people. Stefan kept turning his head from side to side–“I’m just used to looking out for my siblings.” he explained. Traveling with one child– especially a seventeen year old who is more responsible that me– is GLORIOUS.
yes, Mary and Stefan are out of focus and the fence is nice and sharp. I make mistakes like that all the time.

Once in Boston, darling Mary Staples met us at the subway stop and we strolled to her apartment. Mary is the original ‘101 pounds of fun’: the ultimate hostess, the cheeriest friend, the most creative decorator. I feel pretty cool to have a 25 year old friend to call on for visits to Beantown.

Converted from a hotel, Mary’s apartment building has an old-world sort of glamour. Although there is an elevator at the beginning of this hallway, Mary always walks to the elevator at the end in order to soak in the ambiance. That’s just the sort of quirk I love about Mary.

The couch and air mattress were all made up for us with cheery quilts and Swiss chocolates on our pillows. Can you imagine anything more fitting for Boston than lobster shaped flags? Told ya, she’s the hostess with the mostest.

a peek at Mary-style

the chalkboard over her stove–Mary truly lives these words.

Mike told me we HAD to eat at the Chart House. How could I disobey? Stefan and I shared his first lobster.

First thing in the morning, we indulged in the famous Boston Duckboat tour; it’s the kind of thing you never do with six kids, but it seems completely reasonable with one.

And then, off to Harvard. By the time we reached the station, I was giddy– Stefan had to keep a hand on my shoulder to keep my feet on the ground.
We attended an informational meeting and then a tour given by current students. Some really cool things about Harvard:

1. the first week of school is called ‘shopping week.’ Students may attend as many classes as they desire and at the end of the week choose the 4-5 courses for the semester. Classrooms are changed to meet demand; not the other way around.

2. over 500 student groups are offered on campus: 5 orchestras, rowing, fencing, football and of course, an LDS Institute.

3. all freshmen live on campus, and not just close to campus but on Harvard Yard in buildings like this:

4. even better, all freshman eat in Annenberg Hall. Doesn’t it remind you of Hogwarts? I had to steal this photo from the internet since they don’t allow photography in the hall.

5. those eleven AP classes Stefan has been toiling over? Harvard won’t give credit– but they are awfully glad you took them and they might help you get in.

6. they quote the Bible on buildings; I like that, I really like that.
7. After freshman year, the student body is divided into houses where they spend the rest of theur undergraduate career. Each house has it’s own dining hall, fitness center, photo studio etc. Are you sensing a Hogwarts theme? This is Lowell house.

8. the Harry Elkins Widener Library was built with donations from Harry’s mother after he died on the Titanic. According to legend, the funds were donated with three stipulations: 1. every student must pass a swim test in order to avoid Harry’s fate. 2. an exact replica of Harry’s personal library must be placed in the center and one page of his Gutenberg Bible turned each day. 3. because another building was torn down to make way for this library and Harry’s mother worried that someone more rich and powerful than her might tear this library down, she stipulated that no brick, column or mortar could be removed. In 1997, the college realized that she never mentioned the foundation– they dug four stories down and one hundred yards out across the yard to create what is now 57 miles of bookshelves and over 3 million volumes (and that’s just one of many libraries on campus).

I borrowed this photo of the library from Mary. She takes fantastic photos– visit her blog, you’ll be completely charmed. 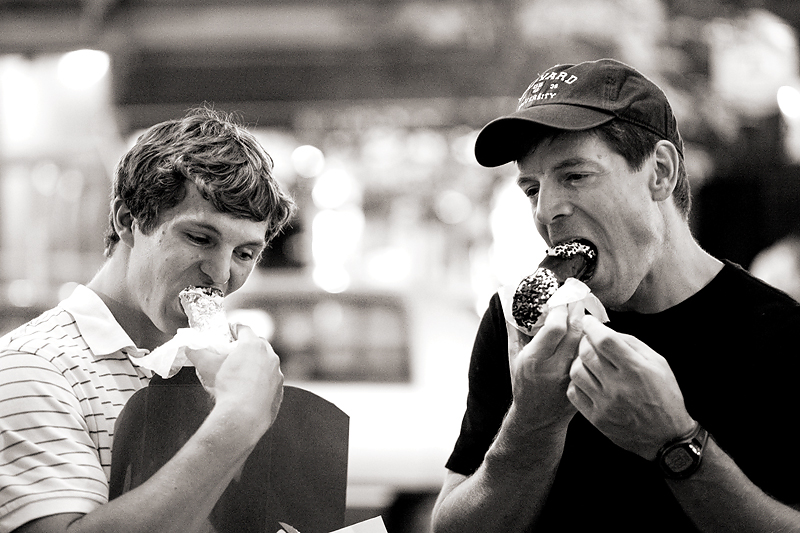 Erik flew in at the tail end of a business trip to meet us.

After eating at Giacomo’s (you MUST go there if in Boston) and indulging in cannoli from Mike’s Pastry, we walked over the Harvard Bridge to visit MIT the next day.

I’m afraid we fell in love with MIT too. The highlights:

1. in January, students don’t have to be on campus and there are no required classes. However, there are over 300 optional classes– everything from chocolate making, to charm school, snowboarding, Eastern Religions and knitting. For people who love to learn, it’s an absolute fantasy. If Stefan attends MIT do you think I could spend all of January with him?

2. no classes are held between 5-7 pm in an effort to encourage students to participate in extracurriculars. MIT is known for excelling at ‘pirate sports’: rowing, sailing, fencing, shooting etc. Heaven for my sword weilding boy.

4. Yes, the most common major at MIT is engineering, but you can also major in French, English Literature and all kinds of Liberal Arts majors.

5. Students at MIT have temporary dorms and temporary roommates the first week; they want to give everyone a chance to find the place they are most happy.

6. MIT students are proud of being nerds– as our tour guide said, “We all like Star Wars and Harry Potter.” The gift shop is full of t-shirts emblazoned with “Nerd Power.” Stefan took one look at this tee for Hans and said, “Oh, that says M-I-T in mathematical terms.” Hmm, would have taken me all year to figure that out; I guess Stefan really is smart.

For now, preparing for SAT subject tests and filling out applications for schools and scholarships are like a part-time job for Stefan. His decision will come down to acceptance letters and finances. But I am so, so grateful that he has choices. I’m indebted to his wonderful teachers and to Ben, who led by example. It’s amazing to note how many people it took just to make this trip possible: my brother for the tickets, darling Mary and her brilliant husband Derek to host us, our adorable friends Kit and Kevin who watched our four younger kiddos while we were gone.

I don’t know what Stefan’s dream is; he doesn’t know. But I am grateful to all those who help him along the path.