In Russia, men do not cry

It’s been a rough week for missionaries. Monday mornings I always check my email early as I search through the spam for my email from Stefan. This last Monday, my heart stopped when I read of the death of a 19 year old  missionary in Sweden on Sunday. His family. His heartbroken family.

As parents, we know missions are inherently safe. We only hear of more deaths because there are more missionaries serving. But we also send off our sons and daughters with the knowledge we may never see them again. Remember my long hug when Ben came home? That’s because I worried every day– even on his flight home– that he wouldn’t come back to me. I’m so grateful he did.

Missionaries also worry for their loved ones at home. I know many who have lost a parent, a grandparent and even a sibling while serving on the other side of the world. But the worst story I’ve ever heard came out last Monday morning. Elder Ian Parrish was serving in South Dakota, his sister, Sister Jenson Parrish in Washington state. Their entire family in Pocatello, Idaho died of CO poisoning: Mom, Dad, two younger brothers.

Just thinking of their grief flattens me.

The news of the Parrish family also came on a Monday. The same morning I read this email from Stefan:

I’m sitting across from two guys playing computer games. One is  an older man, serious, and he gazes at the monitor and thinks long before pressing keys. The other is maybe twenty, smiling and busily tapping away. I know neither of them. I don’t know what brought them here, why they are playing games on a monday afternoon and who their loved ones are. I don’t know why the older one seems so tired, why neither of them have shaved. We only see our own monitors. We’re all in separate worlds.

One is superficially entertained, the other is as well, and I am crying.

For the past couple of weeks, we’ve been meeting with a less-active brother in an area far from our apartment. The sisters were working with his wife, but they wanted us to be friends with him. He had been inactive for a long time, but had come back to church in October. After that, he got pneumonia and had to stay home. He felt lonely and wanted someone to talk to. We met with him and brought him juice, listened to his pains and talked to him about God. He wanted to come back to church, wanted it so badly, and wanted to bring his friend back with him too. We were excited to help his friend who had rejected his calls.

He wanted to meet more often than we did. It’s understandable. He lies in bed all day recovering and we are always busy. I remember he called us the day after a meeting and asked when we would come over. We had so many things we had to do, I told him that we could see him next week. He just wanted us to be his friends. We went by one day, and he was walking. We marvelled at his recovery and he said he would probably be in church on Sunday. We talked to him a bit about how he has already gotten an answer about the Book of Mormon even though he didn’t hear a voice. He described the feelings he had when he read and I testified that they were his answer. He seemed reassured, and then my phone rang. Some emergency about a phone. I had to make another call right there, we said a closing prayer and left. Two days later he died.


I thought this morning about all the people I’ve said goodbye to, and all those I’ve simply left. Some of them were friends, many were simply acquaintances. Some were friends for fleeting moments. All of them share the same trait of having moved out of my life. They may not have seemed like much while they were here, but they leave a mark. We look back and love them, but cannot say it now. I thought this today and was quiet, but then went out the door.


When I sat down to write you, I read President’s letter. He included a poem about how he left his childhood friends and they all went on different paths of life. It hit my heart, but only one tear fell. In Russia, men do not cry.


And then I read your letters.

And I saw the picture of Ben.

We can only hold on to so many people, we can only talk to so many to keep one another familiar. I’m holding on to you. My companion’s leaving to another city. I hope to see him one day. But I’ll see you. I left Perm, and someday I’ll leave Chelyabinsk with hopes of returning. But I’ll return to you.


So here I am, furiously blinking, preparing to go back into the world. I should have brought a kleenex, a handkerchief, anything; my cheeks will freeze solid. I’ll tell more people that God has a plan for them, that He’s gathering us all home and hope that they can see the comfort, the truth, and the glory in this book we have.I’ll hope that they wait for Him to show them that this is what they have always been waiting for before they turn me away. I’ll offer it and offer it and offer it. It’s all I’ve got.


So I’ll keep going, knowing that I’ll see you again. Knowing that in the end, that’s all that matters. Someone else, someone here needs to know this too. Maybe the sad and tired man across from me. 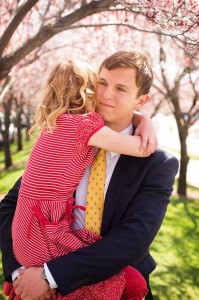