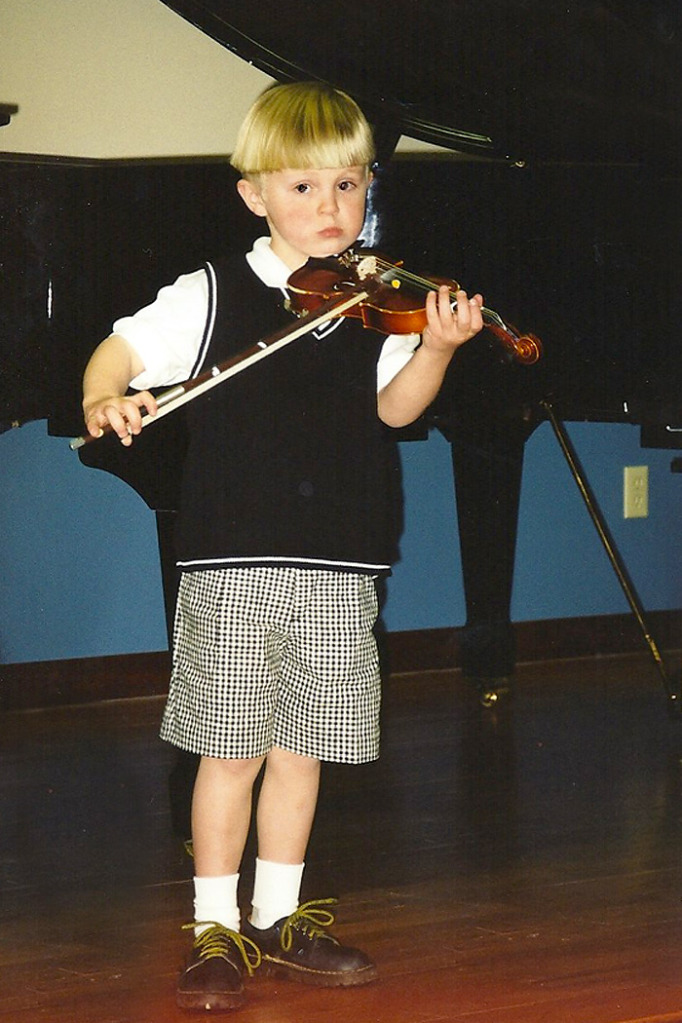 It looks cruel to me now– the photos of my four year old boy with a violin crooked under his neck. We did the group lessons, the workshops, the charts and flashcards, listened to recorded pieces almost constantly, practiced as Shinichi Suzuki suggested, “only on the days you eat” which included holidays and vacations. Tiger Momma had nothing on me in those days. 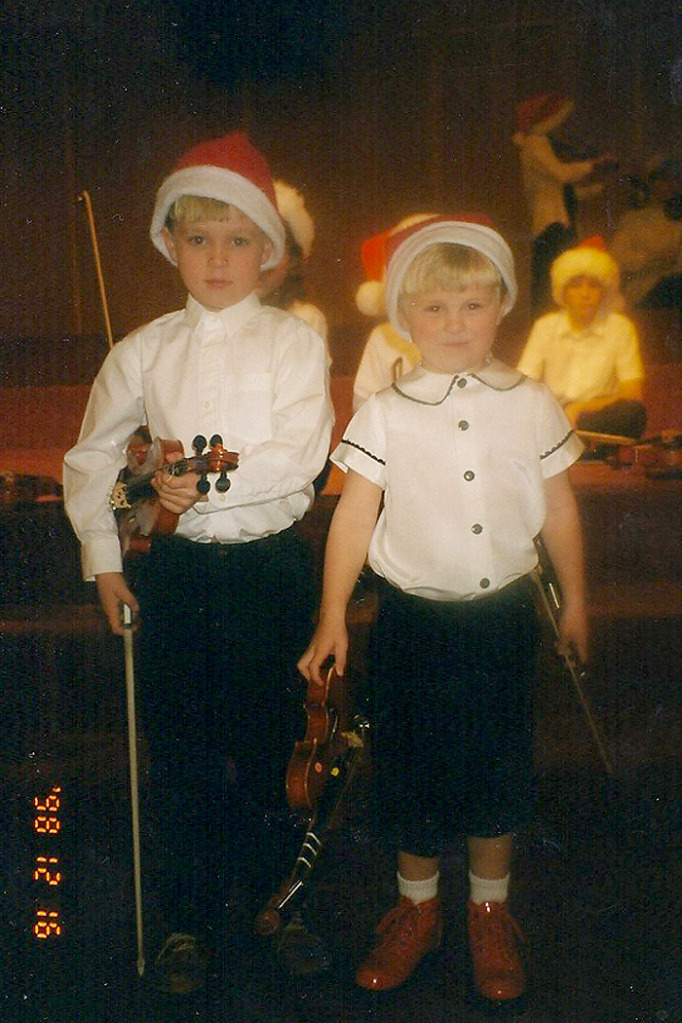 For the most part, Stefan thrived on the discipline, sailed through the curriculum and was playing the Bach Double with Ben by third grade (though not quite on the level of Stern and Mintz). His progress (along with everything in our family) slowed down a bit with Mary’s arrival, but violin has been a constant in his life for more than thirteen years. It’s a good gig– have you ever walked into an orchestra room?- dozens of gorgeous, polite girls fill the chairs; firm friendships are created and there is the innate satisfaction of adding more beauty to the world. Anytime Stefan is stressed or worried, he comes home and picks up the violin, filling the house with concertos, allegros and sometimes, often, theme music from Harry Potter or Star Wars.

On this night, Stefan’s efforts at the violin redoubled. More than anything, he wanted to participate in Concerto Night. With his extraordinary teacher, he auditioned several pieces, settled on his concerto and got to work. For the past twenty months, he has rehearsed two to three hours a day– when our family settles down to watch a movie, he slips off to the office to practice his scales, he’s become a familiar fixture for my running friends– his silhouette through the window as he practices at 6 a.m. 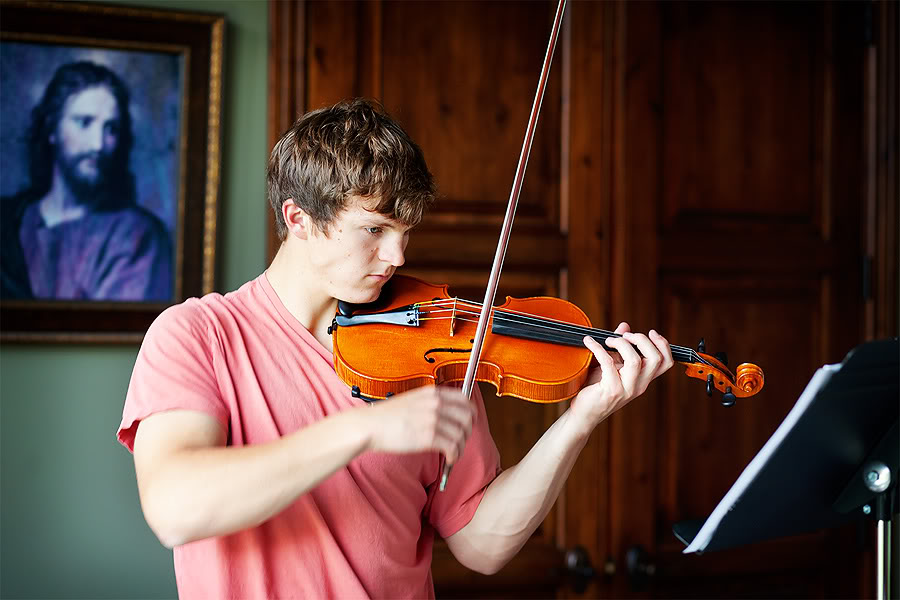 Our school is a magnet for college professors who want the best high school experience for their children and for all the old music families who train generations of prodigies. Living in this unique little pocket of musical and academic talent; we knew the competition would be fierce. And Stefan’s year is the most talented batch of kids we’ve ever seen– dozens of bright, good kids who’ve devoted themselves to notes and scales.

As the audition crept closer, Stefan increased his practicing to three to four hours a day, he studied scales for perfect intonation, sang the piece for more musicality, worked with his teacher on dynamics and showmanship; Praeludium and Allegro has more than a thousand listens in our iTunes account. Every night he performed it for us and in the last few days before the audition he stopped by each of our neighbors homes to practice playing for an audience. All this while finishing college and scholarship applications, Sterling Scholar, six AP classes and taking the SAT for the National Merit Scholar contest.

In typical Stefan fashion, he was cheerful and calm about everything; the audition went well and he said the judges cheered at the end: “That was incredible!” “How can a person move his fingers so quickly?”

So he wasn’t nearly as nervous as I when the list was posted yesterday.

And his name wasn’t on it.

He called me, delivered the news matter-of-factly and went off to rehearse in the pit for the school musical (which is where he is again– all day long on a Saturday). Because that’s what instrumentalists do– they play in the dark, beneath the stage, while others stand in the spotlight.

Later, he came home and we all cried and raged a bit. Why? He’s not the only disappointed one: his friend Danny, who seemed like a shoo-in with his flawless Tchaikovsky, was also passed over, the first chair cellist didn’t earn a spot, all the brass were left out.

It’s a different sort of disappointment when you have truly done your best. Stefan stood with his hands out, “I couldn’t have done anything more.” We’ve all had times when we threw something together, didn’t get the award and knew it was our own darn fault, but to have worked so hard, for so long– it’s heartbreaking.

Oh, I know there’s a silver lining. His increased determination these past years have made him a much better violinist. But I also know what happens to boy violinists in college. The path to a career becomes so intense that music, by necessity, slips to the side. Concerto Night would have been a marvelous opportunity to celebrate his work of the past thirteen years.

Stefan will certainly have other successes; I believe that everyone who works hard and lives with a kind heart has delights and surprises beyond their imagination in their future.

Sure, we have to buck up, count our blessings and move on. We need to congratualte the kids who made it and Stefan has to learn all of their concertos to accompany them come March. But for now, I am sorrowful. My mother heart wants every happiness for him. We could certainly use some kind words; I could use a mother of my own.